Thoughts From My Experiences With Daylilies

Thoughts From My Experiences With Daylilies 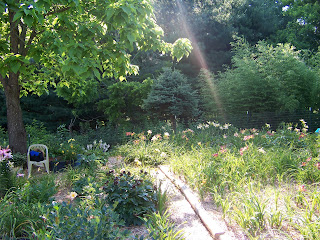 I have been growing daylilies for nearly forty years. My first encounter with the genus was with the clone of H. fulva known as 'Europa'. My grandmother had this old-fashioned ditch lily growing here on the farm. There is no daylily more vigorous than 'Europa', so perhaps I will always be biased to what a daylily should be in regards to vigor and hardiness, especially as a landscape planting.

My first cultivars came from Gilbert H. Wild and Sons of Sarcoxie, Missouri. Throughout my childhood and into my teens, most of the daylilies we grew in my family came from the Wild's catalog. Most were Wild's introductions, though some were cultivars bred by other breeds that the Wild family sold through their catalogs. Over the years, I have heard disparaging remarks about the Wild cultivars from some daylily hybridizers. Usually the line of reasoning being that the Wild cultivars are somehow less than other breeder's cultivars because they weren't pedigreed or because they were mass produced and sold in large numbers, etc. My experience would indicate that they are not generally inferior. Some in fact are extremely good daylilies and are generally very strong cultivars that survive well, are vigorous and have surprisingly modern forms, many of which we would now call "unusual form".

Other cultivars from the Wild's catalog that we ordered and grew were from such breeders as Hall, Fay, Flory, Spaulding, Stout, etc. So my early experiences with daylilies were of older, very hardy, strong daylilies that displayed a lot of vigor and survivability. I only ever had one major problem daylily cultivar from the Wild catalog. It was a plant called 'Edged In Gold' and it died the year after it was planted - a foreshadowing of things to come in later decades.

In my twenties, I began to order daylilies from other sources. These included many Munson cultivars as well as other newer daylily cultivars from the late 80's and early 90's. Most of those daylily cultivars were strong growers, but a few showed problems I had never seen before that were a surprise to me at the time. These problems seem to be amplified in many daylilies now.

As I entered my thirties around the year 2000, I again went through a phase where I bought a good number of daylilies. My focus at the time was on pink and lavender colored cultivars. While a few of these were good, strong plants, a great number were of surprisingly bad coloring, poor growth and/or poor performance. I have very few of those still growing in my garden as of this writing.

Around 2004-2005, my aunt had built a new house and started buying some of the newer piecrust type tetraploids. A few of these were nice plants, but the majority left a lot to be desired. This was our first introduction to really bad daylilies that displayed multiple problems within each cultivar.

In 2010, I began to actively and intentionally breed daylilies and added a large number of cultivars through to this year (2012), in order to bring in diverse, new genetics. In total, we have now grown over five hundred cultivars in the course of nearly four decades. We still have over three hundred cultivars, but I am now certain that I will be eliminating a good number of cultivars as there are many of the cultivars I have brought in over the last three years that just have a large number of problems and I won't feel comfortable breeding from them. My many years of breeding many organisms convinces me that if you use breeders with problems, you will perpetuate those problems into later generations to some extent.

I wanted to give the above timeline of my experience with daylilies to show that I have a good deal of experience and understanding of daylilies, so that as I critique some of the problems I see in many modern daylilies over several blog posts, you won't think that I am a newbie being unrealistic. I see several traits in the current direction of modern daylilies that I think are problems and will decrease the popularity of daylilies with the general gardening public. This may not matter to some true daylily fanatics, but to me, that viewpoint is myopic and will lead to daylilies being a more and more esoteric niche only for such fanatics, rather than the general, wonderful garden plant they have been in the past.

As the daylily has advanced over the years, phenotype extremes has become the focus of most daylily breeders. This is a typical direction of all organisms that are bred by humans. Whether animals or plants, breeders are always striving toward greater extremes of phenotypic traits and the ever desired novelty of 'uniqueness'. While this is entertaining for the devoted, it can be unproductive for the organism. We see this in purebred dogs, double-muscled beef cattle, exhibition and production chickens, as well as a wide range of flowering and fruiting plants. Since humans tend to get caught up in external minutia, focus is often given to details while the basic traits that produce strong, vital, vigorous organisms may be ignored in favor of fads and extremes.

Since daylilies are grown for their flowers, it is only to be expected that most of the focus of breeders will go toward producing ever more extreme and interesting flowers. However, that focus can allow a large number of undesirable traits to creep through and become established in many lines. Some of the traits that I find most undesirable include lack of vigor, poor foliage (of which there are several types of poor foliage/foliage problems), slow increase of fans, poor disease resistance/lack of resistance to various insect pests, weak stems that do not hold up the flowers, short stems with the flowers in or under the foliage, spottiness of the flowers, poorly opening flowers, lack of sun and/or rain resistance in the flowers, lack of drought tolerance, inability to thrive without constant fertilization, twisted and/or deformed flowers, plants that not only don't increase but consistently decrease in size in normal garden conditions, plants that simply die in your garden and flowers that look nothing like the breeder's promotional picture in their catalogs and on their websites. I'm sure there are other negative traits as well, but these are the ones that I find most annoying and have the most potential to turn off average gardeners.

Now it is important to point out that a daylily can thrive in one zone, or even microclimate within a given garden, but not thrive in another. That is the nature of the beast. Daylilies are often variable and they are strongly influenced by their environment, but there are many daylilies that are consistently good performers in most any environment, so it is possible to produce daylilies that can thrive in diverse settings. Why is it though that some daylilies now seem to show poor performance in many settings? There are a variety of reasons that we could point to, but they all add up to the same basic things - too much pampering and ignoring problems in favor of flower phenotypes.

In future posts, I hope to look at various plant habit traits and discuss why those phenotypes fit any given category of daylily I may be selecting for. I want to look at the traits that make daylilies more enjoyable to me as well as the traits that make them less enjoyable. Please be aware that this post only applies to the standards I set for my own daylily breeding and growing project and should not be seen as indicating that I am offering advice or taking anyone else to task. I don't have answers, I have questions. Those questions are embodied in the thoughts above.
Posted by Brian Reeder at 11:37 PM