In the first part of this series, we looked at Ron Reimer’s breeding toward rust resistance in his daylilies. In this second part, we will look at Ron’s pursuit of his ideal flower type on a superior plant. 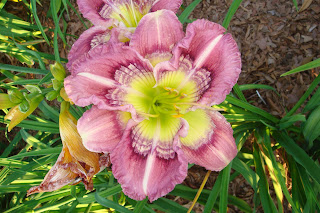 To begin with, I will summarize my understanding of what Ron is pursuing in flower and plant.

In the flower, Ron is breeding for large flowers (6”+) that have very heavy texture, full petals and that open to a wide and flat form, creating a round effect. He wants clean, clear, fully saturated colors that will hold in full sun in the extreme heat of his summer conditions. In recent years, he has added patterns to this list of flower traits.

In the plant, he is breeding for hardy plants with dormant foliage, (with semi-evergreen also being considered acceptable in some instances). The foliage must be a nice green color and hold up well through the growing season with no deterioration or foliage problems. The plant should multiply well, but not so quickly as to “go to grass” and decrease flower production or require frequent division to remain in full flower production. The scapes should be around three feet tall and display the large flowers at a good angle for viewing. The scapes must be strong enough to hold up many flowers and not fall over or be so weak as to be torn down in strong winds. There should be well spaced, multiple branching and many buds so as to give a long display of color in the garden. Rebloom is an added bonus, where possible. Finally, the plant should show high resistance to diseases (especially rust and crown rot) and not be susceptible to insects, thus maintaining a nice plant in the garden through the growing season, in addition to a lovely and durable flower. 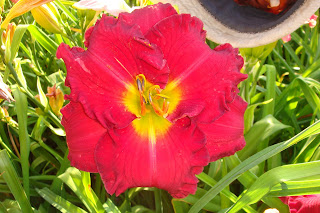 Wonderful 2012 seedling, self red with very round form and great substance

As I mentioned in my previous article about Mr. Reimer, I have had the opportunity to exchange multiple emails with Ron and to ask him many questions about his breeding practices and the vision he is pursuing in his phenotype breeding. I can tell you that I am impressed both with his foresight in pursuing very specific phenotype traits and with his patience in taking as long as necessary to reach those goals. For this article, I will mainly rely on Ron’s own words to give you a view into his process and the outcome he is pursuing.

First, let us look again at a little of the background of Ron’s current work.

"My collection of named cultivars, which I no longer use, was all sold as a collection in 2003. After purchasing many named cultivars over the years that performed poorly or didn't resemble their catalog photo, I began a long period of line breeding. When I moved to my current location in 2005, I had no named cultivars left, only 120 line-bred seedlings. In 2007, I purchased four named cultivars which I crossed my seedlings with for two seasons (LAVENDER BLUE BABY, PURPLE EYED FANTASY, PEPPERMINT DELIGHT, AND BRITTANY DANIELLE).  I did not see improvements in my seedlings from these cultivars; they had serious defects and so were discarded.  I did not use any purchased named cultivars (other than those four) until 2009, when photos of patterned daylilies caught my eye and I invested in some patterned cultivars. I have continued to purchase a few named cultivars yearly since then, always just for the patterns. (And, I continue to remove them from the hybridizing program when they show intolerable defects.)”

One of the most important points that I have noted from the background of Ron’s current work is that he moved strictly to his own seedlings in 2003, working with that stock for several generations before bringing in any new stock. This gave him time to create a line reflective of his vision, and now, when crossing other hybridizer’s work into his lines, he can easily go back to his desired traits, not losing his hard-earned work. 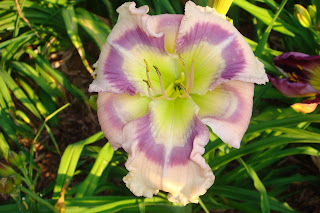 Now we will look at some of Ron’s own words about the phenotype traits he has pursued in breeding. First, some words about the flower phenotype he has pursued, “My goal has been to develop very large, wide-segmented, heavy-textured, flat-opening and flat-formed flowers. All colors of flowers must perform in our hellish summer climate and still look good at 8:00 p.m. Most of my flowers are in the 6 - 8" range, are mostly very full, flat, and sun-resistant. They are heavy-textured with good plant health and habits.”

On his preference for scapes in the three-foot range, Ron says, “From my own perspective, I like to see the flowers close up, being able to touch and smell them so, a 3-foot height is most convenient. When a large flower is angled for easy viewing and tall enough for close-up viewing, I always say, "I love the way it stands up and looks at you!" I like large flowers, and a large 8-inch flower on an 18" tall plant looks very much out of proportion; such a flower on a 36" scape has a far more attractive presentation. I am aiming for a WOW factor here. A tall daylily plant with huge glowing flowers has that WOW factor as few other garden plants have. Taller daylilies can be planted midway to the back of the flowerbed, put on their show, and when they are out of bloom, can be out of the main visual focus. As a landscape designer and contractor, I have been trained to see it this way.” 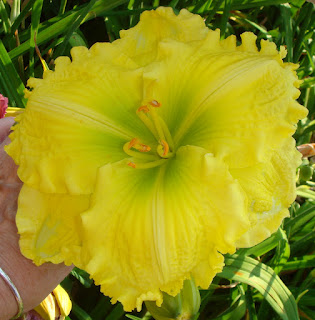 A 2012 self yellow seedling with very green throat showing the ideal round, flat form Ron is striving for

Ron says that the challenges of the project he has set out for himself are many, but by having developed a line of his own that he knows intimately, he is finding it much easier to bring in new traits to complete the patterning of his flowers.

“Trying to get high rust resistance, dormancy, and great, clear, sunfast colors, along with great plant traits, is tough, and now I have added patterns to that set, so my job is now even worse. The primary direction I want to develop now is to put patterns on some of my heavy-textured, rust resistant, sun-resistant large flowered cultivars. The first generation of patterns, this spring, was amazingly good for a first year, and some of these were also good performers in the heat and sun.”

“The first "patterned generation" from my 2009 outcrosses, which bloomed this year, have good patterns and are showing 80% dormancy to semi-evergreen traits. This is exciting to me for a first generation of outcrosses. To get away with so few evergreens at this stage really makes me happy. Along with the dormancy/semi-evergreen status, about 2/3 of them show good (HR to RR) rust resistance. I am surprised to have such a small percentage of the problematic traits. Many selects also showed good sun resistance and generally good flower qualities.” Another point that I find very admirable is that, in spite of these F1 crosses producing so many nice and high quality plants, Ron is not rushing to make introductions from those and feels he will need to backcross them into his own lines to set the fine traits he has established there and make the finished phenotype he is pursuing. While I am impatient for Ron to make some introductions, it is lucky for us all that he is not and will continue pursuing his vision until such a time as he feel it has been fulfilled.

In regards to what Ron hopes to introduce, I believe his own words are most valuable in understanding his overarching goal. “I have said in the past that I would like these flowers to provide pleasure on a lasting basis, like some old camellias and roses do these days, rather than having the plants end up in the compost heap because the problems have not been bred out of the plants. In order to achieve this status, the plants really need to be nearly perfect to qualify as improved.” This type of vision can’t be rushed, and this Ron understands well.

In one conversation, having seen some pictures of some of his seedlings I felt could easily breed a nice strain of unusual forms with rust resistance, Ron explained why he has not focused on that direction, saying, “I have focused my attention on a narrow category of daylilies, just the large flat formed dips. There are enough challenges in one narrow range of flowers (i.e., achieving disease resistance, etc.) so you don't need more variables than you can handle.” While I am a generalist and work with many forms, heights and both dips and tets, it is this focus that will give Ron the ability to reach his very specific goal. 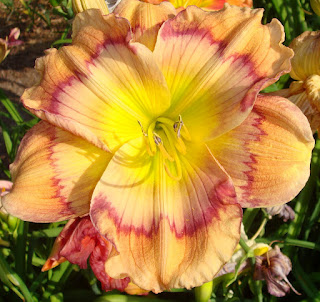 I have often told Ron that I feel he should introduce some of his very rust resistant older seedlings. Several of them, I feel, are as advanced (or more so) as anything currently available and could be very useful in a wide range of different breeding projects that wish to incorporate rust resistance, but Ron even has a very distinct goal as to what he wants in his first collection of finished cultivars. He says, “When I was hybridizing orchids, I saw a hybridizer introduce a perfected and much improved line of cymbidium orchids in one release; I was impressed with the simple and complete product of one line that had it all, and I have taken that goal for the release of my daylily line.” I look forward to that release with much anticipation. However, for those of us who are worried that some of Ron’s older seedlings with long-term and high rust resistance, as well as marvelous flowers, will never make it into commerce, he has suggested that once he has introduced his initial collection, he may introduce some of the very best of his older seedlings. It might be useful for anyone who is enamored of any of these seedlings to let Ron know what he or she finds particularly desirable and extraordinary from his pre-2009 efforts. Many of Ron’s seedlings, pre-2009 and post-2009, can be viewed at his Picasa web album.

It may seem as though Ron has taken a long time in getting to his goals, and for those of us waiting to acquire some of Ron’s finished products, the waiting yet may seem almost intolerable, but Ron offered me these words of wisdom. “The biggest threat to the development of a healthy daylily line seems to be lack of time spent in evaluation. I am very familiar with the University of Arkansas Fruit Substation (located about 25 miles from here) where the staff hybridizes for disease resistant grapes, peaches, etc. Considering the way the professionals there approach hybridizing, I see a great contrast with the daylily breeders who can't get the new intros out the door fast enough. The time spent in evaluation is so important to assess what diseases or problems will show up in a possible future introduction.” Finally, when I asked Ron what he hoped his legacy with daylilies would be, he had this to say, “I would like the few introductions that I finally do come up with to have lasting power, to have value that could continue to make them popular for decades - and not to be thrown away because they are poor performers in the garden.” To me, that would definitely be a legacy to strive toward.

To read the first part of this series, please click here.