A Great Source for Great Plants

This is not a paid advertisement, though it may sound like one, lol.

It is not usually my style to rave about a seller, but I have to in regards to Bob Selman of Blue Ridge Daylilies. Now, I have to state that Bob is a friend of mine, but I have other friends who sell plants and I am not raving about their plants because I am just not as amazed by the plants they send, as I am with Bob's stock, even though some of them offer nice stock.

First, the divisions Bob sends are very large, with each fan being large and superbly grown. They are as large as any of the giant fans you see coming from southern growers, but Bob is not in the south. Bob is growing his plants in Alexander, North Carolina, which is in zone 6 but is at 2,560 feet elevation above sea level, so it is colder than typical zone six areas and has much later cold into the spring. This all combines to make the size of the fans Bob ships more amazing and makes the claims of many that the fans they ship are small because "they aren't in the south" seem a bit dubious...

Bob has a huge collection of cultivars, both diploid and tetraploid, as well as his own introductions. One important point is that Bob disposes of cultivars that perform poorly in his area. He makes an effort to only sell the cultivars that perform well in his own garden, doesn't use greenhouses or BAP and relies on simple good soil and good care to produce a top quality product.

Finally, I wanted to mention a bit about Bob's own hybridizing program and his introductions. Bob has many beautiful introductions. I am sorry to say that I have not yet grown a great many of them in my own garden, but I have studied his introductions closely and have discussed them at length with Bob on several occasions. One of the most important points about Bob's work, and one that he stresses repeatedly, is that his introductions are all bred and raised in his own garden with no use of greenhouses, shade cloth or elaborate feeding systems.

Bob's focus in his own hybridizing program is generally on dormant cultivars with scapes of 30" or more and with flowers that open well and hold up well, of good substance and modern form. He also focuses on great branching and high bud counts. To me, one of the most important aspects of Bob's cultivars is that while they may have faces similar to some of the more popular southern cultivars, they are dormant plants that actually produce the numbers of branches and buds they are registered with when grown in zones lower than zone 8. As well, due to Bob's high altitude and unpredictable and erratic spring weather, his cultivars are well tested for late freezes and should do well in at least zone 5. There should be some of his dormants that will flourish in zones 4 or less. I am hoping to visit Bob this summer to view his cultivars and I plan to do a more extensive interview with him then for a longer blog posting on his hybridizing program. I also plan to select some of his cultivars to try out in my own program at that time. A few of my favorite introductions from Bob follow. 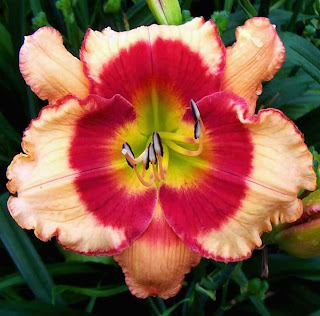 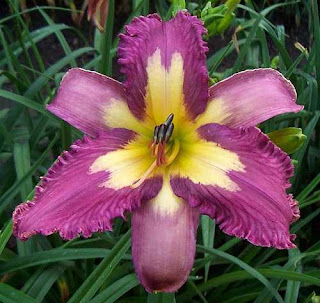 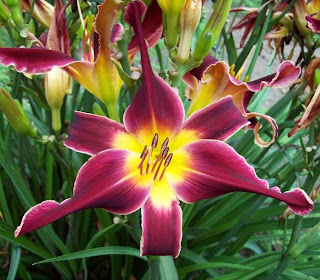 For anyone interested in purchasing daylily cultivars from Bob, his own introductions or other breeder's introductions, there are three ways to purchase.

Second, you can find his offerings at the Blooming Auction here.

Third, you can also find his offerings at the Lily Auction here.

I hope you will try some plants from Bob and experience the amazingly nice divisions he offers and if you are looking for modern faces on dormant plants with great plant traits, I hope you will give his own introductions some consideration. I think Bob's introductions should be much more widely known, and due to the quality of the divisions he sends of other breeder's cultivars, he should be one of the countries top sellers.
Posted by Brian Reeder at 6:40 PM