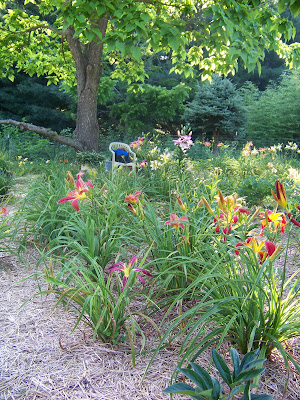 During the early part of April, I spent several days planting out seedlings before new daylily divisions started arriving to take up all my time. As I was planting those seedlings, it gave me some time to just think about where I was in my program.

I am now three years into evaluating as breeders the cultivars that I either had when I started breeding or purchased in that first year. I have now seen three years worth of seedlings grow and have flowered many individuals from the first year and will see more from the first year and some from the second bloom this coming summer. I have also gone through one season of rust (last late summer/fall) so I am beginning to get some very good data on the cultivars I started out with and those I had been adding along the way, up until last summer.

Of course, those cultivars I added last year in summer or fall have not been bred from, nor were many I planted last spring, as the drought was so severe I cut the scapes out of many new plantings to help them get established. Those planted last spring were evaluated for rust though. So none of these cultivars have been evaluated for seed setting ability, nor on the germination of their seeds or the growth of their seedlings, but on those from two years ago or more, I am now getting pretty good idea of which cultivars I will move forward with as centerpieces of my breeding program.

I use a lot of criteria in determining which cultivars are really worth the time and effort to breed from. I evaluate many points and the flower is one of the last points considered. For the most part, however, since information about anything other than the flower as well as pictures of the plant are so hard to find, like everyone else, I am basically buying based on the flower, except where I have been able to gather data beyond that one point. It is very interesting to me how things that I thought would be central to my efforts have fallen by the wayside or been completely removed from consideration, while things I would have considered ho-hum starting out have become central to my goals. In the same way that you can't tell much about a book by its cover, you can't tell much about a daylily plant by looking at its flower.

While planting those seedlings this spring, I thought a great deal about just how important strong, vigorous seedlings are to me. There have been a few very expensive cultivars that I have worked with that throw awful, weak seedlings. I won't be bothering with seeds from them anymore, though I might try them as pollen parents, though very carefully. My ideal mating is a pair that are strongly fertile both ways and both throw strong, vigorous seedlings. If I mate such a strong plant with a plant I know shows lower fertility and/or poor seedling vigor, I consider that a "salvage" project and I will want to breed the F1 together to see if the weakness of the lesser parent is going to show up again strongly in the offspring or the second generation. Generally, for me the offspring of "salvage matings" are a bridge generation to see if improvements can be made to the lesser traits of the poorer parent while retaining some of the desirable phenotype traits.

Already, I have eliminated a good number of the cultivars I began with, but the encouraging thing is that I am beginning to recognize those cultivars that will be very prominent to my work. In some instances, I now know a few of my major "mother plants" in both Dip and Tet, both because they produce lots of seeds, but also because their seeds germinate well and the seedlings are vigorous. I am also beginning to identify certain major pollen parents, not because these major pollen parents aren't good pod parents as well - they tend to be - but because they have a special trait or set of traits that I want to spread across a wide range of phenotypes to evaluate.

One technique I am beginning to really like is to use one major pollen parent throughout the season on specific pod parents. This certainly makes pedigrees easier, as I only need to notate in my records which pollen parent goes with which pod parent for the whole year and then I don't have to deal with frustrating and messy tags hanging all over the scapes. I guess that means I am a long cross kinda guy. Of course, this is not news to me, as I always preferred to work with long crosses in any breeding work I have done in the past. My experience is that long crosses allow the majority of the hidden genes - both good and bad - to be revealed.

Another technique I am using and really becoming fond of is that when I identify a pod parent I want to work with heavily, I multiple the plant (or purchase multiple divisions) to establish multiple clumps and then use each clump with a different pollen parent, using that specific pollen parent on the individual clump all season. Again, this makes record keeping much easier. This would be more difficult to accomplish with a newer and expensive cultivar, but when working with older and more easily obtainable cultivars as "brood mares", this is a very handy technique.

For example, one older diploid cultivar that I have had for over thirty years also happens to be one of my favorite pod parents for many reasons. By chance, I have had huge amounts of this cultivar for decades and when I replanted it to make breeding clumps, I ended up with 65 clumps each of ten to thirty fans. To say the least, this will become a major mother in my diploid lines and I can use up to 65 pollen parents on it in any given year while not having to hang tags. All I need to do is number each clump and notate the pollen parent to be used for each clump.

As I store pollen in the freezer and gather pollen fresh during the breeding season, it is not hard to ensure enough pollen (and at the right time) to make sure that there is enough pollen of each selected pollen parent for the given season. These techniques might not work for everyone, but for me, this is a great setup, as it allows not only long crosses, but super-long crosses. In this way, I can be sure to extract the entire range of genes from such a pod parent, and by combining it with a huge number of pollen parents, the chances are very good that I can observe the entire range of genes hidden in the pod parent.

In time, I may begin to use more short crosses, especially as I begin to breed from my seedlings, but for now I really like the work with long crosses. At this stage, I am building a foundation for strains, so the long crosses allow me to fully evaluate those individual cultivars that may become the foundation of my future strains. It is exciting to be at the stage now where I can see this process beginning to congeal.
Posted by Brian Reeder at 4:08 PM