Musings On The Year So Far....

2013 Is Shaping Up To Be Interesting 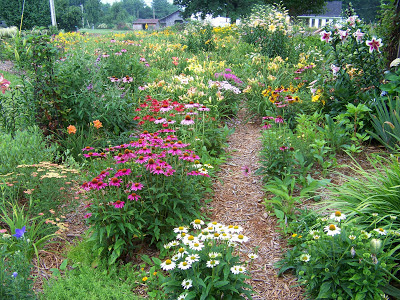 I spent most of the day in the garden today (06-19-2013) and was thinking about how late all the daylilies are this year. Compared to last year and the last three years, all my daylilies are blooming a month late. The same was true for the peonies and the irises as well. This was the first year in a decade (or more) that there were peonies in bloom on my birthday in the end of May. When I was a child, that was the norm, but since the mid-90's or so, the season has been getting earlier and earlier, to the point that the peonies were peaking in late April, along with the bearded and Siberian irises, and it was the early/early-mid daylilies blooming on my birthday. It was nice to smell a big, fragrant lactiflora hybrid peony on my birthday, and did that ever take me back to my childhood!

I don't mind things being later (or what was once normal) this season. It has given me time to actually get a lot of breeding done with the peonies, bearded, Siberian and Louisiana irises, and then still have a little break before the daylilies really got going. The first daylily flowers were in the end of May this year and the early-early types didn't really get going until the first to second week of June. I am only now beginning to breed daylilies in earnest, but many things haven't even started opening yet and there are still many later types that don't even have visible scapes yet. It will be exciting to actually have the late daylilies be late this year.

However, one thing I realized today is that my usual seed starting system may not pan out this year. Generally, I like to start the year's seeds in August after they have been harvested and chilled for a week or two. I don't see how that can possibly work out this year, as I suspect the pods will go a month or more later than normal, pushing them up into September and possibly later, which will be too late for planting before cold weather for my comfort. Then I realized that is fine. In fact, if there is one rule I follow when working with plants or animals, it is to expect the unexpected and be flexible enough to roll with whatever comes along. So I realized that this will give me a chance to get the new seedling bed I am preparing finished and I can then focus on moving select seedlings into that bed in August through November, and I won't have to worry about seed starting at all this fall. I can just start those seeds next spring and in fact, it may be a blessing, as I can take my time with the select seedlings this fall, and then revamp the beds they were in and plant the seeds in those in the spring. Since I will have lots of peony and iris seeds to deal with this year, this is probably a huge blessing, and I do think it is important to look for blessings when our plans get turned upside down by fate (or whatever you want to call it).

I am practicing a much more focused and narrow system of crossing this year. Since I have been working with many plants for the last few years, I now have enough gathered experience to be much more focused. This is allowing me to both produce less seed this year and to pedigree many of those crosses much more closely. I may return to a more shotgun approach with tons of seeds next year, but this year for me is about details, not broad strokes.

Another factor is that over the last few years, I have amassed a huge amount of seedlings, and I am now putting a lot of focus on making selections. Now these are not selections aimed so much at introductions (though some might become that in time), but rather to focus on bridge plants from my various crosses that display traits I want to continue forward with. I have to say that I am rather surprised by the numbers of decent seedlings that I am flowering this year. No, they aren't groundbreaking. The daylily world will not give a collective shudder over any of them, but I am seeing the minutia that I expected and hoped for, the combinations of traits from the crosses I have made that I had hoped to see. I am seeing some recessive genes emerging that give me even greater hope for future projects. I am even seeing an occasional seedling that really does take my berth away. That really makes it easy to get out there every day and go at it. I think before I produce another huge crop of seeds, I really need to get this crop of seedlings evaluated, culled through and moved into the new bed, which is larger than where they are now and will give the select seedlings room to develop and show me what they can really do as they reach full clump-strength.

Since I work with a number of plant species including herbaceous and tree peonies, irises of several types, hellebores, magnolias, amaryllis, and hosta, in addition to daylilies, I have some experience with pollinating and raising a wide range of plant species. I have to say that the daylilies are the easiest by far of them all to pollinate and hybridize. They are also one of the very easiest to raise from seed, being very forgiving of mistreatment and less time sensitive than some of the other things. The magnolias, peonies and iris are more difficult to pollinate and often much more difficult to ensure that they have not self-pollinated. It doesn't surprise me that daylilies are so popular and hybridized by a large number of people. They are pretty easy and they are fun too.

One odd thing I have noticed this year is that there have been quite a few misshaped flowers on some of the earliest types. While it is true that we did have a light frost in the second week of May, I am surprised by the damage that seemed to have did. Last year, we had a major frost in the last week of April that froze many daylilies to the ground, and yet, while the scapes were often very short and some flowers were misshaped, it seem this light frost has produced more misshaped flowers, especially amongst the UF/Spider groups, and especially in the dips. Daylilies are very influenced by external conditions and seem to vary considerably, in many cases, from year to year, but what really stands out to me are those that have been consistent from year to year. I suspect that those very consistent plants may be real gems. Now it will be interesting to see if they can reproduce consistency of performance in their offspring. Fingers firmly crossed!