Just wanted to make a short update to show everyone the new seedling shelves I just got set up. I haven't started any seeds yet, which is fairly late for me. I have usually started some of some kind by November, but this year I have just taken a rest. I'll probably get started with some germinating in the next week or two.

There are four sets of these shelves. I got them on sale at Lowes back in December. The four shelves were just over two hundred dollars. Two of the sets are on an eastern wall with no windows (but a lovely mural I did myself). The two lower shelves on these sets are for storage of supplies, while the two upper shelves are for seed drying during gathering season, soaking seeds for germination and can be used for seedlings if there is so many that the other two sets of shelves can't handle them all (which I am hoping won't happen, but I expect will :-) These shelve sets technically have five shelves, but I am using the top shelf to set the lights on for the shelf below. The two sets of shelves on the east wall get direct light for several hours a day, but not as much as the other two sets get, so I am using just a few more lamps on these sets. 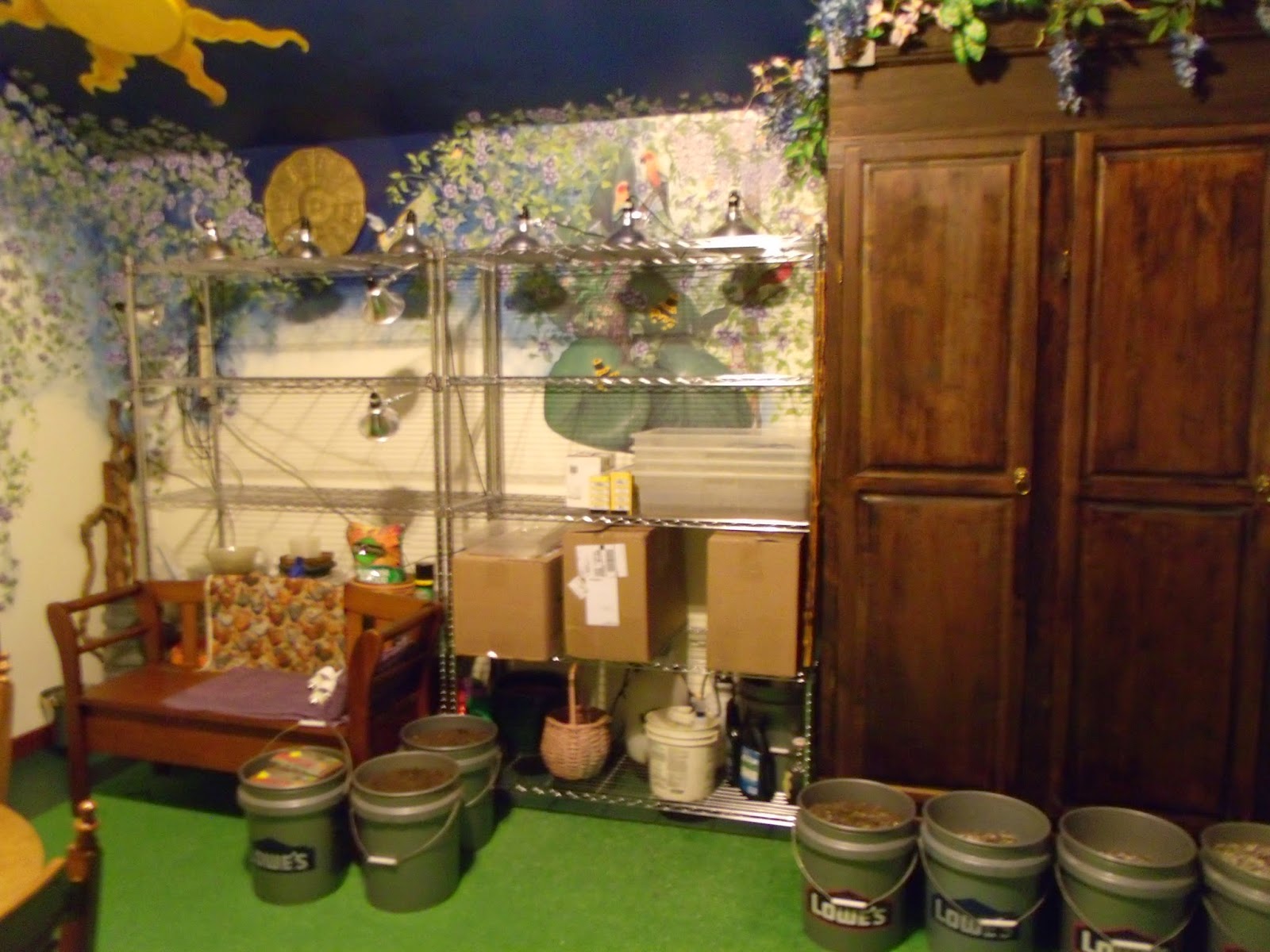 The other two sets of shelves are on the south wall and are in front of long (nearly floor to ceiling) southern windows. These two shelf sets get full sun all day (when the blinds are opened), so I don't have to use a lot of lights on this set. I may not even use all the lights that are allocated for these two sets. 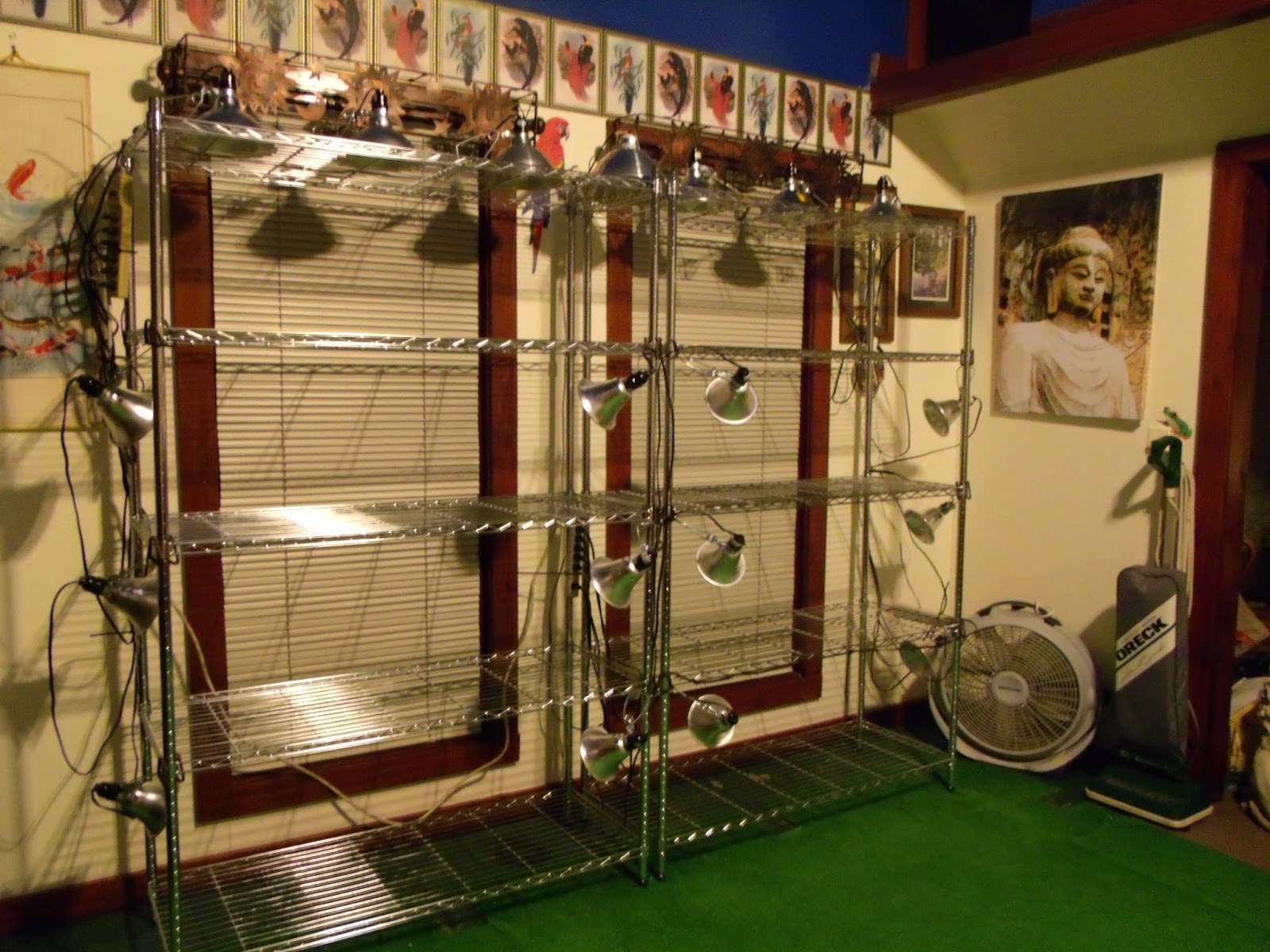 The lights that I am using are clamp lamps with compact fluorescent screw-in bulbs, the 100-watt equivalent, though I do use a few incandescent bulbs of 75-watts in the lamps I use over trays where I am germinating hosta seeds to raise the temperature a bit (I have allocated two flats/trays - each holding 18 3 1/2" pots - for hosta seeds this year. I did about 5,000 hosta seeds last year, so I thought I would just do about 500 this year and take a bit of a break). I already had all the clamp lamps, as I have been using them for seed growing now for several years. I hate using those four foot long fluorescent tubes and thought I would give these smaller bulbs a try and they have worked very well.

In regards to the lamps, I would mention that I am not trying to create greenhouse or outdoors/full sunlight conditions. my goal is not to grow the seedlings at maximum growth or to fast-grow them for quicker first flower. My goal is simply to germinate them and keep them alive until they can go outside. "Why", you may ask. Well, seeds I start indoors are things that I have had trouble growing outside, that I have in small numbers or things that are very rare or very important. However, I am not looking to speed grow them. As with all other seed growing I do, I am looking for those that can take some abuse and still flourish, so I don't go out of my way to pump up the humidity or slather them down in fertilizers. Nor do I spend a king's ransom to operate a lot of costly lighting. Why should I, when the sun shines through those windows   and deep into the room? I will also let you in on a little secret. The plants grown in front of these windows flourish and often do bloom when quite young, even without a lot of artificial lighting.

Each shelf will hold four standard sized flats. I use the ones that don't have any drainage holes. Each flat holds 18 3 1/2" pots. The two shelf units in front of the windows will hold 32 flats, and the top two shelves on the other units can hold half that many. I am hoping not to exceed the 32 flats, but I wouldn't bet on it. We will see. I have 50 flats and 900 3 1/2" pots, just in case.

For me, seed growing is an ongoing experiment. I'll let you all know how the new shelves work out. Wish me luck!
Posted by Brian Reeder at 2:35 PM