Sorting the Signal From the Noise

Sorting the Signal From the Noise

It is a commonly heard phrase. It means determining what is important or relevant within any group of items or information. It feels like I have been immersed in this process for the last several years, and this year is a major culmination of that process. Over the years, it has meant different things to me at different times.

At one time it simply meant finding daylilies that I liked out of all those that were available, later it meant finding those that did the best in my garden, then it changed to those that could be relied upon as breeders, and then it became those with recurrent rust resistance. Now, seven years into my breeding program and over forty years of growing daylilies, it means determining what I will move forward with in that breeding program: in other words, what excites me and brings me the most joy. 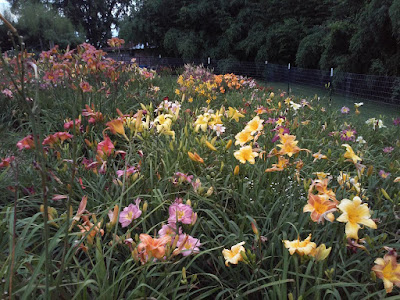 For anyone who has been following my blog, you know that I have been working through a process of plant selection, considering many plant traits through test mating to observe breeding value for target traits and that has included a five-year rust resistance screening program that concluded last year (2016). I have now found myself at the point where I have to wade into the many, many plants - cultivars and seedlings - that have come through those years of plant trait screening to determine what I value most: to determine the signal out of the noise of all those many possible directions.

And there are so many possibilities. I chose not to focus on a particular color or form during the five year rust resistance screening, as the goal was to find those with the most consistent and highest rust resistance that could reliably reproduce, and reliably reproduce the apparent resistance (breeding value). I didn't focus on one or the other ploidy level. I now find myself with a huge number of possible directions. Thus one of the major goals of the last couple of years is to figure out what "signal" means to me. 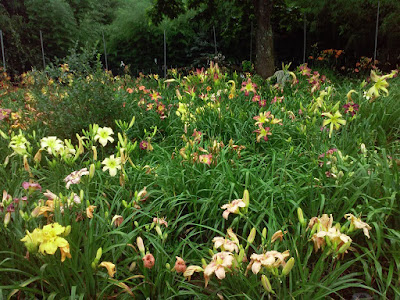 If you follow this blog, you may have seen my posts from 2016 on the origins of the daylily (What is a Daylily) and the various forms and colors of daylilies (The Daylily as Art), but you may not realize that I wrote those series of posts to help me focus my program, by outlining where it all came from and what is there within the daylily genome to play with. Writing those series of posts did help. It reminded me what I originally was interested in, where those traits (may) derive from and what I like the best now after several years of working with many forms and colors at both ploidy levels.

So I am starting to understand what the "signal" is for me. However, that doesn't mean that my signal should be your signal. My signal is specific to me. It is what makes me feel joyous and gets me out of bed in the morning and out into the field, even on days when I don't feel like it. My 'signal' is those things I want to work on, but your signal may be completely different, and that it good. There are so many signals available in the daylily to explore!

My signal is more focused on tetraploids, though there are some diploid lines I can't give up. They too are part of my "signal". What I have tried to do is only have diploids in my overall program that represent traits I don't have, or that don't currently exist, at the tetraploid level. However, I have gone out of my way to find examples of any trait I really like at the tet level, but there are some things that are just better in the dips, to me, and that is where my focus at the dip level will continue (until there is something as good or better at the tet level...). 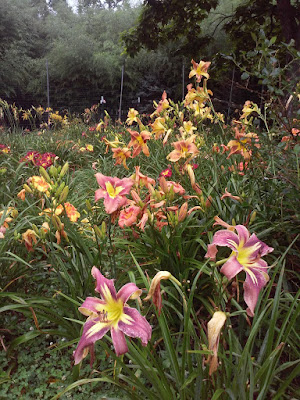 One irony with this is that there are many, many more diploids with good to very high rust resistance than there are tetraploids, so I have had very good success in producing a large number of apparently rust resistant seedlings at the diploid level. However through much persistence, I have more than enough apparently rust resistant cultivars and seedlings at the tet level. So I am going to be eliminating many diploid seedlings this year that have shown very good resistance. I don't feel right to just compost those without offering them to the daylily community, for those who are interested in rust resistance at the diploid level. To that end, I will be offering these in box lots this fall in order to spread the results of my screening program out to anyone interested in them, but this is the last year I will grow the vast majority of these, one way or the other. For more on that seedling sale, click here for details. I will begin posting pictures of diploid seedlings at my Facebook page soon, so follow my page to see the pictures.

One major effort to separate signal from noise is that I have collected together many good, older cultivars that have garden value, many have good rust resistance and breeding value for resistance and other traits, while others don't have as much breeding value but are nice plants for the garden and/or are quite popular. In observing my program for the last few years, it becomes increasingly apparent that I want to maintain my gardens at their current size and not increase the amount of garden space I have to weed, or even begin to downsize to some extent. To that end, I have decided to disperse a large number of clumps of older cultivars by other hybridizers. For a list of those, click here. This is a great opportunity for anyone interested in 'instant clumps', who wants to start a daylily business, or for landscapers or nurseries that want to add well-tested garden plants to their offered stock.

By decreasing the number of cultivars I grow that I am no longer breeding from, keeping my own sale-offerings of cultivars by other hybridizers to a minimum and eliminating many lines of breeding that aren't central to my interest, I can get rid of much of the noise and have my garden be focused on the signal(s) that interests me most. By making these changes, I can eliminate distractions and give all my attention and effort to those things that make me the most excited.

I look forward to beginning a new phase of writing here at this blog about the 'signal' in the near future. As I get this transitional phase finished, the blog will turn its attention to the new phase of focus. I am excited about it! I have much I look forward to writing about and sharing with you here. 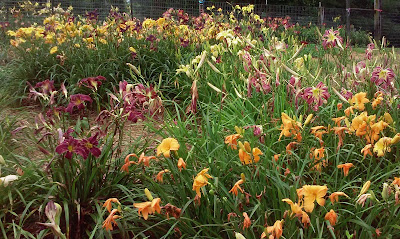