Just Taking it In...

As the summer begins to wane and fall approaches, the daylilies give that final big pulse of green, sending up a new round of growth. I always love this time of year. It reminds me of the promise of new growth and a new bloom season to come at the next arrival of spring and summer...the cycle ever rolling onward. 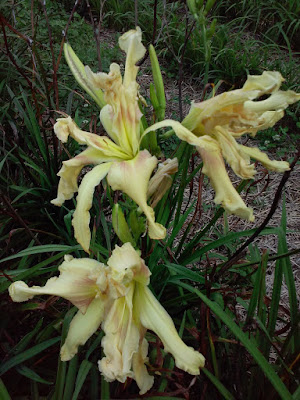 Seeds are nearly gathered from a very fertile season. Rain, heavy and frequent, made pod set easy, but some seeds also rotted if not gathered promptly. A season of bounty gave the ability to create a huge number of interesting crosses, but at the same time I managed to make fewer seeds than I have since 2011, the first year with a serious attempt a a program-level seed production. Progress, that seems! 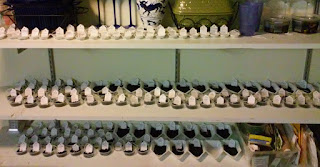 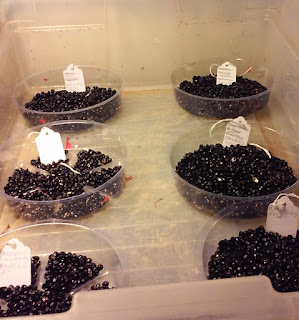 The soil is moist, temperatures warm but comfortable and so moving plants is easy and productive. With no rust at all this year, I am able to move things between all the gardens on the farm. The heat has been reduced from the summer blend of high heat and high humidity. The main season, covering June and July-August, early and mid through late, gave rise to two separate appearances. 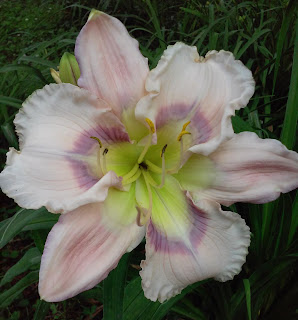 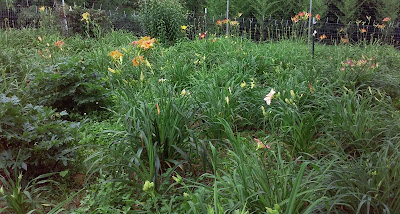 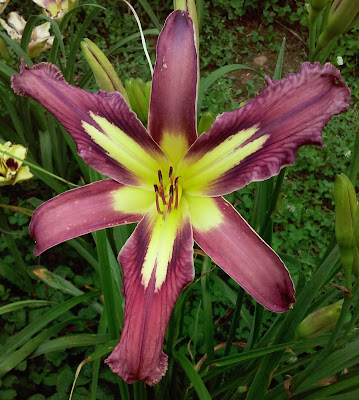 In the first half, the early season, the plants' battle with the flower predators tiny - bugs! - was greatly reduced due to lots of rain. In the second half, they battled flower predators large - deer! Proper boundaries is the key to all of these. Selection or spray the answer to the first when heat and drought make them plentiful. The only answer I have found permanently for the second is fencing or dogs. 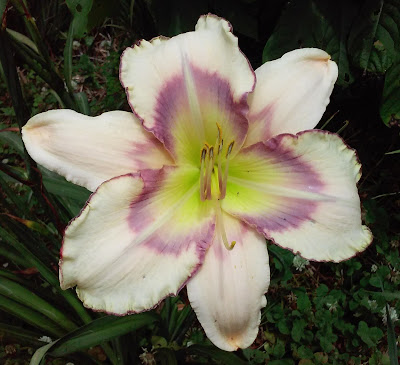 In June, the early part of the season, temperatures were cooler so many flowers are effected in some way or another. Some curling, weird sepals, some spotty from thrips even though thrips were few. Others muddy, edges tiny and not really covered in bumps. 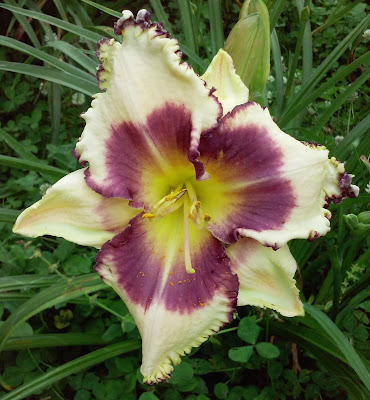 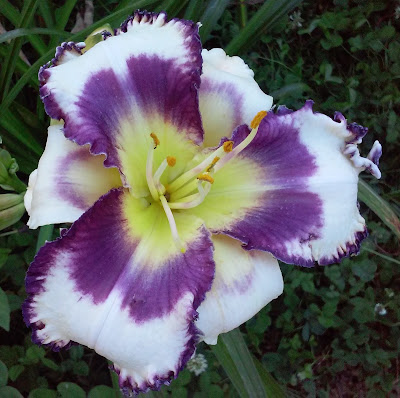 You look for those without problems and cross them everywhere, not just on a few. Who has no enations from thrips? Who has sepals opened out wide? Who has colors, rich and clean? Who has foliage unburnt and yellowed from late frost? The answers provide the outline of forward movement in building early flowered strains. 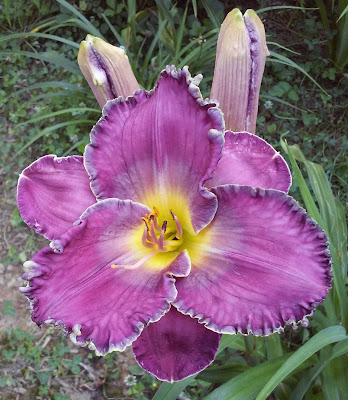 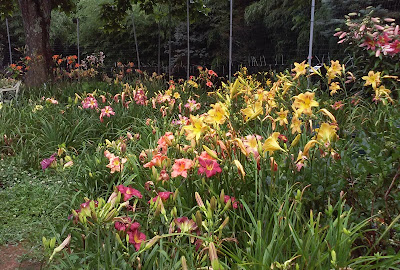 In July on through summer, the season balmy, hot and wet. Flowers gorgeous and artistry prevails. Still remember, what was superior before the heat-threshold was crossed at the beginning of July? It is easy to forget and forgive when edges bubble, eyes are popping, teeth are flashing and even wide edges open. A record or two can jog the hypnotic spell. Keeping discipline in the face of such beauty is hard, hard, hard! 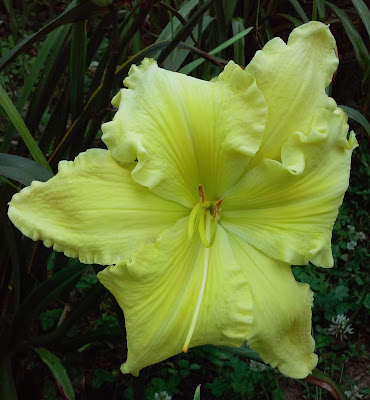 The temptation is great to go crazy, just breeding flower for flower, pretty x pretty, as one wants to do, but what had nice foliage that emerged late and didn't frost-burn? What shows no enations, no spotting and no rot or rust in many past years? What is beautifully open even after cold nights? What has edges not hanging and opening right? Without boundaries, all can go awry. 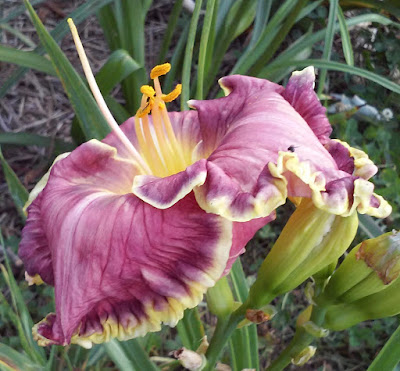 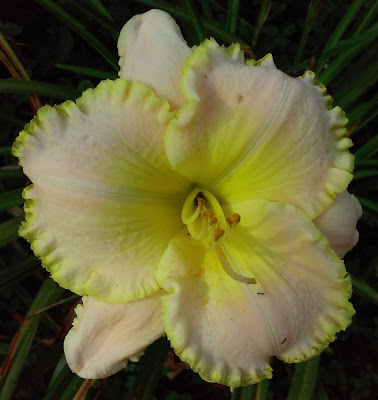 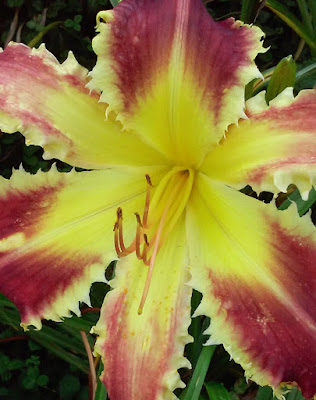 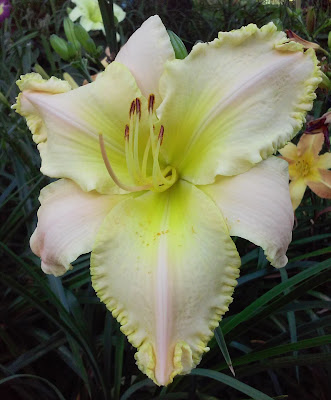 Now the seeds maturing and nearly gathered, the cooler nights begin. New growth emerging and bursting; green, fresh and bright! Pulsing green with new growth and new life, rebloomers giving a new flush of flowers glowing like stars and fairies in the low mid-point light. The promise of next year is implicit in this end. Plotting and planning, what selections, how many new slots to plant? Lots of keepers in the seed bed! Will there be space for seeds? The winnowing begins as it does every fall. Harvest and reduction the raison d'etre for the season. 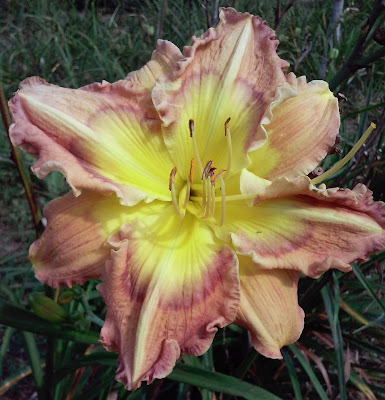 Time to pause and look at the light. Autumn calling in the slanting sunlight. Slanting sunlight shining through the flowers of rebloom, a promise of the full glory of the garden to come again. Breathe deep and smell autumn on the breeze. Feel it in the cool earth. Soon all will be sleeping and dreaming through the cold winter's nights, while planning next year, full of promise, of green throats and green growth, deep into those cold nights! But for now, the new leaves come again, from the earth, from the crown, to give that final burst of growth, green and bright, into the waning of the light. Falling toward midwinter, giving strength for the new growth of spring to come, when pulsing green again, the garden comes to life. 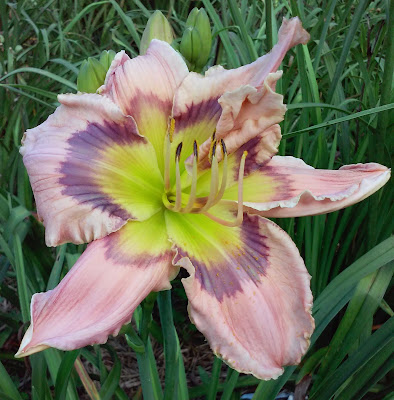 A promising future...
The green pulse is bright and lasting in this one!
Photo from after 8:00 pm on a 90+ degree F. day in full sun.