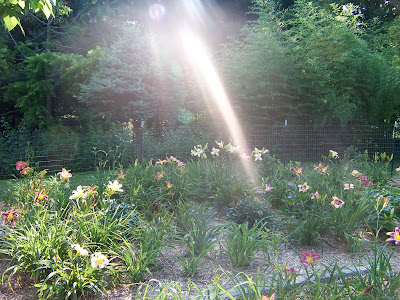 Brian Reeder hails from southeastern Kentucky high on the Cumberland Plateau (zone 6/7, region 10) where he was born and raised. He has grown daylilies and many other plants since early childhood, nearly forty years. He has also worked extensively with many species of animals, specifically poultry, for over three decades. While not a professional geneticist, he has studied genetics and breeding techniques in all the species he has worked with as well as hybridization of related species and is the author of two books on poultry phenotype genetics that are aimed toward hobbyist interests.

Brian's interest in daylilies began in early childhood with H. fulva 'Europa', which grew in his grandmother's garden. He obtained his first cultivar, 'Winnie The Pooh', from the Gilbert H. Wild catalog when he was six years old, in an order his aunt placed for garden plants. From there, he began collecting cultivars and did so obsessively through his teens. During his twenties and thirties, his focus was on his poultry research, which left little time for gardening, but he still maintained many daylilies, occasionally added a few cultivars and thought a great deal about what makes a good cultivar and what he would like to hybridize if he had the time. When his poultry research began to wind down in 2007-2008, he was ready to turn back to his daylilies, and finally begin hybridizing in 2010, applying his extensive experience of breeding, hybridization, selection and genetics to his work with daylily cultivars. With daylilies, as with all the organisms he has bred and studied, his focus is vigor, hardiness, fertility and ease of maintenance, along with beautiful visual traits. He has been heard to say, "It is my observation from many years of collecting and observing daylily cultivars that too many people these days seem to only be breeding daylily flowers, while too few seem to be breeding daylily plants."

My Background in Breeding for Disease Resistance

I would like to present some of my background for those who do not know me and have not heard about my work in selection and breeding for disease resistance over the last two decades.

It is important to state first and foremost that I am not a professional genetic researcher affiliated with any university or industry. I am an independent researcher and breeder, but I have worked with several professional researchers over the last two decades in my research and the practical application of my finding through breeding and selection.

My road to working with immuno-genetics (the study of genetic, heritable disease resistance) started early due to the fact that every group of animals or plants I worked with from childhood was beset by some plague or another. For many years, through my childhood and into my early twenties, I followed the standard prescription of ‘medicate, and then medicate some more’. Over time though, I came to realize that this was no answer, only a prophylactic to keep the problem invisible.

In the early nineteen-nineties I began breeding rare chickens to study their feather color/patterning and feathering/form genes. However, the most immediate issue became clear very quickly: chronic disease. At first I considered inbreeding to be the source of the suppressed immune systems, but even in very wide outcrosses, the problems persisted. Then I had blood work done and found the causative pathogens. Medications were prescribed, but they did nothing more than mask the problems and as soon as the medicine was withdrawn, the problems returned within 7-10 days.

So that set me on a path of research to understand how people in the pre-medication past dealt with such problems, what the poultry research community had learned about genes that impart resistance to given pathogens and how to practically apply that information to a breeding program to produce lines of genetically resistant birds. To spare the reader and daylily enthusiast the pain of reading many pages of details about breeding for chicken disease resistance, I will simply state that through combining multiple genes for resistance, I have been able to create lines that are fully resistant for two major pathogens: Mycoplasma gallisepticum and the Marek’s Virus complex.

My Background with Daylilies

I have been growing daylilies for nearly forty years. My first encounter with the genus was with the clone of H. fulva known as 'Europa'. My grandmother had this old-fashioned ditch lily growing here on the farm. There is no daylily more vigorous than 'Europa', so perhaps I will always be biased to what a daylily should be in regards to vigor and hardiness.

My first cultivars came from Gilbert H. Wild and Sons of Sarcoxie, Missouri. Throughout my childhood and into my teens, most of the daylilies we grew in my family came from the Wild's catalog. Most were Wild's introductions, though some were cultivars bred by other breeds that the Wild family sold through their catalogs. Over the years, I have heard disparaging remarks about the Wild cultivars from some daylily hybridizers. Usually the line of reasoning being that the Wild cultivars are somehow less than other breeder's cultivars because they weren't pedigreed or because they were mass produced and sold in large numbers, etc. My experience would indicate that they are not generally inferior. Some in fact are extremely good daylilies and are generally very strong cultivars that survive well, are vigorous and have surprisingly modern forms, many of which we would now call "unusual form".

Other cultivars from the Wild's catalog that we ordered and grew were from such breeders as Hall, Fay, Flory, Spaulding, Stout, etc. So my early experiences with daylilies were of older, very hardy, strong daylilies that displayed a lot of vigor and survivability. I only ever had one major problem daylily cultivar from the Wild catalog. It was a plant called 'Edged In Gold' and it died the year after it was planted - a foreshadowing of things to come in later decades.

In my twenties, I began to order daylilies from other sources. These included many Munson cultivars as well as other newer daylily cultivars from the late 80's and early 90's. Most of those daylily cultivars were strong growers, but a few showed problems I had never seen that were a surprise to me at the time. These problems seem to be amplified in many daylilies now.

As I entered my thirties around the year 2000, I again went through a phase where I bought a good number of daylilies. My focus at the time was on pink and lavender colored cultivars. While a few of these were good, strong plants, a great number were of surprisingly bad coloring, poor growth and/or poor performance. I have very few of those still growing in my garden as of this writing.

Around 2004-2005, my aunt had built a new house and started buying some of the newer piecrust type tetraploids. A few of these were nice plants, but the majority left a lot to be desired. This was our first introduction to really bad daylilies that displayed multiple problems within each cultivar.

In 2010, I began to actively and intentionally breed daylilies and added a large number of cultivars through to this year (2012), in order to bring in diverse, new genetics. In total, we have now grown over five hundred cultivars in the course of nearly four decades. We still have over three hundred cultivars, though that number is being thinned constantly. It is my goal to cull those numbers down considerably. I expect to choose perhaps 30 cultivars or fewer to be my major foundation breeders for strain development. My recent accessions have been to allow me to find a small number of excellent breeders to use with the small number of excellent breeders I still have around from the last thirty + years of semi-obsessed daylily collecting.