I really like brown daylilies. The truest browns catch my interest most, as it seems to be a difficult color to produce in a pleasing shade that can truly be called brown. None of my browns are the "latest and greatest" and none were expensive. When I started acquiring daylilies again, in the 2000's for my mom and aunt's yards, I wanted to find older, reliable cultivars that have good performance and nice expression of their traits, or at least were said to. I can always cull if a $6.00 to $10.00 daylily is a disappointment. There are some nice brown daylilies that can be had without spending a fortune, though there are a few that are not cheap (that I don't have) that are probably really nice plants to have around :-) My most expensive brown cultivar was Brown Exotica that I found for $20.00 at Harmon Hill Farm of Hudson, NH. (They also carry Mike Huben's introductions. Mr. Huben has been producing some very nice plants that you should check out as well.)

On to my few brown cultivars...

CHOCOLATE CANDY, is a lovely, reddish/black brown. It is more brown in person than the picture above shows, though not much. The edges of the flower are lighter than the center section. It is said to be a tetraploid. I did not get any seed set last year, but the pollen did prove to be fertile. Sun and rain fastness were not great, but not horrible either.

BROWN RECLUSE, is an interesting flower that is large and spidery. The overall effect is very fulva-like. The flowers were often spotty last year for me, and sometimes strangely formed, beyond being a spider. It is pod fertile with minimal seed set. Maybe it will set more seed as the clump matures. I did not try its pollen. I would actually call this color a copper/terra cotta/orange blend. It has marginal sun and rain fastness in my garden. 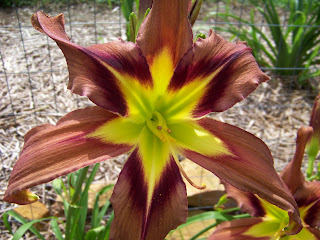 BROWN EXOTICA, above, is simply stunning! There is just no other word... The flower is large. The wonderful green throat creates a green star pattern with the darker, purplish brown eye. It is the most advanced and intense expression of brown of all my daylilies. It is pod and pollen fertile, though seed germination has been spotty and a good number of the seedlings have been weak. This should not be taken to mean that I think this cultivar is a producer of bad offspring. It is far too early to know. Rather, I only mean that I have had difficulty germinating seeds without heating them to around 75 degrees (which is said to be 'optimum germination temperature' for most daylilies) and that the seedlings of three batches of about 175 seeds(->about 89 seedlings) have produced seedlings that have not performed as well as seedlings from other pod parents germinated and grown in the same conditions. The problems may be my conditions and not the plant. Only time will tell. Regardless, the pollen is good. The flower has good rain and sunfastness. 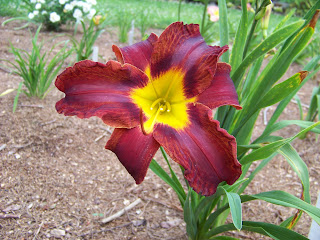 My favorite brown daylily is MATTHEW MARTIN, shown above. It is very sun and rain fast. The flower is not very unusual in form, but it is still very nice, opening well. The texture is good and it holds up very well all day. It also shows good fertility as both pollen and pod and the seeds germinate well in my conditions. The seedlings are also fairly vigorous. The morning coloring, shown above, is a deep rich warm brown with a reddish hue that reminds me of a nice leather couch. As the day goes on, as shown below, the color becomes more copper-brown. It is really striking all day. 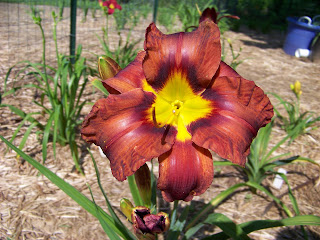