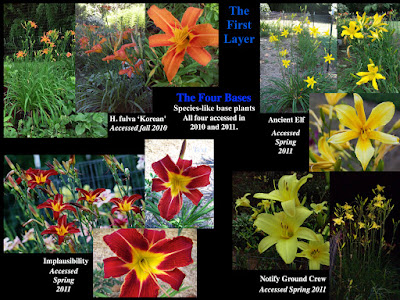 Part 2:
The First Layer:
Species and Near-species Base Plants

Initial backcrossing to species and near-species plants is fundamental to my work with tetraploids. The tetraploids were originally made by converting hybrid diploids through the use of colchicine to induce chromosome doubling. These conversions were originally made almost entirely from hybrid materials, either as converted plants or through seed conversion, that were several generations removed from the species. The one exception is Tetrina by Orville Fay, which was said to be a seed conversion of the species H. citrina. I have never found information on exactly what the pollen parent of that seed may have been, but it is widely experienced that H. citrina is self-sterile, so the pollen parent was likely something else, making Tetrina likely to be an F1 species hybrid, and not a true conversion of the species H. citrina. However, Tetrina only figures in the ancestry of handful of hybrid tetraploids and none of those have been widely used. Perhaps it was used more widely but is simply not in the registry information of such introductions, and perhaps not. The early conversions that were used most heavily, and are thus foundational to many or most of the modern tetraploids, were conversions of hybrids.

I began growing daylilies with the triploid species clone h. fulva 'Europa', the common ditch lily, which was thus my point of comparison for all daylilies. For a couple of decades I then only grew diploids. The first tetraploids I grew were older introductions by Fay, Marsh, Munson, and Hanson in the mid-1990s. While noticeably more robust physically than the diploids, they were generally not hardier plants. By the early 2000s I had begun to purchase "fancy" tetraploids with eye-edge patterns or piecrust edges. These proved to be far less hardy than the older cultivars I had been growing for many decades, almost never set bee pods, often grew and increased very poorly and frequently showed a host of problems with their flowers including difficulty in opening. By the time I had begun planning for a breeding program, I had already grown dozens of modern tetraploids. It was clear to me that the robustness of the plants, scapes and flowers was greatly desirable to me, and so my program would focus on tetraploids, but it was also clear to me that there were issues with the tetraploids that needed to be addressed.

Being familiar with the practice of backcrossing to species from both plant and animal breeding sciences, I suspected this might be a thing to look into for the Hemerocallis at the tetraploid level. I spent the time from 2008 to 2011 studying the Hemerocallis, both species and hybrids, to find leads that might offer material to make such an effort. I quickly learned that some species were rumored to be able to make viable offspring when bred with tetraploids, either through being triploids (and thus producing some 2N gametes) or through diploid species that were able to produce occasional unreduced (2N) gametes.

By studying the history of the hybrid daylilies in general and the converted tetraploids specifically, I began to suspect that the problems lay in the fact that from the first there seemed to be a focus on the flowers in the tetraploids, and there did not seem to have been a period when there had been a focus on "ironing out" the problems incurred in the plants from the conversion process such as issues with fertility, chromosome imbalances from irregular numbers of chromosomes and/or gene imbalances from chimeric or partial conversion. For this reason, I felt that if I could find species that could produce even small numbers of offspring with tetraploids, or conversions of species or near-species material that did not show the issues of the hybrid tetraploids, then I would be able to create a base of plants lacking the problems seen in many of the hybrid tetraploids, and be able to proceed to produce the types of flowers I was interested in, along with robust plant phenotype, all on plants with the fertility, viability and 'naturalness' (in terms of plant traits) that I wanted.

By a lucky break, I bought plants from Joseph Haliner in the late summer of 2010, which was one of the last years he sold or shipped daylilies. He was able to offer me guidance, suggesting that the Korean clone of the species Hemerocallis fulva was one that could consistently produce seeds when tetraploid pollen was used on it. He also suggested that in his own experiments, he had seen seedlings from such pairings that were remarkable in being fairly modern looking for first generation hybrids. He pointed out that the Korean clone had not been used in making the original daylilies and that no registered daylily hybrids had yet been made from it. Finally, he pointed out that this clone was a very vigorous plant that did not spread as widely as the common ditch lily and that it had shown considerable resistance to rust in his nursery. I was sold, and so the Korean clone of H. fulva became the first and main species clone that I chose to work with. I have since added other triploid clones of H. fulva that can produce seeds with tetraploids, such as 'Hankow', but the Korean clone has remained my main focus.
In the description below, you can click on the names of any pf the cultivars with a hyperlink (blue and underlined names) to go to the full page on that cultivar for an extensive description.
Hemerocallis fulva ‘Korean’ is just lightening in a bottle, in my opinion - pure magic! For my work, it is the most important of the species clones. H. fulva ‘Korean’ has turned out to be one of the most resistant daylilies to rust I have grown and tested, and to have extremely high breeding value for rust resistance. 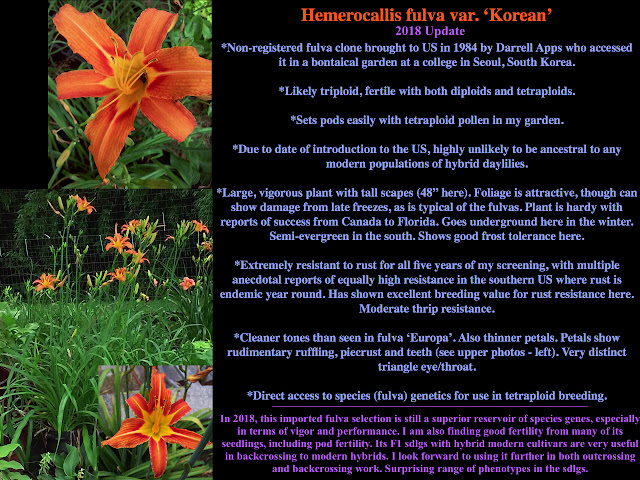 Next is Implausibility, bred by Nick Chase, which is H. fulva ‘Europa’ x Ed Murray. Fertile with tetraploids and a nice, bright red with a massive plant and tall scapes, it has contributed greatly to my program. The plant doesn’t produce much rhizomatous growth in my garden and the clump doesn’t crowd-out in the center over several years of growth. It can make a very large and attractive clump, though it has less thrip resistance than I like. 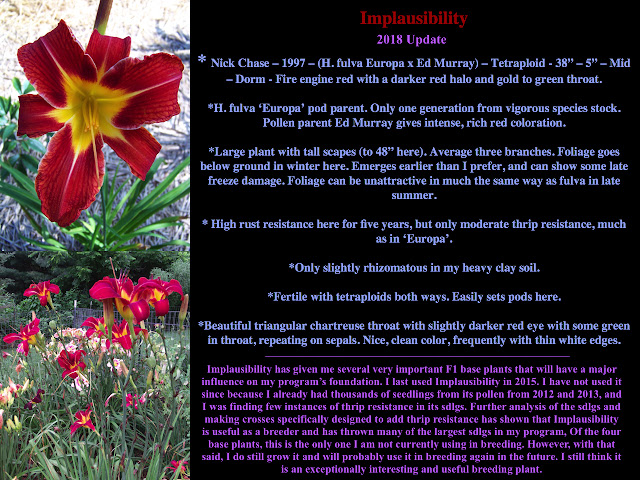 Ancient Elf by Jamie Gossard, which is made from a cross of the tetraploid conversion of Itsy Bitsy Spider x the tetraploid conversion of Nutmeg Elf, both of which are close to various yellow daylily species. I consider this cross a stroke of genius, with Ancient Elf the best of its all siblings. Ancient Elf has been extremely important in my work. It is extremely fertile and extremely rust resistant, and the plant itself grows well, increases well and doesn’t show serious die-out in the center of the clump or decrease in flowering after five years + of growth in a clump. However, it only shows moderate thrips resistance. 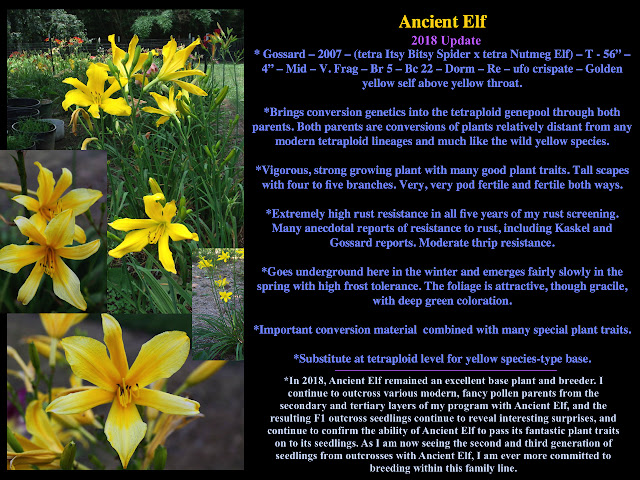 Notify Ground Crew from Curt Hanson, which has Tetrina and thus H. citrina genetics in its ancestry, as well as the tetraploid conversion of Purity (Traub - 1949). Curt Hanson’s program has been a big influence on my work and several of his plants are also part of my program, though none hold quite the level of prominence that Notify Ground Crew does for my work, though Women Seeking Men is close. Notify Ground Crew is highly fertile both ways and has made major contributions to my program. The plant itself is exceptional and the original clump in my hybridizing garden was finally divided this year at eight years, was still intact with only minor die-out in the center of the clump and was still blooming normally. Notify Ground Crew also shows quite good thrips resistance. 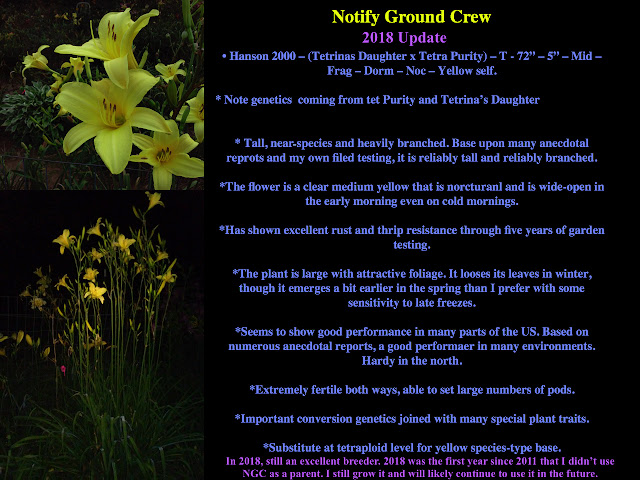 So these are the four major base plants. I have many, many seedlings deriving from each of them, and they form the basis of all my lines, in one way or another. Below are some other plants that I am using within my program and that may yet become major species/species-like base plants. I am listing them to give you some idea of what this layer of my program potentially looks like, both visually and in terms of the genetics of this level.
Temple Of Bacchus is an important plant, being an F1 cross with H. citrina and the tetraploid cultivar Papa Smurf. I don’t know the ploidy of Temple, but it has bred for me very easily with both dips and tets. If I had to guess, I would say it is a triploid. I think it has a lot to offer both diploid and tetraploid breeders, but especially tetraploid breeders, where its H. citrina genetics bring in a whole new dose of species genes, but in combination with an extremely well-colored, advanced, clean blue-purple. The high fertility is such a benefit, allowing Temple to be taken in a lot of directions. I have seen some amazing seedlings from Temple. Temple of Bacchus has made some very interesting seedlings in my program and is likely to yet become one of the major species and species-like base plants. 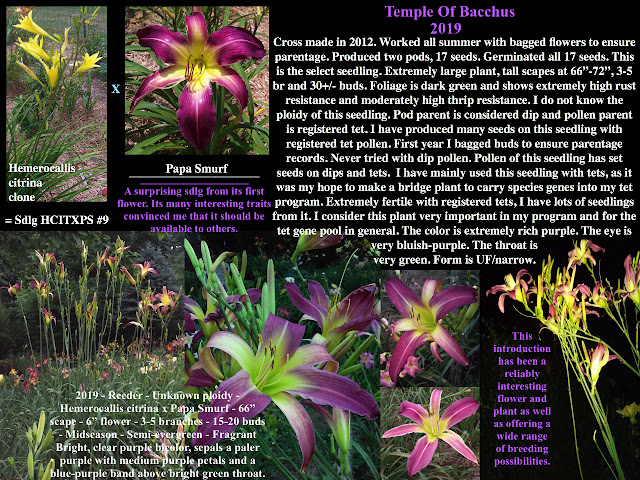 Frans Hals is an old favorite. I have used it extensively at the diploid level. I have a tetraploid conversion of Frans Hals that was made for me by a friend, and I have been working with it at the tetraploid level. I have high hopes that it will also become a base plant within my program. I know of no cultivar that can beat it for shear tenacity. I have grown the diploid version of this cultivar for nearly forty years. It is astoundingly tough. 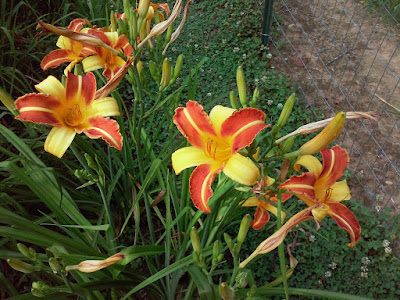 While none of the plants shown on this page have the fanciest or most modern flowers, they are extremely important, imparting important genes that are very hard to find or are completely absent from the modern tetraploid hybrids. What these bring to my program is the intangible traits that make a plant more than just a pretty face. On the next page we will look at the secondary layer base plants.
Back to Tetraploid Program Main Page
Back to Overview of Breeding Program Main Page
Part 1: An Introduction to the Foundation of the Tetraploid Daylily Breeding Program of Brian Reeder
Part 3: The Secondary Layer
Part 4: The Tertiary Layer 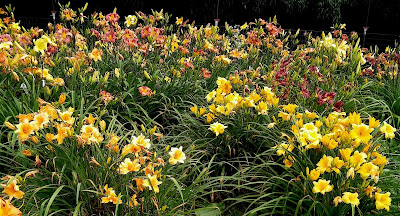