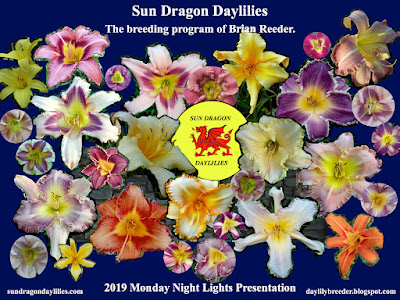 Part 1:
An Introduction to the Foundation of the Tetraploid Daylily Breeding Program of Brian Reeder

As we proceed it is important to lay a strong foundation to understand what I am seeking to do, and what I have done so far, in developing a unique and distinctive tetraploid program. I firmly believe that the tetraploid daylily plant has never been properly developed, though there may be a handful of individual cultivars that might meet my criteria. In most cases where such a superior tetraploid plant does exist, that is generally more to do with chance or accident, randomness, than any effort of the majority of tetraploid breeders to develop lineages of superior tetraploid plants. As is so often the case in plant breeding, when the flower is the majority of the focus, the plant is often given short shrift. Now, to be clear and fair, some breeders do give some attention to the plant. The problem does not lie with any one breeder, or with a exclusive love of the fancy flowers seen in the tetraploids. It lies in the fact that there was never a period when the tetraploid plant was stabilized after the initial conversions (as was done with peonies, for instance), before the flower became all. From the beginning of the tetraploids, breeders used whatever material they could find and there was an immediate rush to make flowers that could compete with (and then surpass) those seen in the diploids. Finally, while many conversions have been made since the initial conversions, those subsequent conversions have rarely been made because of the plant traits. The focus of conversion is almost always on flower traits, and time and again, such plants often show inferior plant traits. I simply can't pursue a breeding program of exquisite flowers on inferior plants, so for me to proceed with creating the flower phenotypes I visualize in my mind, my program has had to be based in establishing a plant worthy of such impressive flowers. 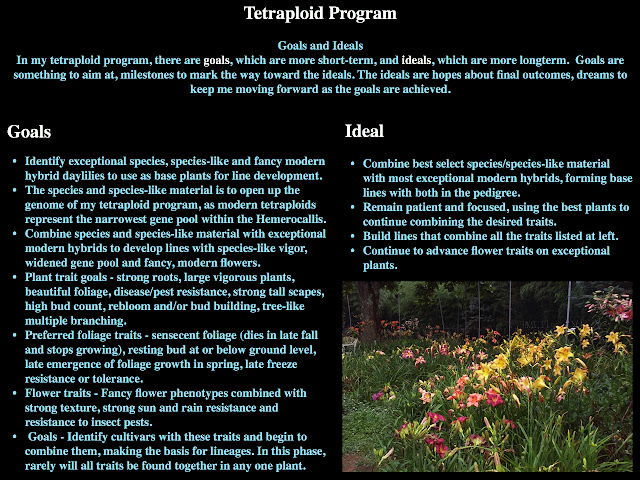 When considering the goals and ideals listed in the slide above, one of the most important things I have to remind myself and others is that 'beggars can't be choosers'. Because one can't just go out and buy a stock of plants that embody all these traits, finding plants that do show even one of these traits requires a process of testing that can take several years to be certain that a trait is actually present, is consistent and shows the ability to be passed on to its offspring (breeding value). In developing a program with a wide range of goals, it is a certainty that you will have to weave your own material from the best things you can find, and you will have to tolerate some flaws along the way as you keep combining desired traits and eliminating undesirable traits.

Patience is one of the main keys to such a breeding program. My experience with growing older daylilies and in breeding plants and animals tells me that the program I envision is possible. Because I know it to be possible, I am able to realistically look at the time it may take to reach some of those ideals I envision. My main influence is Dr. A. B. Stout, who was the main force in beginning the hybridization of daylily species and creating the hybrid garden daylilies. He took twenty years to span four generations in the development of the first red daylily 'Theron' (a deep burgundy/red/black color that would now be called "black" in daylily circles). Theron was made by crossing species plants, then both interbreeding the F1 and backcrossing them with species materials. The development of Theron is approximately five years per generation. In five years, you can have a pretty good idea of the quality of traits of a given daylily seedling.

Knowing this information at the beginning of my program, I chose a period of twenty years as the foundational period of developing my own program. In 2020, I am currently in the ninth year of my breeding work and in a few lines I am now into the third generation from the initial crosses on some of my lines. I am now slowing things a bit, taking more years between generations and evaluating seedlings for a longer period of time. The original twenty-year period is divided into four, five-year periods. The initial phase seedlings were culled very hard, screened for both rust resistance and thrip resistance. After five years of rust resistance screening, I was left with a handful of exceptional seedlings that passed all five years of screening with extremely high resistance scores (A+ - seeming-immunity), as well as a large number of seedlings showing equally high resistance through four years to one year. This period also represented the majority of the outcrossing of hybrid cultivars with species and species-like material.

From the start, my program has been divided into three types of plants. The slide below, from my 2019 Monday Night Lights presentation on Facebook, details these layers and their uses. 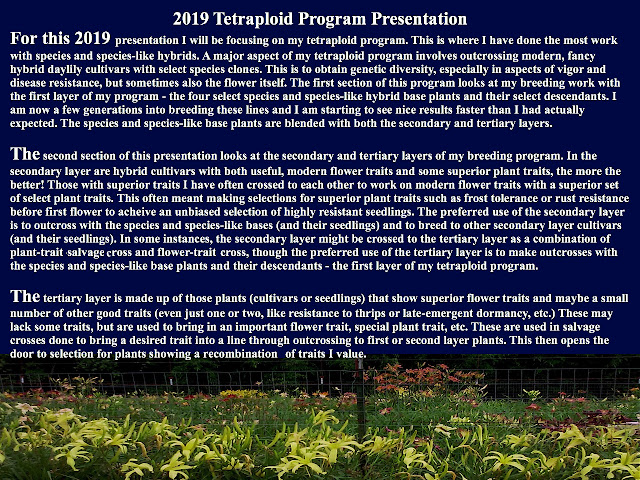 The first layer is the most important layer, because it is the source material which brings in a vast array of genetic diversity. These species and species-like hybrid cultivars offer genes that have been lost to the hybrid tetraploid gene pool, or simply were never there to begin with. The Korean clone of Hemerocallis fulva had never been used in the initial development of the hybrid garden daylilies, and even though it was imported to the US in the 1980s, I am the first person to make an introduction from it, in 2019, as far as I know. This Korean clone of H. fulva is superior to the most commonly known form of H. fulva, 'Europa', the common ditch lily. I believe its genetics are invaluable to improving many aspects of the hybrid tetraploid gene pool. 'Implausibility' is a hybrid that has the common ditch lily (H. fulva 'Europa') as its pod parent and Ed Murray as its pollen parent. Likely a tetraploid, it breeds easily with hybrid tetraploids. It is superior to the ditch lily, 'Europa', and shows an exceptional shade of red with a velvety sheen, both from pollen parent Ed Murray.

Ancient Elf and Notify Ground Crew are hybrid cultivars, but both come from converted diploid plants close to species and extending back to the early days of daylily hybridization. The show superior plant traits and with little direct relation to any of the modern hybrid tetraploid family lines, they offer valuable additions to the gene pool. Ancient Elf is from the conversion of both Itsy Bitsy Spider and Nutmeg Elf, which were then bred together to produce Ancient Elf and its various siblings. Both Itsy Bitsy Spider and Nutmeg Elf are outstanding diploids, both with simple yellow flowers that are species-like and both are only a few generations removed from various yellow daylily species. Itsy Bitsy Spider is a child of Mignon, which is an exceptional A. B. Stout cultivar from 1941 only a couple of generations from yellow daylily species. Notify Ground Crew is also very close to the yellow species, with Tetrina's Daughter (Fay 1971) as the pod parent and the tetraploid conversion of Purity (Traub 1949) as the pollen parent. Tetrina's Daughter is from Tetrina, which is a seed conversion from the species H. citrina. Both parents are thus very close to some of the original species clones used to make the hybrid garden daylilies.

The use of these four base plants was to open the gene pool of the very narrow tetraploid gene pool, and to open that gene pool with the most genetically diverse source materials available. As well, these plants brought in the kind of plant traits that I value such as robust, vigorous plants that can grow for many years without dying out in the center of the clump, tall and strong scapes with good branching and bud counts, reliability in many areas of the country and different environments, a tendency toward foliage senescence and dormancy, but with adaptability to warmer climates, bright and attractive flowers with clear colors, and excellent fertility as both pod and pollen parent. 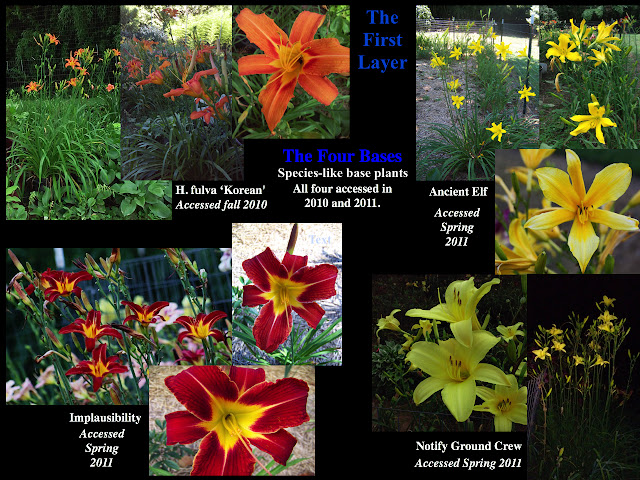 The secondary layer within my base program is made up of modern hybrids that show exceptional plant traits with flowers showing traits not expressed in the species. This layer was very important in making the initial outcrosses to the first layer plants, making first generation (F1) seedlings that showed very good plant traits and also, at the very least, contain genes for the modern, fancy flowers, though many have lovely flowers themselves. The results of this level of crossing were often much more exciting and advanced, than I had anticipated. The two slides below offer more insight into this layer of my tetraploid program. 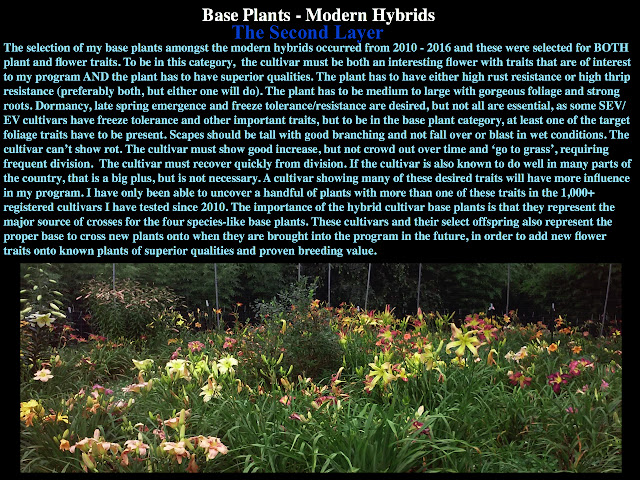 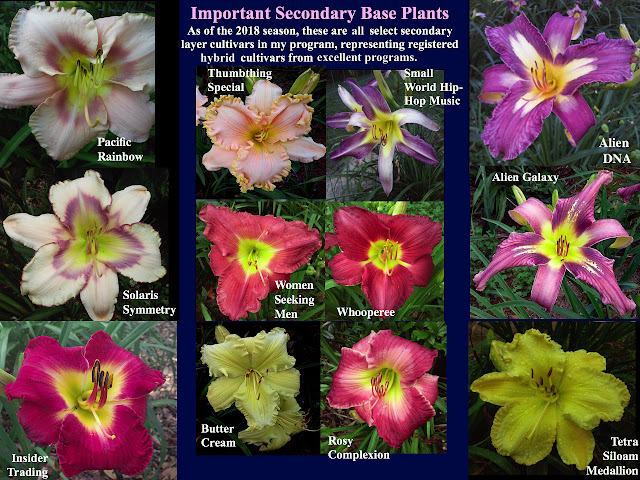 The tertiary (or third level) layer represents hybrid cultivars that are used for salvage crosses in order to bring in desired flower phenotypes from plants with less-than-desirable plant traits. In some instances, tertiary layer plants may prove to actually be secondary layer plants over time. In other instances, tertiary layer plants may only be used to contribute desired genetics and then eliminated from the program, so as not to intensify their undesirable traits too heavily within the program. Because of the ideals I hope to work toward, great care must be taken to not concentrate undesirable traits, thus negating the positive advances within the program. The two slides below offer more insight into the tertiary layer of my tetraploid program. 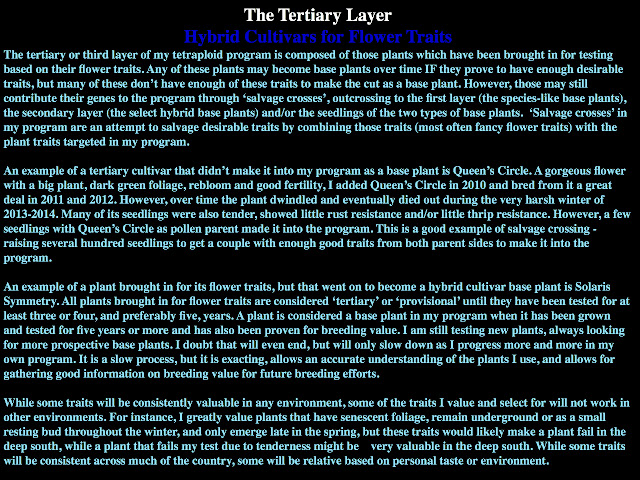 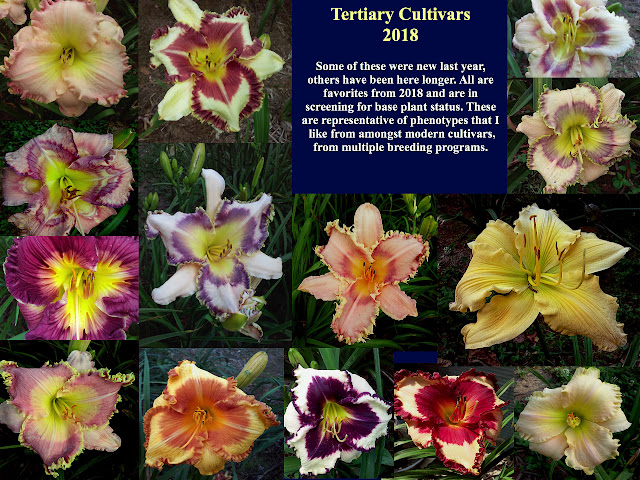 Now that I have outlined the way in which I am approaching the development of my tetraploid program, we can begin to look at each segment in more detail

Back to Tetraploid Program Main Page

Back to Overview of Breeding Program Main Page 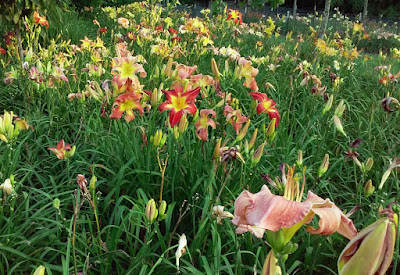