Daylily Domestication:
A Process That is Still in Process 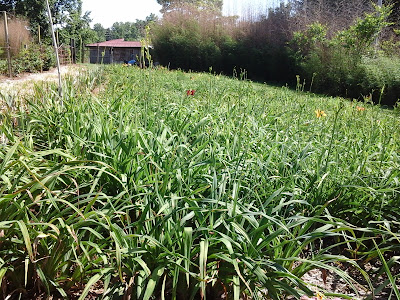 I have noticed this year, as I have observed the daylilies, that my mind has been drawn over and over to thoughts about the domestication process. My hobby is actually the study of the process of domestication, more than it is any particular species or 'genetics' in an abstract sense...specifically the study of the genotypic/phenotypic variations, breeding and selection of captive populations of plants and animals that are genetically changed from their wild type ancestors in various ways, is what most interests me.

When I observe the daylilies, I think about how far we have come in such a short time period. The advent of daylily phenotype breeding in the west began in the 1890's and from the start the early breeders utilized the fledgling science of selection and breeding - heredity - to guide their hand. The work of A.B. Stout is phenomenal and important. I am both surprised and disappointed how few daylily people have actually read Stout's book, or his many articles. His records are an unparalleled look into the earliest phases of a domestication process, detailing the hybridization of species into clonal lines and then away from their species roots to become very unnatural and very beautiful variations, family-lines that each reflect the genetic legacy of those original species in all their backgrounds, as well as mutations and new visual effects due to unique genetic combinations in the individual hybrid populations.

I want to say that I am awed and amazed by where I find the daylily today. In a mere century, daylily breeders have created a bewildering array of styles and variations, and they have done so on two ploidy levels. I am very proud of what we now have and I think all the extremes and oddities are a testament to the artistry and skill of the breeders who made them. I do not expect that pre-historic hybrid populations would have become so extreme as quickly as our daylilies have. I suspect that chickens took centuries to become something other than odd interminglings of two, three and four-way jungle fowl hybrids. It may have been hundreds or even thousands of years before various traits were put together in exclusive combinations in such a way that they would later become landrace breeds leading to the breeds we now know today. In the development of the modern garden daylily, we see a very accelerated development that is rather astounding, and I would also have to add: special.

But just because we see that fast progress, that doesn't mean we won't be susceptible to long-term trends. Provided that humans persist, I expect some will grow daylilies. Some will likely breed them as well, if anyone does grow them. So should daylily culture persist for millennia, what can they become? What amazing desirable traits can we combine and enhance and what might our oversights of bad traits have accrued into in the future? I always like thinking about the edges of the known in daylilies, as I suspect there are many directions as yet untapped. Those directions may never be tapped, but they are still there waiting. Any variation seems amenable to selection, if you start applying selection to it. But even beyond that fringe of thought, wild traits as yet unrealized, what does any of this mean for the day to day breeding of daylilies? I would suggest it means we need to pay attention to a wide range of traits and be very intolerant of undesirable traits.

I recently posted an article on corn domestication at my Facebook page. (The link is here. I highly recommend reading this article!) Corn and wheat domestication are very fascinating to me. Both are ancient events on opposite sides of the planet that came to the same basic outcome. There are other examples - each fascinating - but these two have always captured my interest, especially. So when I had first read the article a some time back, the next few days in the garden had my mind abuzz with thoughts of examples from corn breeding applied to daylilies. The early corn breeders weren't selecting for flowers, but they still made aesthetic and practical selection decisions that ripple down through the ages to us today.

One of the major selection decisions they made was to move away from the wild-type seed-scattering phenotype and toward the desirable non-scattering seed head that allowed all the grains to be harvested at one time. In essence - a selection decision toward a specific seed phenotype. All the hundreds of domestic versions of corn and wheat tend to show these non-scattering genes to this day, so it is likely this selection decision dates from the early days of their domestication. It is in essence the basis of the domestic forms of these plants. This makes me think that if we apply selection to any traits where there are variations in our daylilies, we can select toward, and even intensify, desirable types.

But it is important to realize that selection is not just for the flower traits, even though that should always be a major point of selection, constantly pushing the boundaries and bringing out new traits. However it needn't be the only area of selection. There are many plant traits, seed traits, disease-response traits and environmental-adaptability traits that can (and should) be selected for. With that said though, I am not saying each breeder needs to select for every trait, just that they should be aware these things can be selected for and then choose those traits to select for that are of the most importance to themselves.

I fully understand how hypnotic the flowers can be. I have to actively remind myself to look at the plants when the daylilies are in flower. If daylilies didn't flower, I can guarantee you that I wouldn't grow them, but there is more to the daylily than the flower. There are so many traits in the daylilies that can be selected for. Try looking closely at your plants. Look at the traits other than the flowers and when you see a trait that displays variations across different cultivars (or seedlings), that is a trait to which you can apply selection, choosing those which display the variation of the trait(s) that you prefer. The selection possibilities are at least vast, if not unlimited... 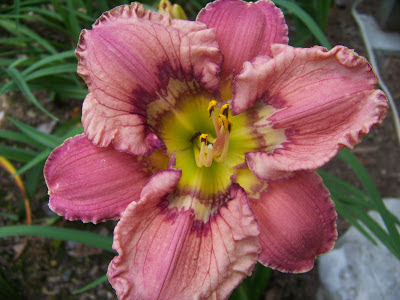