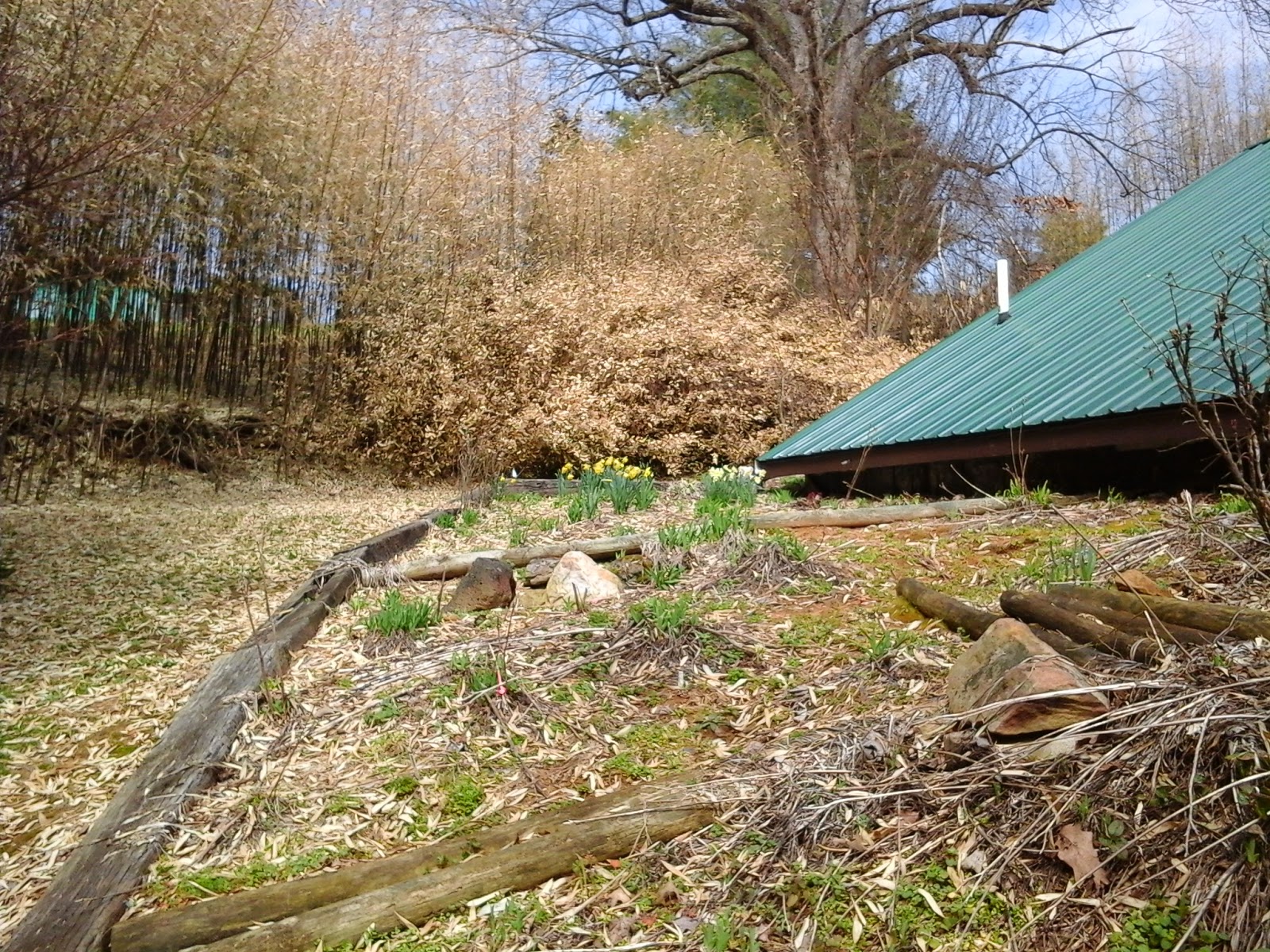 It has been a few weeks since I have made an update to the blog. I have been busy with outdoor work and with planting seeds and culling older seedlings. I have taken the time to get some pictures over the last couple of weeks for this update, so let's get to it...

My new seedling shelves are working out very nicely. I am very happy about that. I don't want to make a habit of raising this many seeds in the house every year as I have come to prefer planting in the fall directly into the ground, but I will always have a few crosses that either don't produce many seeds or that are very important to me for whatever reason, so I wanted a very useable set of shelves for those seeds (as well as other things like hosta, heuchera and annuals, etc.).

This year, I did have some special crosses and some crosses with very few seeds (and some of those were very special too), but I also had so many seeds that to get everything planted, some needed to be done indoors. I am also running an experiment where I had large amounts of seeds from a  given cross. In this experiment, I am planting seeds outside directly in the ground in the fall, indoors in February and outdoors into 20-gallon barrels this spring (04/05/2015). I am doing this to see if I can note any variations in the growth, hardiness and maturation of these cultivar's seedlings. 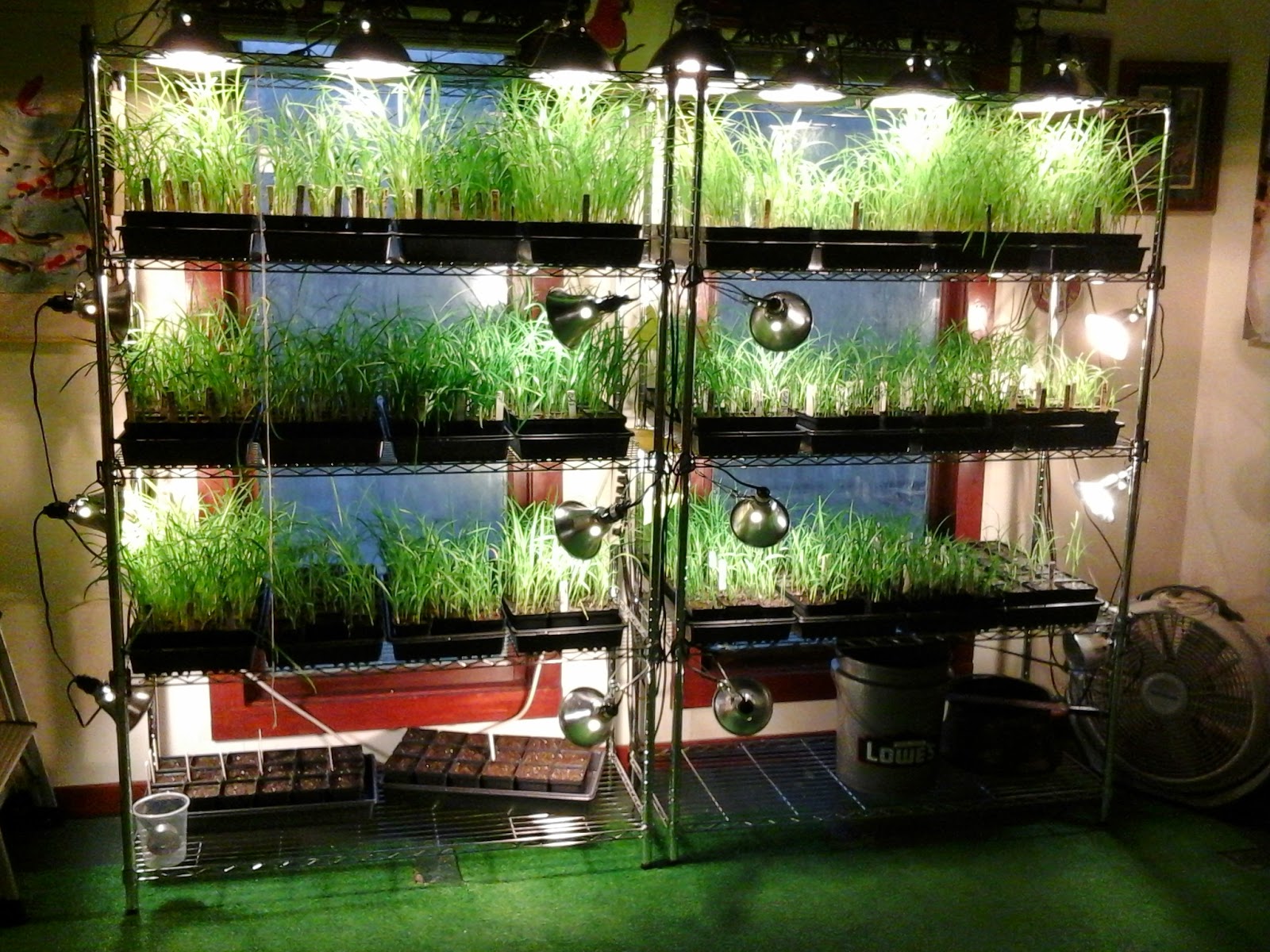 Seedling shelves - 04-03-2015. Note the two seemingly empty flats on the bottom left shelf. Those are trays I just planted with annuals - marigolds and zinnia. The daylilies are growing like crazy!

As you can see, the daylily seedlings are growing well. I would point out that I do not have extensive or expensive lighting for this setup though I do have direct sunlight from the windows behind the shelves. The lights I am using are simple clamp lamps with 100-watt equivalent 'screw-in' fluorescent bulbs. The top shelves have three clamp lamps each with one in the middle for a total of seven lamps, while the lower shelves each only have two clamp lamps, as you can see in the picture. All the shelves are growing well, though the upper shelves are growing slightly faster. I think the main factor for the growth of the seedlings on all the shelves though is the natural sunlight they all receive. For my previous posts on the shelves click here and here.

I have found that very few daylilies actually require any cold treatment (for instance, I started all my seeds in August in 2012 and got great germination across the board in late summer on over three hundred cultivars with NO stratification... The only seeds that didn't germinate until the next spring were some of the species), though you often hear that stratification is necessary. I have found that stored dry on the shelf, dry in the fridge crisper, moist in vermiculite in the crisper, or planted as soon as they are harvested without drying or stratification all work.

In fact, I get so many seedlings that over the last five years I have developed methods to excise the weak seedlings by any means possible. Since I produce so many seeds, my goal has been to do as much culling as possible at every stage and before I ever see the first flower. So I cull from the start and do things or grow the seeds in ways that will expose weakness and kill any seedlings with the potential from certain problems.

For instance, I tend to keep seedling's soil moist to encourage rot. Indoors I use trays with no holes. While I don't go out of my way to raise the humidity in the room or house, I do keep the soil moist most of the time by bottom watering in the trays. I want anything that will rot to rot. The sooner it can rot, the less effort or resources I have to pour into it and I am potentially lessening the possibility of having mature plants that rot when they are moved and/or divided. 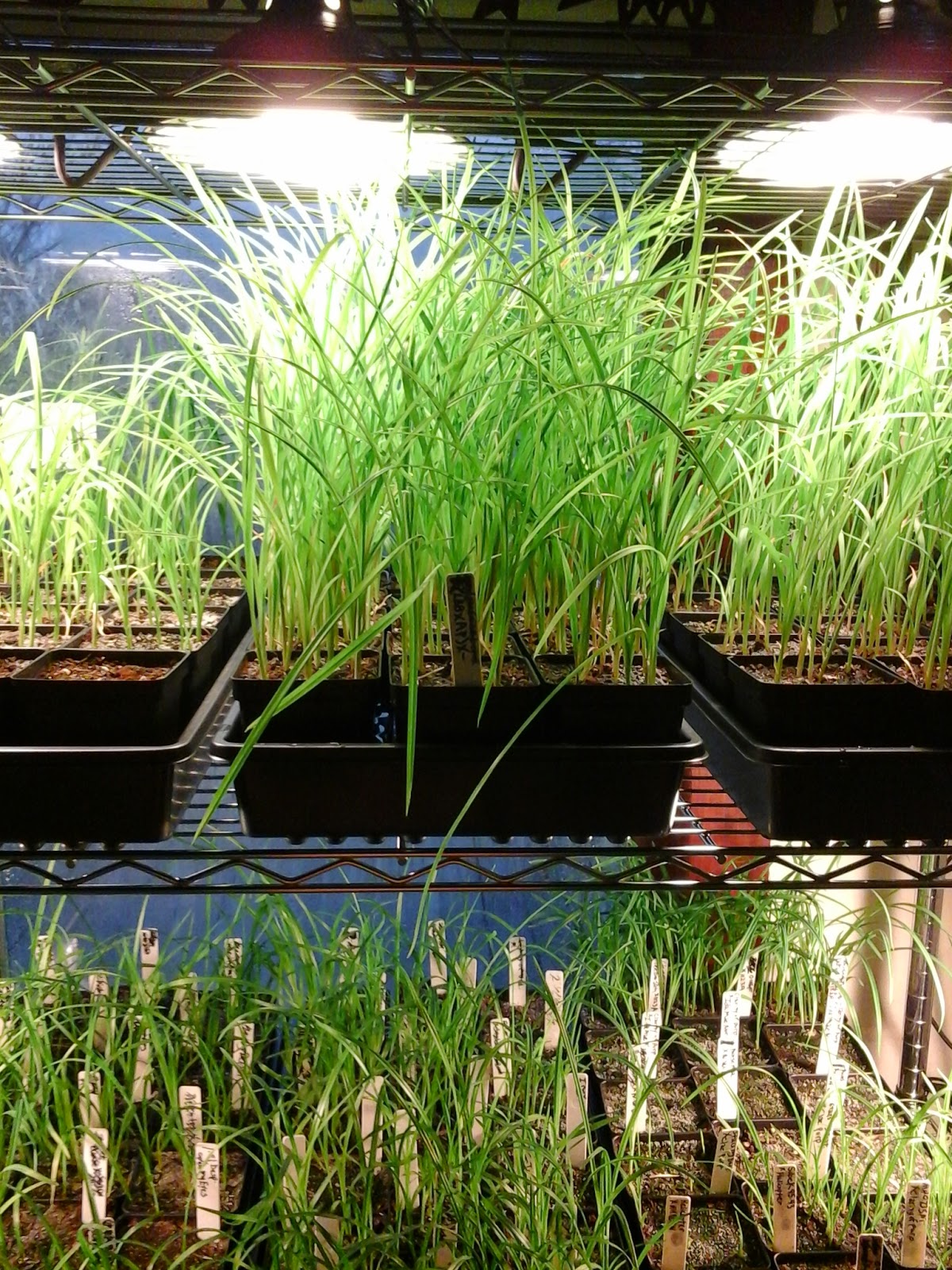 Seedling trays without holes for bottom watering and to hold water to keep the soil moist.

I have used outdoor tubs that have holes drilled about six to ten inches up on the side to form a water reserve. The water reserve keeps the soil quite wet during much of the year and at any time that there is significant rainfall. In fact, when raising seedlings in these tubs, rotters tend to rot fast and few tender evergreen seedlings survive...and good riddance. In very dry periods, though, these water reserves keep me from having to water those tubs very often. So it is a win-win - a tool for culling and a method of cutting down effort and resource expenditure in dry times. It is important to stress that neither of these methods are controlled, scientific experiments. I am not using the controls that would be necessary to gain actual research data, but what I can say is that by using these methods I am unlikely to be winding up with the weakest or most rot-prone seedlings... 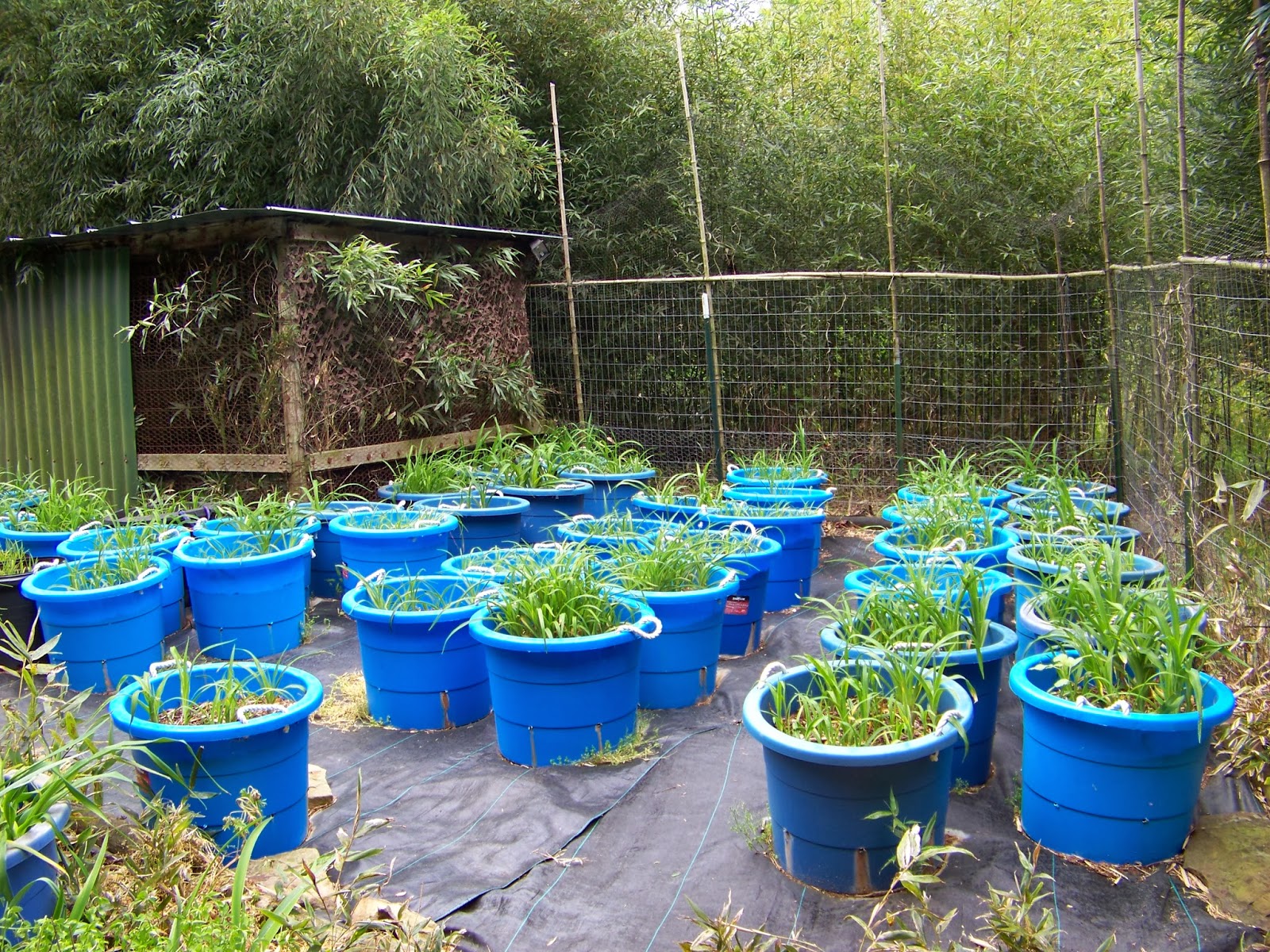 Seedling tubs with water reservoirs made by having drainage holes drilled several inches up the side of the tubs. These cause moisture-sensitive seedlings to rot and tender evergreens tend to die in these during the winter, while they reduce watering during dry periods.

So I am now to the point of having seedlings ranging from a mere few months old to seedling that are going into their fifth year. The oldest seedlings are at the stage where they have been culled for many traits and have had many seasons of selections for traits such as foliage traits, rust resistance, etc. This year these oldest seedlings will get their final culling and this one will be for their flowers. The final selects will then be dug and divided and the last culling will be based on how well they deal with division. I tend to feel that I should spend four to five years observing and deselecting any given batch of seedlings in order to know what any given seedlings (or group or cultivar) is really capable of. Even at that, I can't know everything, and I can't know how any of these plants will perform in vastly different environments. 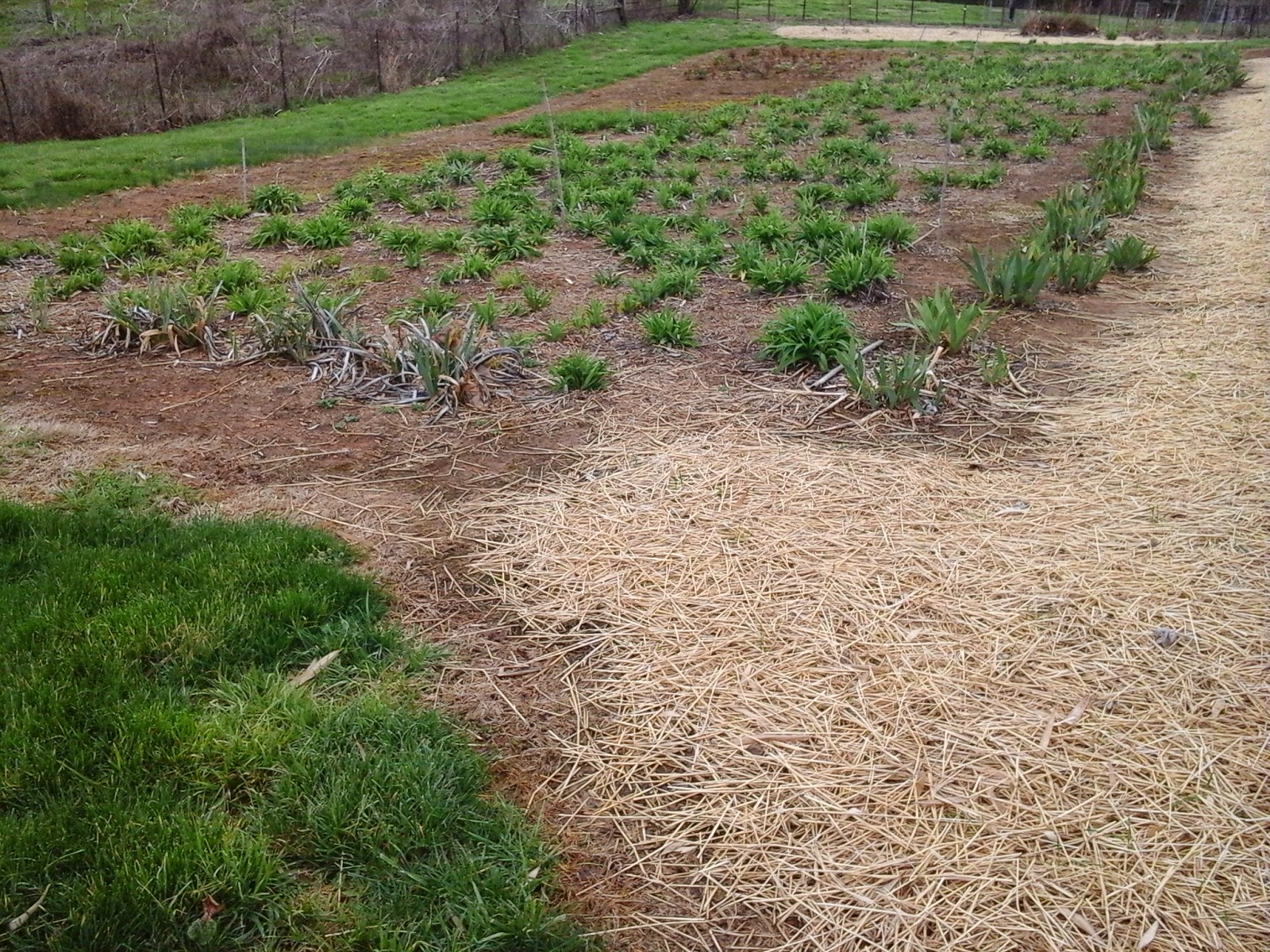 Grow-out bed with 3 to 5 year old seedlings. Note the many, and often large, open areas. That is from the culling of the last two years. I have begun filling in these gaps this spring with seedlings that are the survivors of the tubs. The seedlings from this winter in the house will also go into this bed as time allows through this spring and summer. Once the big final culling happens on these older seedlings this year, there will be a lot more space here.

In closing up this section on outdoor seedlings, I have noticed that the seeds that were directly sown last fall/early winter are now starting to germinate. More on those in a later post. I also finished moving one and two year old survivor seedlings out of the tubs and into the grow-out bed and was able to finish planting the last of my seeds from 2014 this month! I did over 100,000 seeds this year...I need to use lots of methods to cull as fast as possible.
Posted by Brian Reeder at 8:21 PM