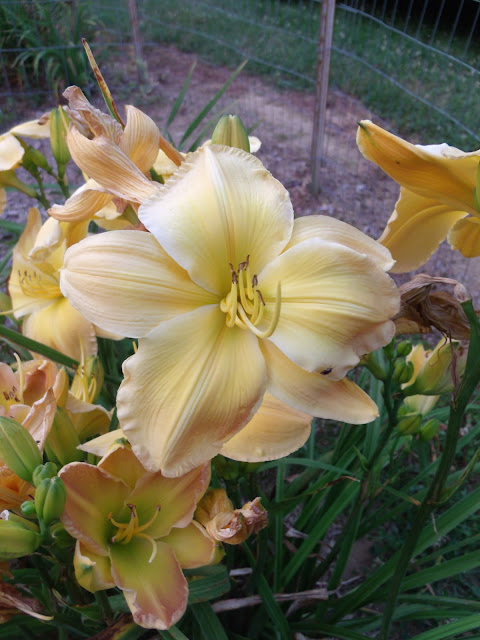 I fell in love with Substantial Evidence (click link for a full description) the minute I saw it. One pet-peeve I have had for a long time is with hybrid daylilies that display beautiful eyes but that are only partially opened, sort of like the trumpet form one sees on many species of Hemerocallis, but usually with shorter and rounder petals. I remember the very first blue-eyed small dip that I had in the mid-1990s. I would look at its partially opened flower and think how pretty that would be if the flower was more open, and that the 'ultimate' would be to get such eyes on flowers as flat as a plate, or for that matter, how lovely absolutely any color or pattern combination would be on such a flat flower.

When I was beginning my breeding program in 2009-2010, doing research on new types of daylilies before I started buying new cultivars to breed with, I ran across Substantial Evidence and was immediately hooked. I had to have it! I imagined a thousand different faces, all with that amazing flat flower, and then I imagined how that flower style might look when combined with other flower forms, such as narrow spiders and unusual forms. I had wanted to focus only on tetraploids, but when I saw Substantial Evidence and realized it was a diploid, I knew I was going to have to work with this diploid line until I could get its genetics at the tetraploid level. By working with it at the dip level, I would have a better idea of how to use it at the tet level, once I was finally able to obtain representatives of this family line at the tet level, which I have since done. 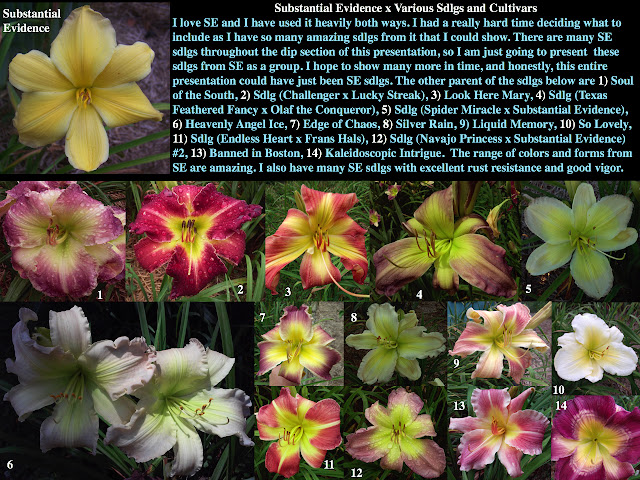 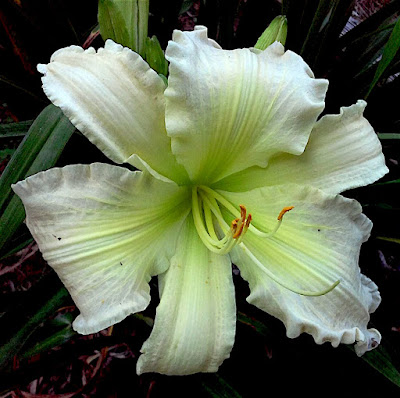 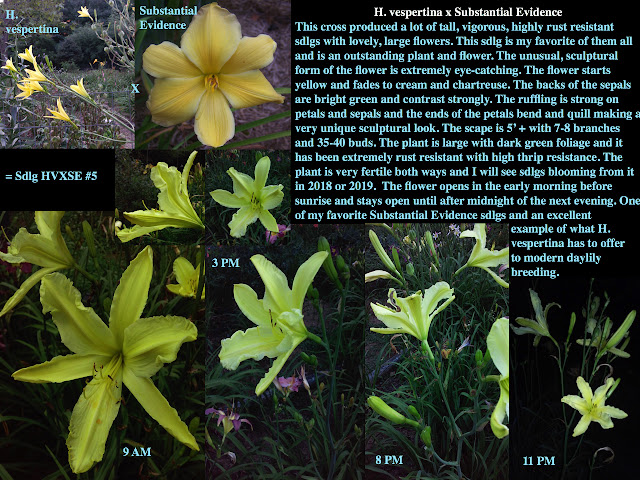 The cross of Substantial Evidence pollen onto the species form known as H. vespertina, often mistaken as a variation of H. citrina, but show through genetic work to probably be a species as suggested by cladistic modeling (click here for more). This cross produced much more interesting results than I had anticipated, creating larger, more open and much more modern and much more interesting flowers than I would have thought possible. The plant habit is strong and the scapes are tall and well branched with lots of buds. 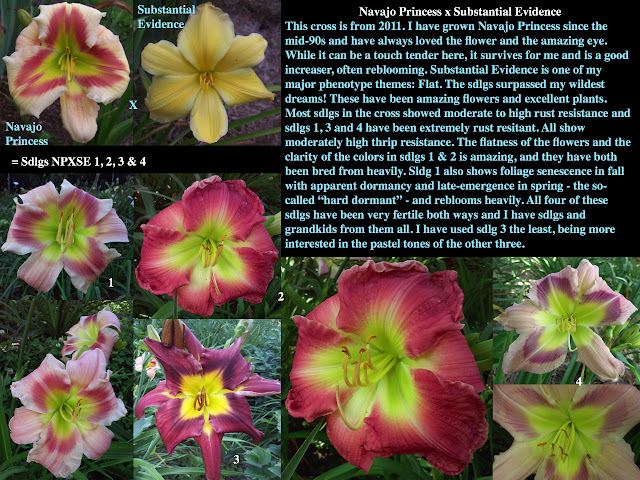 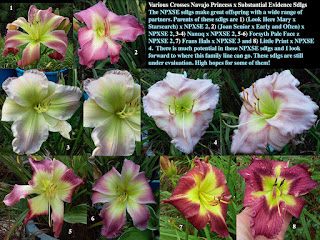 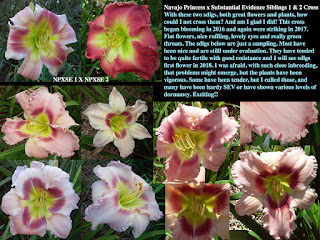 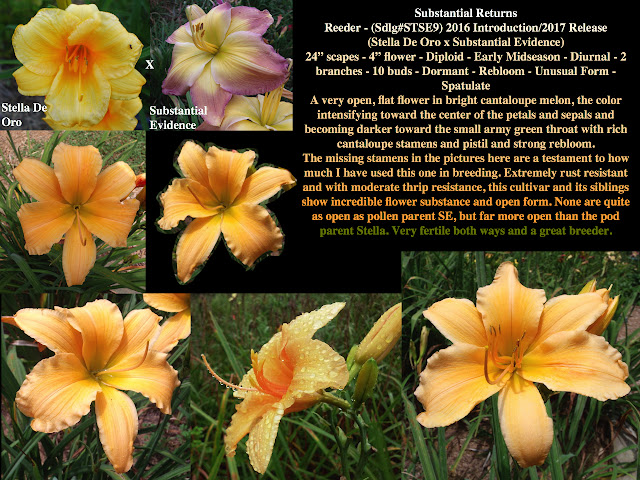 Substantial Evidence was known to throw reblooming seedlings when I bought it and so I thought it would be interesting to include Stella De Oro in crosses just to see what would happen. I was actually quite shocked by what I got in the first generation. I have three introductions from this cross. Substantial Returns is my favorite, because it is the melon-based color that the original Stella De Oro has been noted to carry by other breeders such as Darrel Apps and Mike  Huben, as well as its spatulate form. It can show a very flat form on established clumps and throws seedlings that are even more advanced than it is, as you can see in the slide below. For more on Substantial Returns, click here. 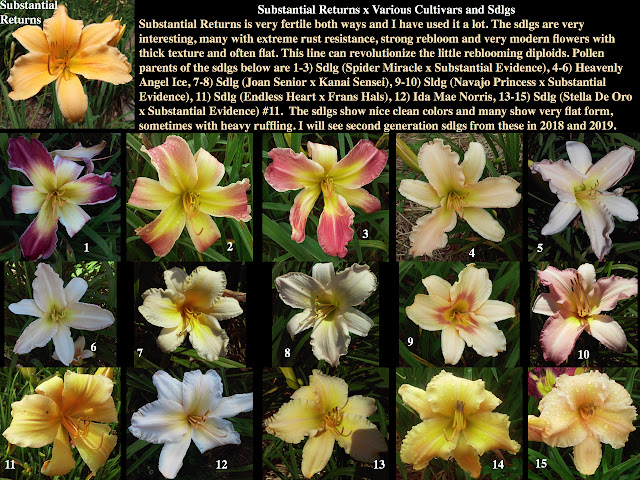 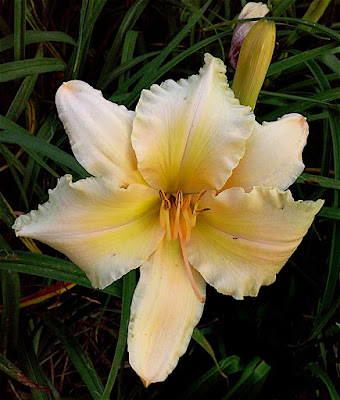 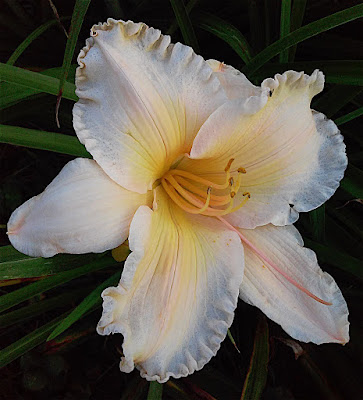 Two seedlings from Substantial Returns crossed to a full sibling. 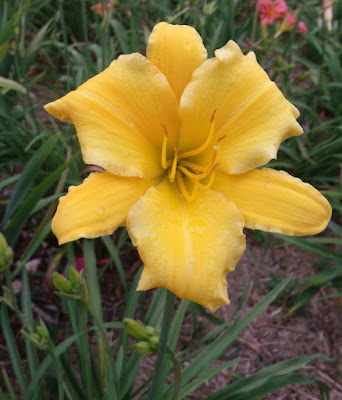 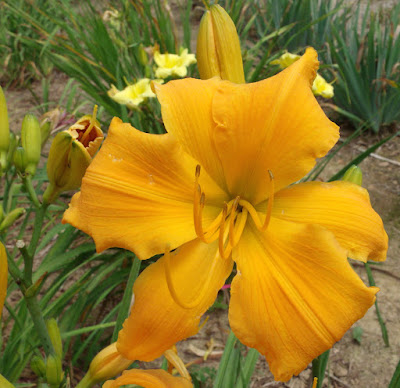 Substantial Glow also shows extremely beautiful form and acid-orange color that stands out from a distance. Both of these cultivars are full siblings to Substantial Returns, and all three have shown exceptional breeding potential. Click name for more information. 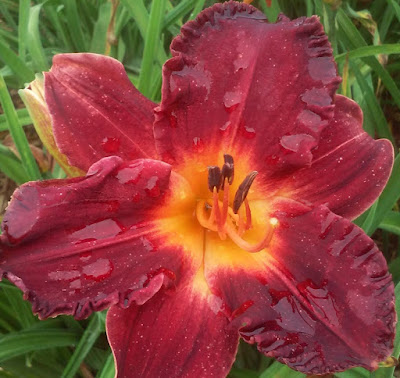 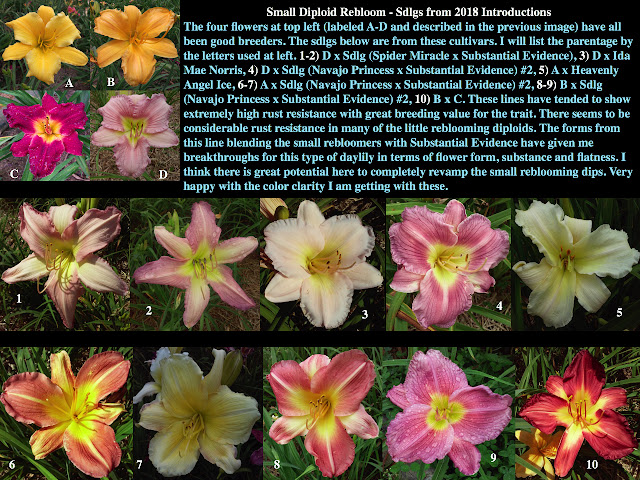 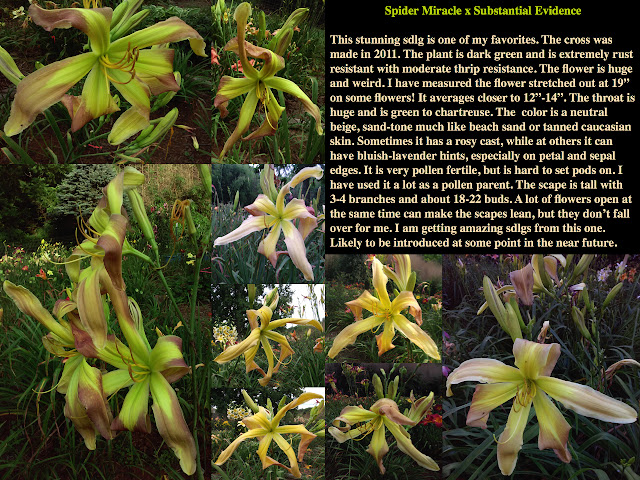 I had grown Spider Miracle since the 1990s. It was my first introduction to the concept of narrow forms, unusual forms and cascade style. I have always loved Spider Miracle and thought a lot about how different daylily traits would look on that style. I even pollinated it several years in a row well before I started my current program in 2010, but I never got any seed set. In 2011, the first year I had Substantial Evidence, even though I had never gotten seeds on Spider Miracle, since I was spreading the pollen everywhere anyhow, I pollinated every flower on a large clump of Spider Miracle with Substantial Evidence pollen and got one pod. That one pod contained five seeds. Two germinated and this was the keeper. When this plant bloomed for the first time I was simply amazed! The flower was huge and far weirder, and more wonderful, than I had ever imagined it could be. The flowers are always very large, and sometimes they are down-right huge. 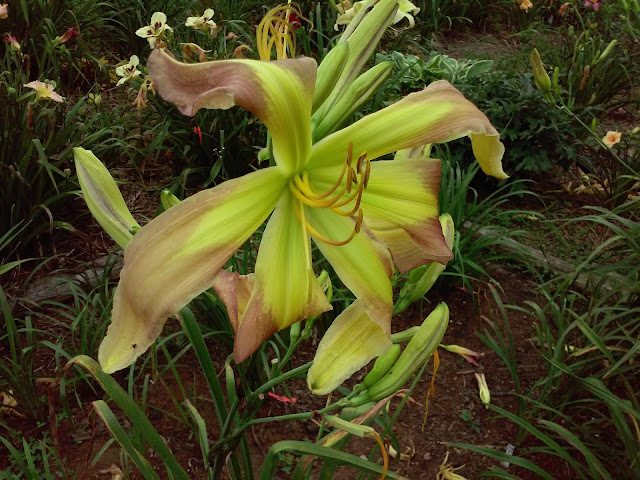 (Spider Miracle x Substantial Evidence) has proven to be an excellent breeder, producing an amazing range of seedlings in a wide array of interesting forms and colors, including very interesting lavenders and purples. 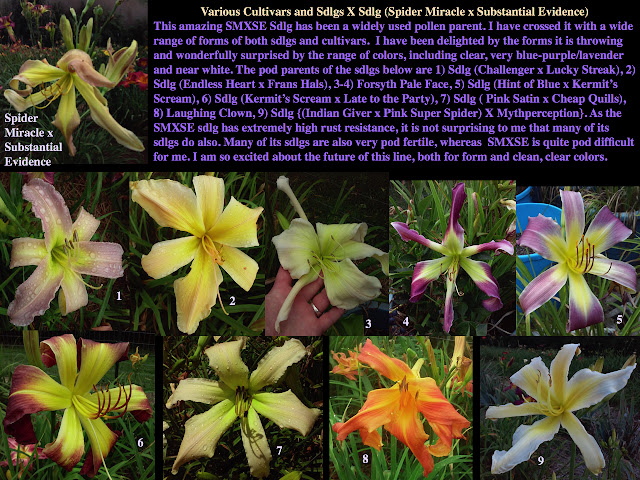 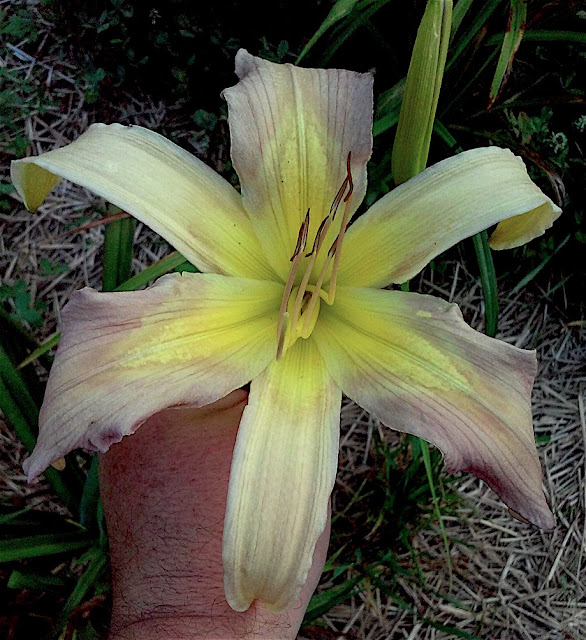 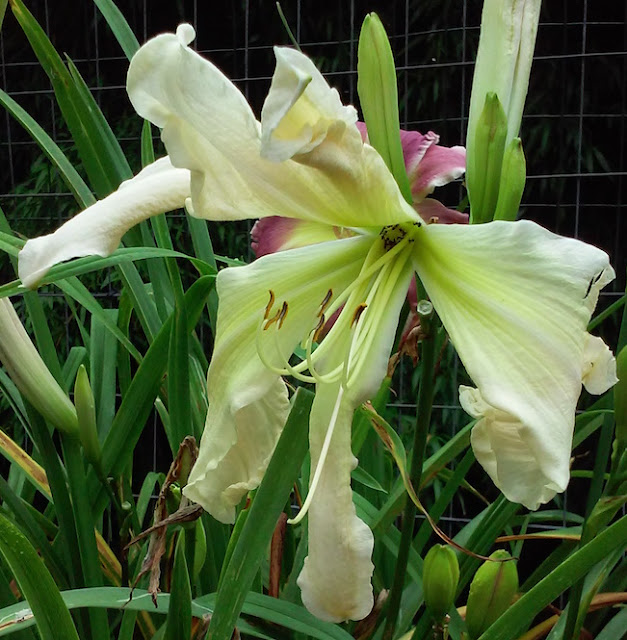 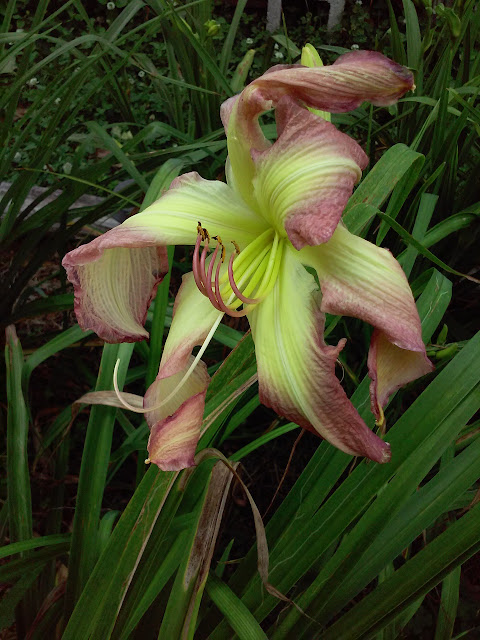 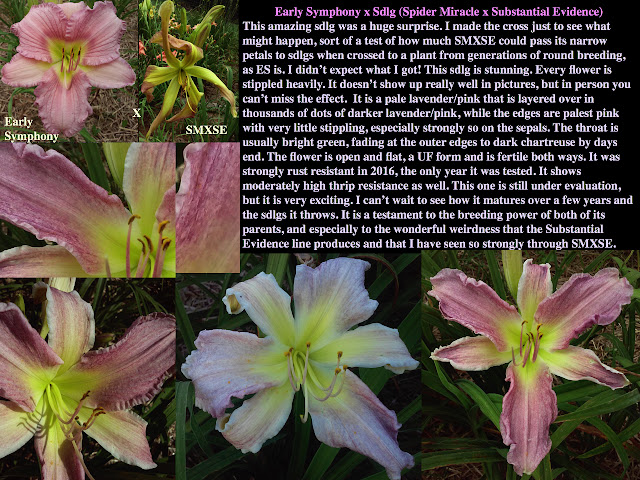 This is a very interesting broken patterned/stippled seedling! 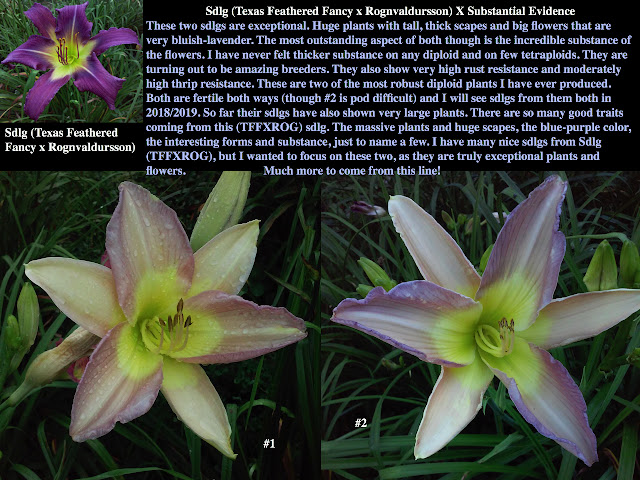 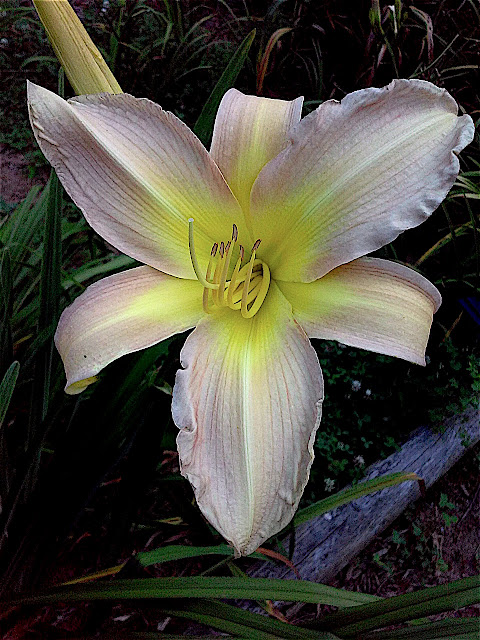 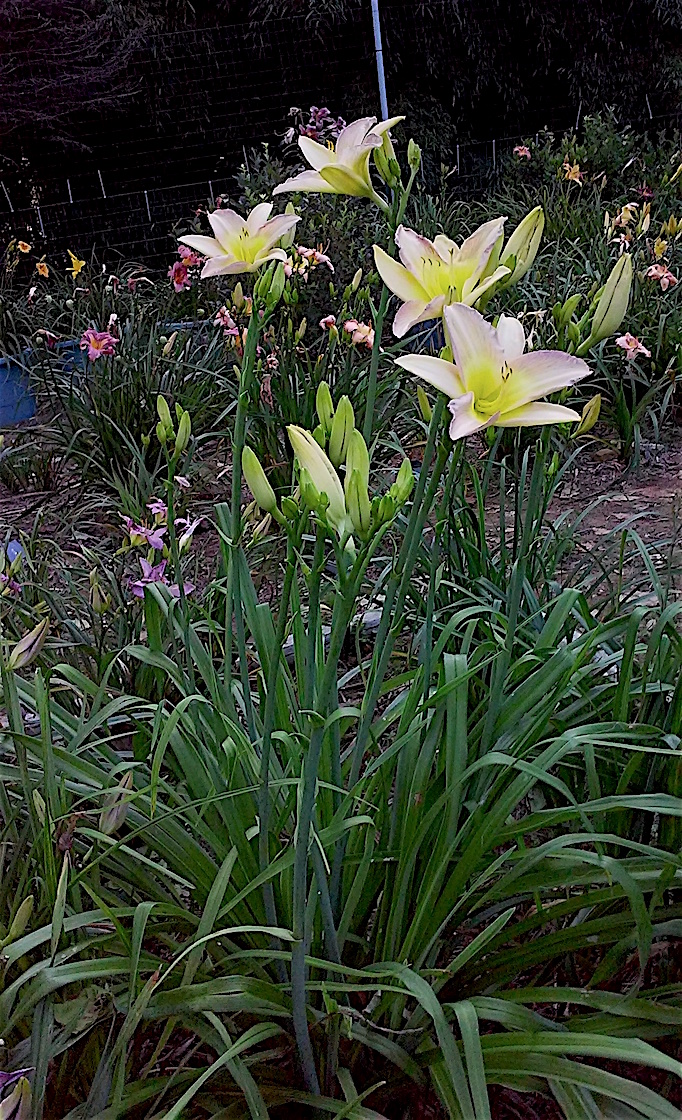