There are many ways one can go about incorporating resistance to rust (or crown rot, spring sickness, etc.) into his or her breeding strategies. Those who have the best opportunity to do so will be people breeding in the deep south, where rust is a year round issue (or wherever a given pathogen/problem is most active), but people in other locations can make a contribution in their own way as well. All-out resistance breeding such as one might expect from a USDA agricultural station is probably impractical for any hobbyist (and yes, even the ‘big names’ are hobbyists when compared to true commercial agricultural endeavors, be they for ornamentals or food). However, that doesn’t mean that hobbyists can’t make great strides in intensifying the levels of resistance seen in their breeding programs.

One of the first steps is to begin to identify cultivars that show some level of resistance. The next step is to allow rust to run through your seedlings when it appears in your garden, even if only in the fall once every few years. This is certainly better than doing nothing. Interested persons in the south, especially if they are not actively selling plants, can discontinue spraying programs and test their daylilies against rust throughout the year. They have the greatest opportunity to make fast strides in breeding for resistance and in both identifying resistant and susceptible cultivars and putting that information to use in their programs. As well they could be of great benefit to others by sharing that information so those who do not have their ideal testing situation can benefit from their experience. For those who may be collectors in the deep south, not selling or hybridizing, and who would be willing to host plants from northern breeders and not spray (at least in the fall and preferably year round) a great service would be to gather data on resistance levels of those hosted plants and relay it back to the breeders. Those willing to do so could be trained in observation of rust and rating rust infection so that accurate ratings could be assessed. Anyone willing or able to do this would be providing a highly useful and specialized service for his or her fellow hemerocalliphiles!

It is important to understand that there is a difference between immunity, resistance and tolerance. I can’t stress this enough, so I will repeat here the differences. Immunity is when an organism shows no susceptibility to a given pathogen. Resistance is when the organism shows some susceptibility to a pathogen, but the effects are not as severe as in the worst individuals. The level of resistance can vary widely between individual clones. Tolerance is the ability of a given organism to show lower-than-average adverse effects from the presence of a given pathogen.  And of course we should also consider susceptibility, which means showing effects from a given pathogen. Susceptibility will vary from mild (also called ‘high resistance’) to highly susceptible (‘low resistance’, which is sometimes lovingly called “a rust magnet” as these highly susceptible individuals often seem capable of literally sucking rust out of the air).

In selecting potential breeding stock for a resistance breeding project, one mistake that many people make when beginning to resistance breed any species, is that they believe they have to start with totally immune individuals, but that is not the case. I suspect there is one or more major genes that show dominant gene action and infer near or total immunity to rust, at least when homozygous. I suspect this would not be terribly common in daylilies, but it is likely to exist. However, I suspect that the majority of resistance we see is the accumulation of lesser factors (minor genes or polygenes) that accrue to increase resistance incrementally. Many of these factors seem to be recessive, so it is possible that even some very rust susceptible plants are carrying genes for resistance (and only test matings to other resistant plants would confirm or deny this, and I mention it because it is possible to get a resistant offspring from a susceptible parent, and even when both parents are susceptible, there is still the slight possibility of an offspring with some level of resistance higher than the parents, suggesting both may be carrying recessives for resistance).

So let us first consider the different types of breeding programs we might adopt in regards to rust. I see three major ways this could be approached:
1) – Breeding for resistance as a major focus with all efforts geared toward producing the highest levels of resistance in the most offspring, i.e., making every effort and using all resources at one’s disposal to move the levels of resistance within the entire gene pool maintained towards high resistance and/or immunity.
2) – Breeding for resistance as a major trait to be selected for, but not as the sole focus of the breeding program, i.e., seeking to increase the levels of resistance in one’s overall gene pool, but not making resistance the sole point of focus.
3) – Passive selection that would encompass an awareness of rust and rust resistant cultivars, incorporating one or more of those resistant cultivars into the breeding program and noting, recording data about and possibly culling (especially seedlings) for rust on the occasions when rust does appear in the garden, i.e., seeking to at least incorporate some resistance genetics into the overall gene pool and being somewhat educated about rust in general.

I would stress that none of these three groups necessarily have to be mutually exclusive, nor do they all have to be pursued in the exact same way. Each breeder must decide where on the spectrum he or she wishes to fall and then proceed from there.

Now let us consider each of these three categories for a moment. The first may be pursued by a university or professional operation and with many thousands of seedlings, strict controls and protocols and extreme notation, and might also incorporate lab techniques and methodology. This is likely outside the realm of possibility for any hobby breeder. However, any hobbyist may chose to emulate some of those protocols and make resistance the main focus of their breeding. This would be the strictest and most focused system and likely produce the fastest results. I also have to say that I think it is the least likely to be pursued by hobbyists. This style of breeding may well be too narrow in focus for most hobbyists, but if you think you are cut out for it, then please, only allow me to encourage you. I am not cut out for that system, as I have too many interests beyond simply creating resistant lines, and after having spent many years doing this type of work with poultry, I simply want my daylily work to be a bit more creative and fun; a touch more light-hearted while still taking rust resistance and other plant performance traits seriously. I think most reading this will feel the same way.

The second category is much more realistic for hobby breeders, even those who want to make breeding for resistance a major factor (but not the sole factor) of their work. This system is probably more suitable to hobbyists because it allows focus on other points beyond resistance and can be pursued a bit more casually (even though you may still be very serious about what you are doing). I know breeders out there who have been pursuing such a program for some years with great success. This type of program is probably most suitable for those in the Deep South or anywhere that rust is recurrent yearly and preferably in both spring and fall, but could still be utilized by those only with fall rust or who may not see rust every year, though it will be a bit harder there and may require special considerations. This is more in line with the system I am pursuing in my own breeding work.

The third category is for everybody else. It will be useful for the greatest number of breeders and is much more passive in nature. This style will be especially important for breeders in the North and for those who do not recurrently and reliably get rust (even in the fall), those who must spray (at least in the spring and summer) because they sell and those who want to help in some way but don’t have the time, energy, interest, expertise or proper setting/location to pursue a more elaborate program. This system would be based around incorporating known resistant plants, cultivars or seedlings, and utilizing those in the breeding program. This could encompass as many or as few resistant cultivars as desired. If one wanted to be as active as possible in the passive program, one could make an effort to collect allegedly resistant plants, putting emphasis, for instance, on those that have been resistant in many locations and over many years. Conversely, one may take their time, research and speak to many individuals and find only a handful of know-resistant cultivars that suit their other interests and incorporate those into the program.

The key is to bring in plants that show resistance and use those in the breeding program. In this way, there is at least the chance of increasing the level of resistance factors in one’s gene pool. There would be special considerations with this work that is discussed further below and it must be realized that this type of system will not actively create resistant plants or lines, but will increase the chances of such. One other thing that can greatly enhance this is to allow rust to manifest on the occasions when it occurs, especially in the seedlings and if possible, to send select seedlings to more reliably rusty locations for further testing. At the very least, gathering anecdotal evidence from client sources can help you to make selection decisions and that information could be offered, merely for what it is – anecdotal – to your clientele and other breeders. If neither of these is possible, at the very least, you are considering rust, you are educating yourself about plants with resistance and you are making some effort to include plants with resistance for the chance of increasing resistance in your program. That beats doing nothing, or inadvertently breeding from a group of highly susceptible plants!

With any system you chose to work within, there is a group of well-known breeding methods that can be employed. I will list some that are well-known in the plant breeding profession and then we will discuss them in less technical and more hobby friendly terms in the second part of this topic.
In 1921, the well-known American geneticist Sewell Wright described five types of plant mating that can be applied to plants that are self-fertile or can be outcrossed. These five mating systems are fundamental to all plant breeding, though some are used more than others, depending on the type of plant breeding being pursued. At some time or another, all of these five have been used for breeding daylilies, and all have their practical applications still. These five systems are as follows: {Note – the abbreviations are my own notation system for convenience}
As you can probably see, these five styles of mating encompass most of what we all already do in daylily breeding. I have made the effort to give an example of each that is related to breeding a popular trait in flowers, but as we discuss these systems, we will consider how these systems, already familiar from selection for flowers and other phenotype traits, applies to rust resistance breeding.

We will end here for now and in our next installment we will pick up with a more detailed discussion of these breeding techniques and how we might apply them to our goal of breeding for rust resistance... 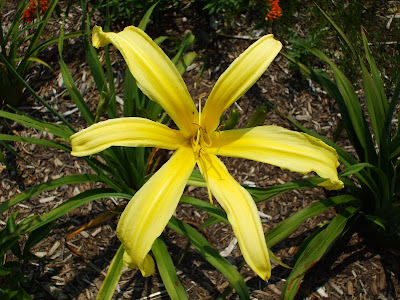