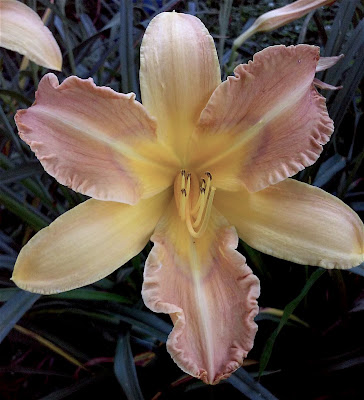 Origin Of Symmetry is a full sibling to Ancient Ent and Sun Dragon, and the cross represents one of the most productive and important (in hindsight) that I have ever made. When I made the cross in 2011, it was because Ancient Elf was one of the species-like base plants I had selected based upon its having conversion parents of excellent diploids on both sides, being very pod fertile and begin alleged to have very high rust resistance. I used Solaris Symmetry because it was the tallest and most dormant blue-eyed near-white tetraploid I had. Only later, through many years of growing them both, would I come to realize just how good they both were and what a stroke of luck the pairing of the two was. From its first year of flower, I knew that the seedling that would become Origin Of Symmetry was something special. 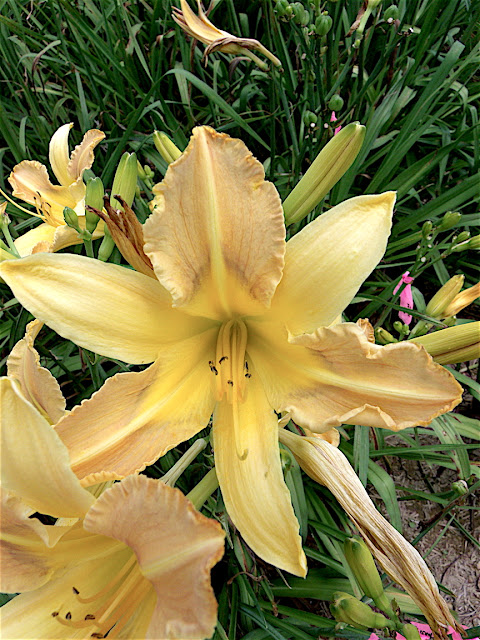 Seedling bed 2015
Origin Of Symmetry is the best patterned of all its siblings, and frequently shows the interesting lavender, gray and burgundy bands that you see in the picture above. It is also has the lightest toned petals of any of its siblings, always being a very clear, attractive peach. The lovely, balanced, open-formed flower has a very ruffled edge, adding to its drama and movement, and the edges are lighter than the petals. 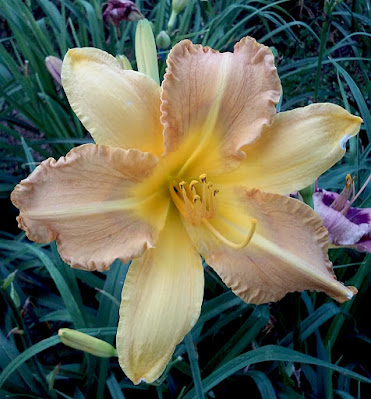 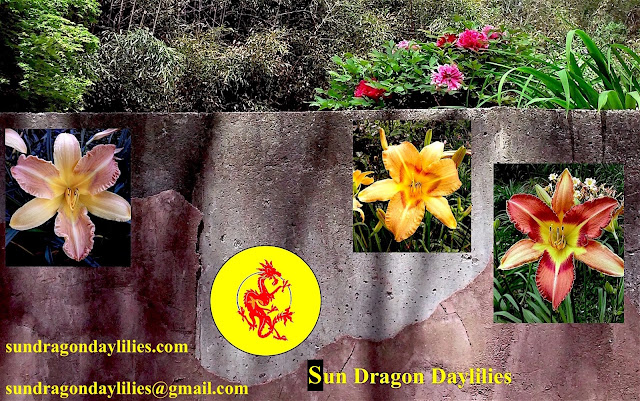 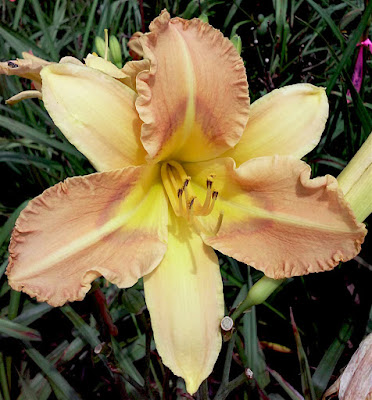 But the flower of Origin Of Symmetry was just the beginning. Germinated in the late summer of 2011, all of the seedlings of this cross went through all five years of my rust resistance screening. While the whole cross showed high rust resistance, I kept culling them down to those with the most exceptionally high, A+ level resistance every year, finally going down to 11 seedlings that I am still growing and have bred from heavily. 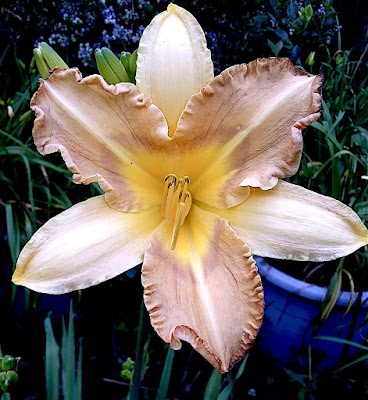 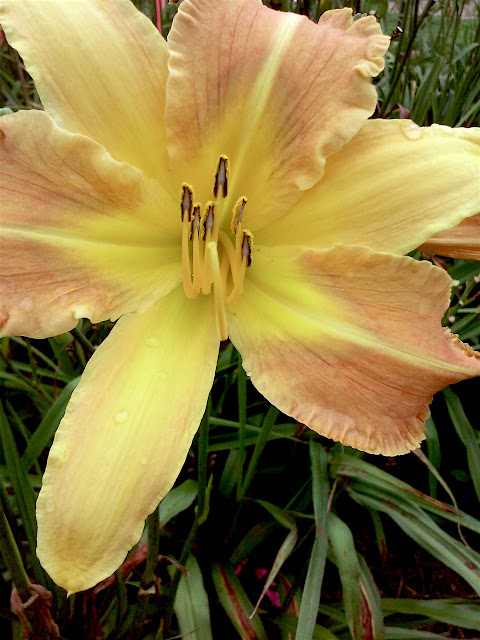 The entire group of siblings show exceptional plant traits. Origin of Symmetry has one of the best flowers of all the siblings, but it also has an exceptional plant with gorgeous green dormant foliage that does not show summer dormancy, and that goes fully dormant in the winter and doesn't emerge until fairly late in the spring, missing most late spring freezes. The rare very late spring freeze can catch Origin Of Symmetry already up and growing, but it bounces back very well, as I learned in the spring of 2018. 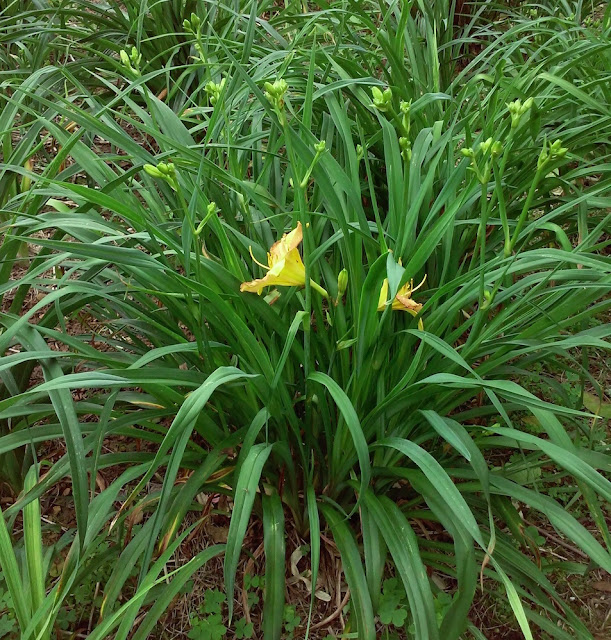 In the spring of 2018 we had a very late freeze in late May that went to 23 degrees F. Origin Of Symmetry was already up and growing, as up until that point, we had been experiencing a warm, early spring and it was fully leaved out and had scapes forming when the late freeze occurred. The foliage showed slight damage and the scapes were damaged and stunted. The very short scape down in the foliage is one of those damaged scapes. However, Origin Of Symmetry put up a full round of instant rebloom scapes, as you can see above, that went on to reach normal height and give a normal round of flower, just delayed by a couple of weeks. Origin Of Symmetry doesn't normally show this kind of instant rebloom, at least not to this level, but it shows that its will to produce that first round of scapes is really strong!
The typical rebloom from Origin Of Symmetry is later in the summer, and I have seen it put up scapes as late as October. I can't say enough good things about the foliage of this entire group of seedlings. You can see the foliage of Origin Of Symmetry in the picture above, and that is in a year after a very late, very hard freeze. Origin Of Symmetry passes all these good traits to a high percentage of its seedlings.

Scapes in early June in the line out bed before the flowers have started opening
The flower itself is lovely, with its subtly patterned band and its gorgeous pastel peach coloring. It is very visible in the garden and attracts a lot of attention. With the amazing branching and plant traits, it makes a stunning, tall display in the garden. While not as tall as sibling Ancient Ent, it is still an impressive height that towers over the majority of the garden. But while the plant is a garden wonder, it is its power in the breeding program that truly amazes. Even better, Origin Of Symmetry is extremely pod and pollen fertile, just like pod parent Ancient Elf and will set a pod on nearly every flower pollinated.

Below are several seedlings I have produced from Origin Of Symmetry over the last few years. They all tend to be tall, well-branched with gorgeous foliage and strong rust and thrips resistance. But more than that, they go into a wide range of gorgeous colors, which the simple peach color of Origin Of Symmetry might deceive you into believing was not possible. While pod parent Ancient Elf is a simple yellow flower, pollen parent Solaris Symmetry is a very beautiful, clear near-white with bluish-lavender eye and edge with the occasional eye pattern and cristation, so the genes for these modern, fancy traits are in Origin Of Symmetry and its siblings, even if they might appear to just be fulva-like to those who don't take the time to look more closely. Take a look at the breeding power Origin Of Symmetry contains, and remember that these gorgeous flowers are on tall scapes with good to great branching, gorgeous foliage, vigor and hardiness, along with high rust and thrips resistance. 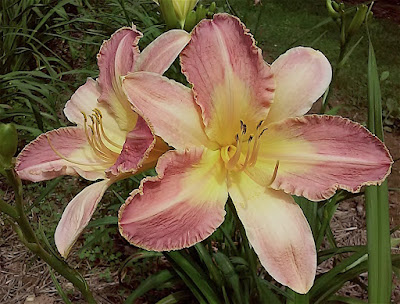 Origin Of Symmetry x Solaris Symmetry (a test backcross that proved extremely good, reiterating the fine traits of the lineage) 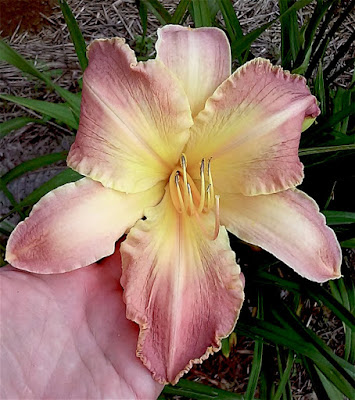 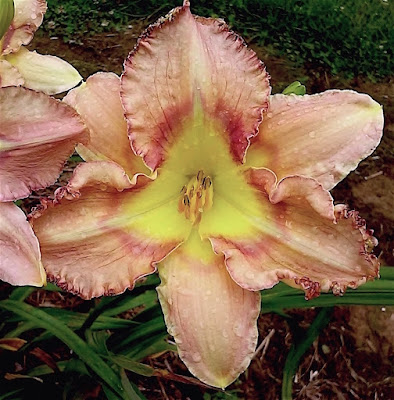 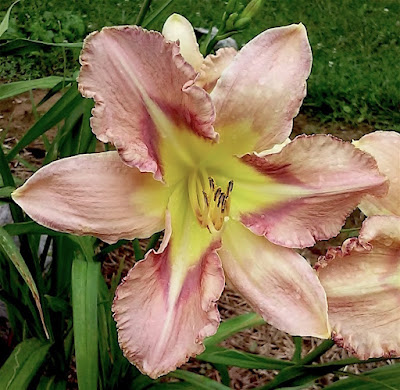 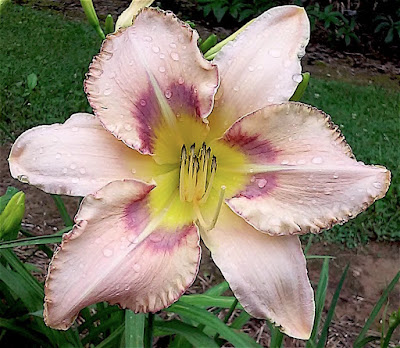 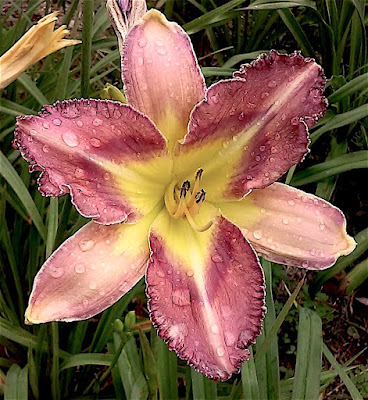 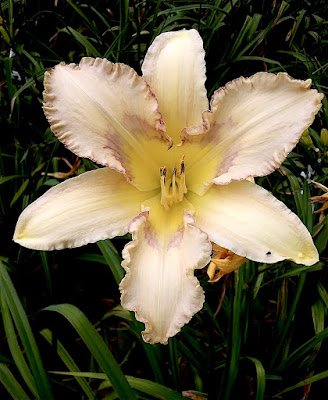 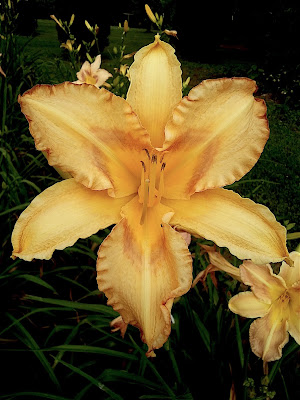 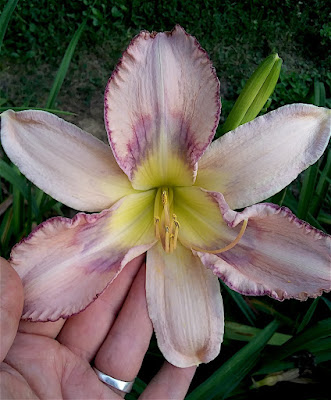 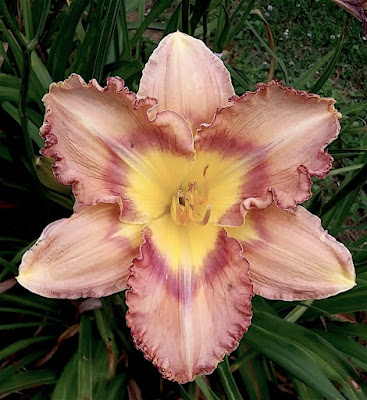 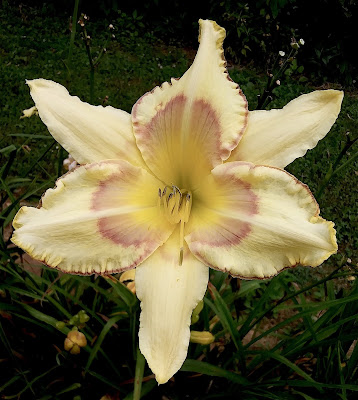 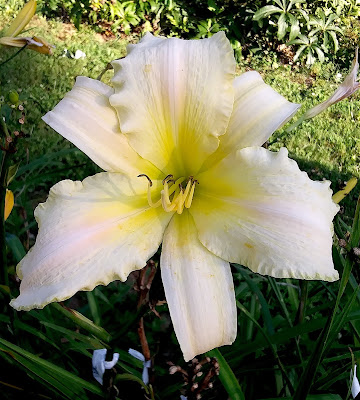 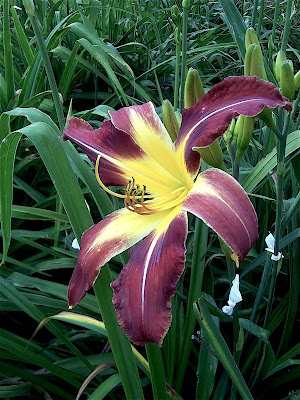 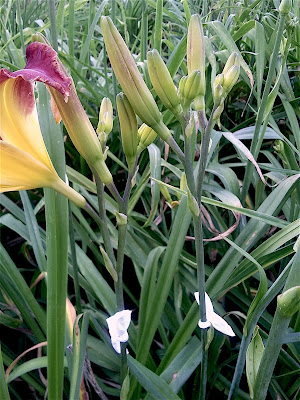 Origin Of Symmetry x Small World Hip-Hop Music (seedling above) showing the dark scapes I have seen in some Origin Of Symmetry seedlings
Origin Of Symmetry is a remarkable plant, flower and breeder. I believe that this family of siblings are the most important plants that I have produced in the foundational breeding phase of my hybridizing program. They have exceeded my expectations, and in some ways, even my wildest hopes. While beautiful and a stunning garden plant, the breeder potential sets Origin Of Symmetry and its siblings apart and makes them extremely useful and valuable in a breeding program for many, many reasons. 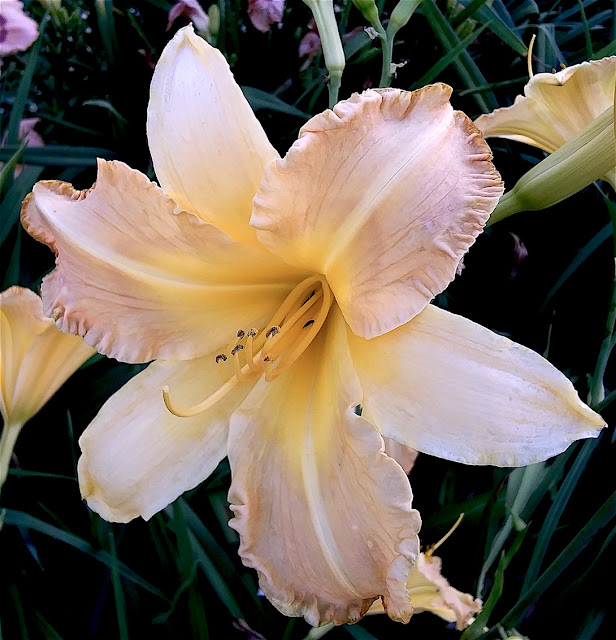