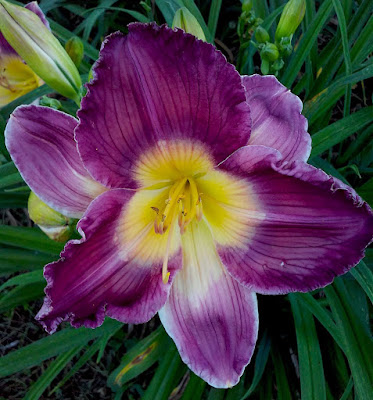 Flat flower, purple with darker eye above green throat. Eye is a series of rings going from the green throat turning chartreuse to reddish to lavender and ending in a dark purple ring. Eye often shows broken patterns.

Kaleidoscopic Evidence is so named to honor its two beautiful parents, and because it was the first piece of evidence I was able to produce in my own breeding program that you could combine the flat flower with rich, clear coloring, a patterned eye, cold hardiness and extremely high rust resistance. I was so excited by this one from the first flower it produced as a two-year seedling in 2013. It had come through the first year of my rust resistance screening with an A+ rating before I saw its first flower, and remained so through every other year of my screening program. I will be posting quite a few pictures of Kaleidoscopic Evidence, both from here in my garden and in other gardens where I have had it tested around the continent, as well as some of its seedlings from my program, below on this page. 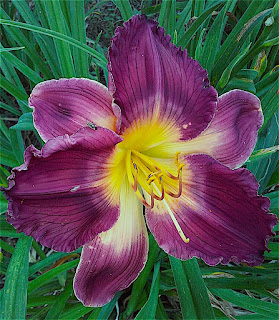 For my program, the only drawback with Kaleidoscopic Evidence is that it has evergreen foliage, and though it is very hardy here (I have never lost a fan in even the most severe polar vortex winters), the foliage can get considerable damage in my garden from late spring freezes. Yet, it still produces its first round of scapes even after the harshest freezes and I have never had it not flower in the early season. So in spite of the freeze susceptibility in spring, it is still an excellent plant and has so many good traits, I couldn't not breed from it or introduce it. It is a great breeder for any zone, but will be a standout for breeding its many good traits into warm-winter programs in the southern part of the country, especially in light if its extremely high rust resistance and high breeding value for the trait. The two pictures below show the plant with flowers, to demonstrate how it looks after a spring with a lot of freezes and a spring with nice weather having few or no freezes. 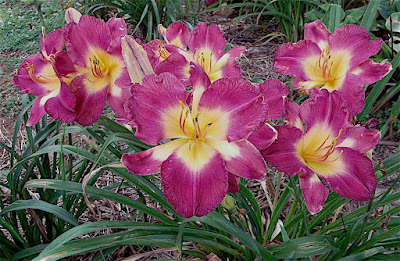 Spring 2015, after several severe late spring freezes. You can see damage at the tips of many of the leaves, but the flowering is still nice and plentiful. This was the first round of scapes for that year, followed later by rebloom scapes. 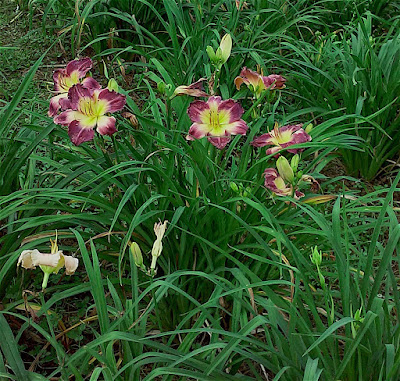 The foliage of Kaleidoscopic Evidence is an attractive dark green and the plant is hardy at least into zone 5 and flourishes into zone 9, as well as in the Pacific Northwest. I think this one will have broad application in many parts of the country and in many breeding programs. Its many fine traits means it has much to offer for breeding. Kaleidoscopic Evidence is very fertile both ways and has consistently set pods on almost every flower I have pollinated. Its seedlings are quite vigorous and cold hardy, regardless of the foliage type, and it can produce dormant seedlings. 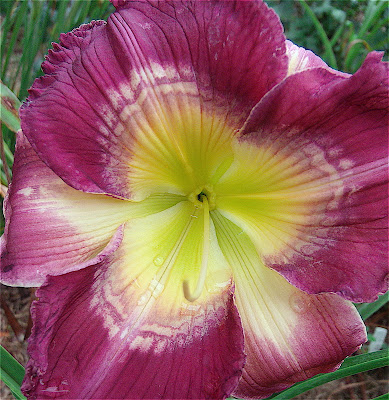 Kaleidoscopic Evidence always shows some level of patterning in the eye, but as you can see in the picture above, it can show incredible kaleidoscopic broken patterning at times. It passes its patterning to many of its offspring, and when bred into other lines with eye patterning, you can see these broken kaleidoscopic eyes that are sometimes more consistent than in Kaleidoscopic Evidence. The picture below shows a slightly more subtle eye pattern, but the one that I actually like the best, with the navy-bluish line very defined and jagged. I have gotten a good few seedlings that consistently show this jagged, linear pattern in the eye and I have been so taken with this look that it has ended up being the pattern I have selected toward the most from this line. 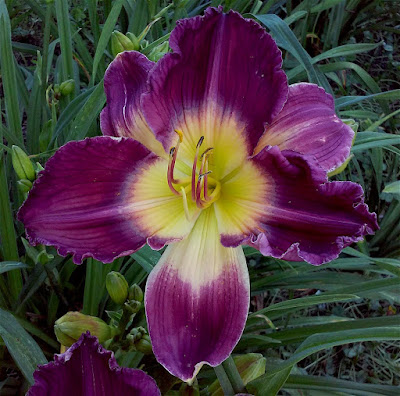 Kaleidoscopic Evidence shows excellent sun and rain resistance, along with moderate resistance to thrips. It has also shown rebloom here every year. Some years it shows instant rebloom, while other years it shows later summer rebloom, but it hasn't shown both every year in my garden. These fine traits, along with its extremely high rust resistance, all show up in a good number of its seedlings, and some show several or all of them together in individual seedlings, which, to me, is a very important aspect of breeding - pyramiding good traits to create lines that are very homozygous for a high number of very desirable traits (and thus show high breeding value for many of those traits). 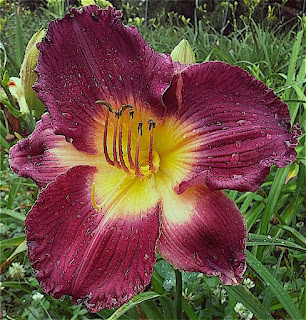 The great flower traits don't just end with the traits I mentioned in the paragraph above, though. The flowers are consistently very flat and very open, and they show excellent, thick substance. The color is a very clear grape-purple, some days more bluish-purple and some days more wine-purple. Most importantly, it shows excellent breeding value for its many lovely visual flower traits, as well as the traits in the paragraph above. 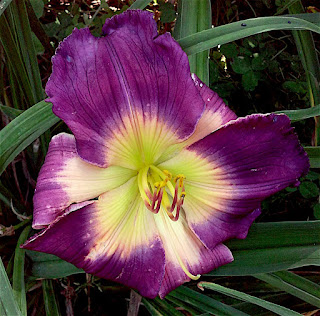 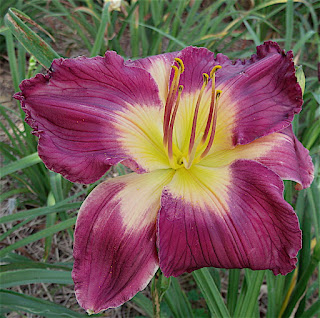 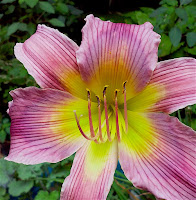 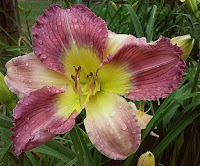 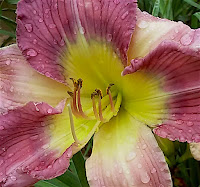 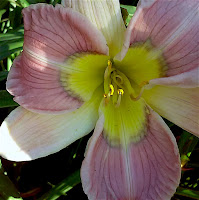 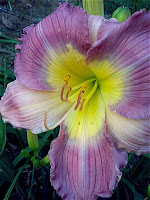 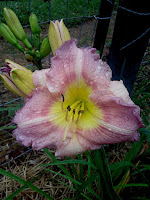 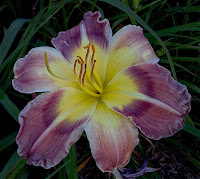 As I mentioned in one of the paragraphs at the top of the page, I have tested Kaleidoscopic Evidence in several gardens in different parts of the country. I have been pleased to receive very good reviews of its performance in those diverse environments. This bodes well for its potential, both as a breeder and as a garden plant. The furthest it has been grown in the north so far is zone 5 Ohio, where it has been grown in an exposed garden without high inputs and has done well. Here is what my friend who tried it in zone 5 had to say about it. "The Substantial Evidence x Kaleidoscope Intrigue seedling is a modern face and it’s nice because of the rich color and pattern. It has been rock hardy. I think it will be popular." 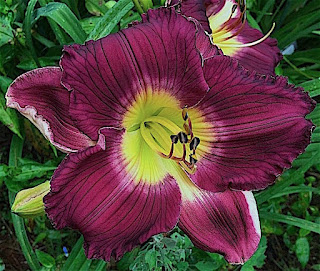 A picture of Kaleidoscopic Evidence growing in zone 5 Ohio

The furthest south I have had Kaleidoscopic Evidence tested is in zone 9 Texas. It has done extremely well there, and because it doesn't suffer from frequent late spring freezes that far south, it shows extremely beautiful foliage there and a long bloom season. 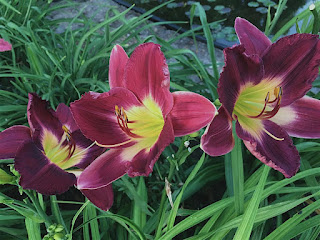 I have also had Kaleidoscopic Evidence tested in the Pacific Northwest, where it has done very well, and the flowers open well there, and consistently, even after the frequent cold nights (it also opens well here after cold nights, which is why I wanted it trialed in the PNW). Again, because of the low frequency of late spring freezes, it consistently shows lovely foliage in that environment. 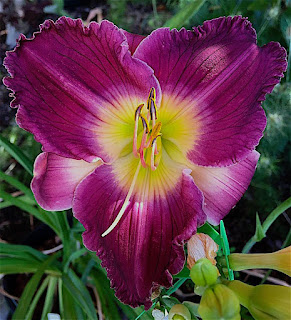 Kaleidoscopic Evidence in the Pacific Northwest