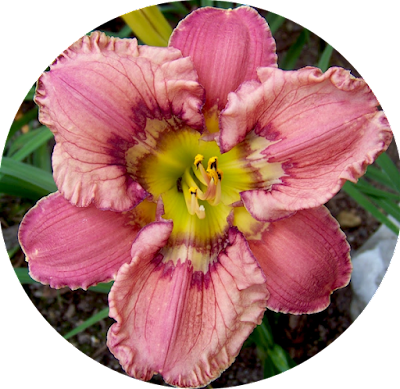 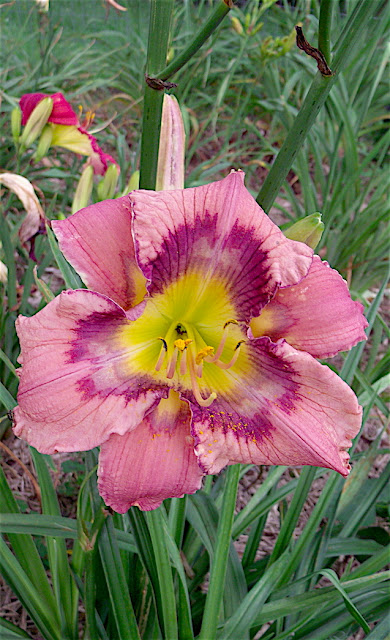 This incredible plant is from seeds I bought off the Lily Auction in 2010.  From the first flower, I have suspected it would be an introduction. While it only shows moderate rust and thrip resistance, it is a great grower, a hardy semi-evergreen and an excellent breeder, and the flower is very interesting. I haven't personally seen or grown anything like it, except for some of its seedlings. The patterned eye is variable, but there is almost always some pattern, even if rather faint and it repeats in the sepals. Most days sees a nice amount of broken pattern in the eye and the pattern really goes crazy in cool weather. In hot weather you still see pattern, but in very hot weather, it will loose most of the pattern. The throat is an extremely saturated green color and holds that color throughout the day very well and passes that throat on to many of its seedlings. The plant has attractive dark green foliage and it is a consistent rebloomer here in my garden, sometimes producing two rounds of rebloom scapes, and many of its seedlings also show this reblooming trait. 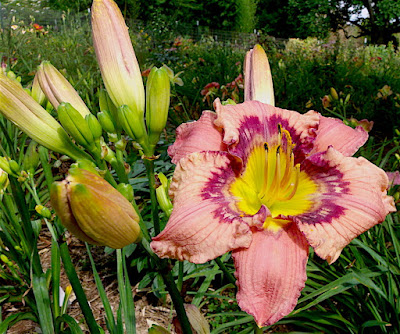 A 'fantasia' is defined as (1) a musical composition with a free form and often an improvisatory style, (2) a work (such as a poem or play) in which the author's fancy roves unrestricted, or (3) something possessing grotesque, bizarre, or unreal qualities. It originates from Greek and in Greek is a girl's name meaning 'imagination'. The changing face certainly strikes my imagination and makes me think of the flowing, changing melodies of a musical fantasia. Its pattern also reminds me of the complicated embroidery of Elizabethan needlepoint, often seen on women's gowns of the era. The color of the flower varies depending on where I grow it. In my mother's pH-neutral garden it combines very clear, bright pink tones. In my more acidic hybridizing garden, it goes to lavender tones. The pattern seems to behave the same in both gardens. The plant is very pod and pollen fertile and I have produced some seedlings from it that show dormancy. The rust resistance was extremely strong in 2012 (A+), less so in 2013 (A) and slightly less through the other three years of testing (A-/B+). The five-year average is an A, but I personally rank it as a B+, which is closer to the last three years I observed it. I have produced some extremely resistant seedlings from it when I combined it with Stare Master and with Whale Tails. There is a good bud count, and on an established clump, I have seen as many as twenty-two buds per scape. 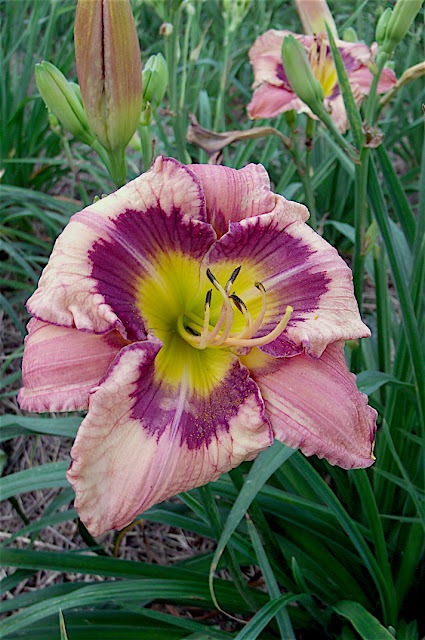 The picture above shows a warm-weather flower with less pattern. The thrip resistance is moderately high, but in a heavily thrip infested garden, after a spring with many damaging late freezes or both, there can be some thrip damage. I have produced seedlings though with significantly more thrip resistance when I crossed it with Solaris Symmetry. The semi-evergreen plant is hardy here and the plant has never shown any significant fan loss or crown damage from even the most severe winters. The foliage will show damage from late spring freezes, but it doesn't kill the plant. I suspect it will survive in colder climates than mine, especially where there is significant winter snow cover, and I know it will thrive in warmer-winter climates, as I have had it tested in warmer climates and it performs better there than it does for me. 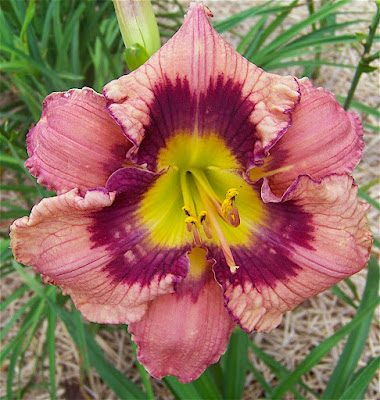 The form of the flower is very nice and the flower is consistently a good opener and the flower is almost always very flat. There is very little canoeing in its flowers. The reverse bitone coloring really makes the flower pop and the colors show up nicely in the garden with the green throat really standing out. 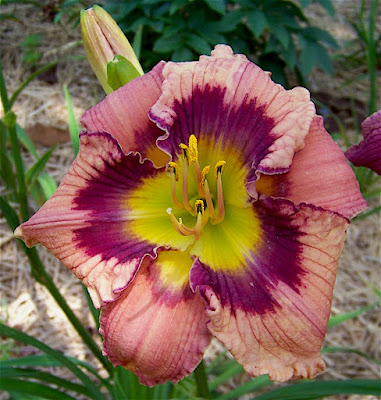 This is the flower with no broken pattern, though it still qualifies as a pattern by the AHS definition. Even if this were the way it always looked, it would still be an introduction because it is extremely attractive and has been such a good garden plant and breeder.

The slide below shows some of Elizabethan Fantasia's seedlings. 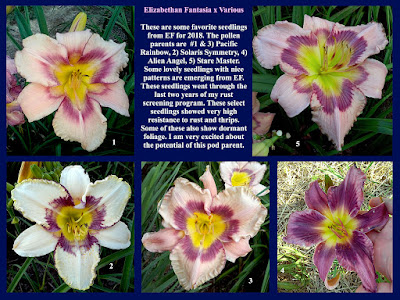 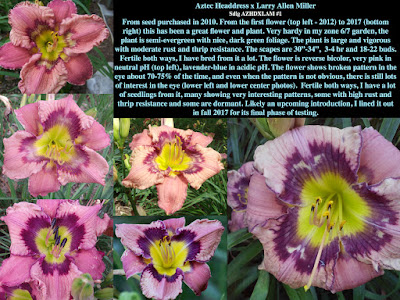 The slide above, from my 2018 Monday Night Lights presentation on Facebook, gives some more insight on this plants.
(click slide for larger image)

I have added multiple pictures below to show the plant at different times of day and in different parts of the season. 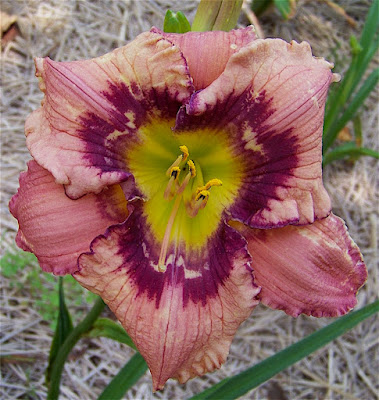 Here we see a flower showing interesting pattern on the petals, along with the pattern on the sepals. This is a bloom from the first round of scapes and you can see some thrip damage, if you look closely. While it is present, you can see that it isn't severe. 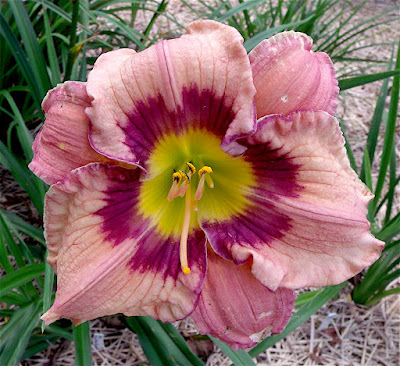 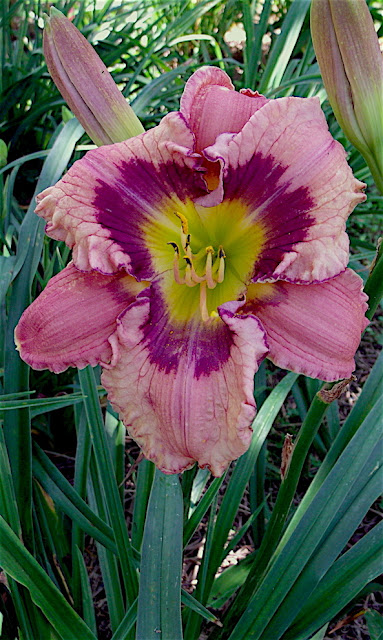 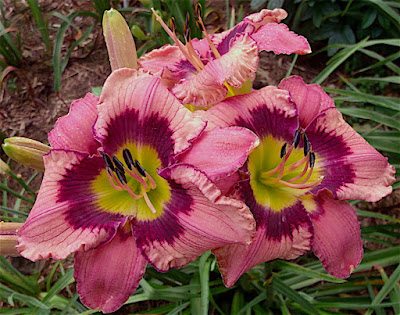 The three pictures above are of the flowers on a low pattern days in late summer, but note how strong the green throat is in these picture (and in all the ones above) regardless of the season in which the flowers occur, or the time of day. Even on this day though, there is slight patterning in the eye. 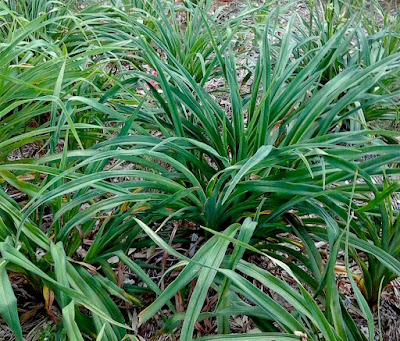 Here is a picture of the plant in spring before the first scapes have appeared. The color is a nice, dark green and looks good in the garden. The plant is a fast increaser that recovers well from division, clumping-up quickly. 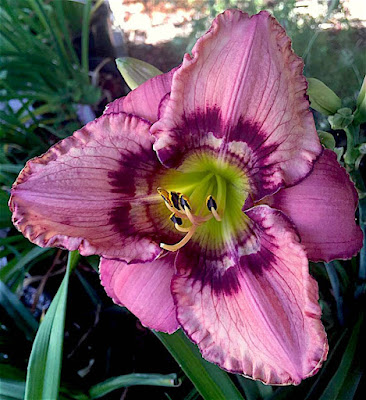 The pictures above and below are from Rita Mallon who has been testing this plant for me in her Oregon garden, which is in a warmer winter climate than I grow in. A big concern in the Pacific Northwest is whether a daylily will open well after the frequent cool nights they experience in summer. Rita says that this one has opened well for her and it gave a good display for her in 2018. I just sent her a tiny little division in 2017 (I wanted to see if it could survive) and it had grown enough to flower for her in 2018. As you can see, the pattern shows well in her climate and the eye is significant darker than I usually see it, but the throat is just as green (if not more so) and the pattern looks very good. Thanks for giving this one a trial-run, Rita!! :-) 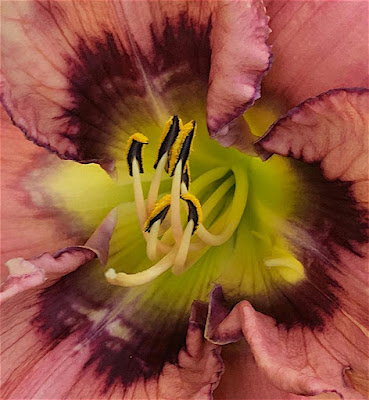