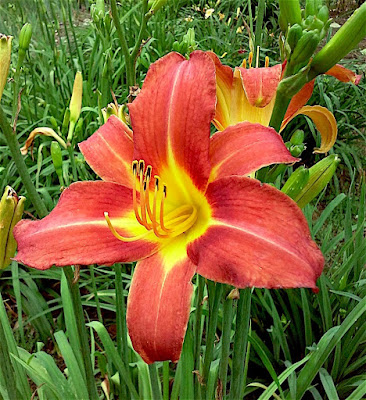 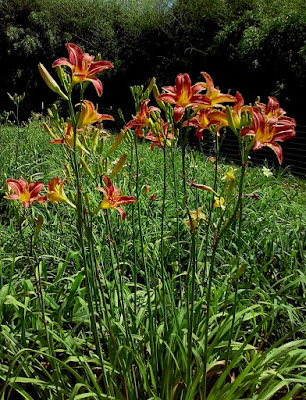 In Greek mythology, Eos is a Titan and the goddess of the dawn. I thought it was an appropriate name for several reasons. This cultivar is the earliest flowering tetraploid I grow, flowering in the range of Stella De Oro. It is also an early morning opener and opens well on cool mornings, starting both the season and each day with beautiful, bright sunrise-red flowers. The plant is large with tall scapes, making it a titan of a daylily. It showed extremely strong rust resistance through all five years of my rust screening, making it a five-year tested A+, and it shows very high thrip resistance, which is exceptional for these early-early flowering plants in my garden. The plant also shows excellent resistance to late spring freezes. In my garden, early-early cultivars are notoriously problematic, both for thrips and late freezes. Early-early types frequently show scapes much shorter than the registered height, extensive bud drop and thrip damage, and some just have their scapes dry up and fall over. This cultivar though is notable here for rarely doing any of this, only showing slight damage to foliage from late freezes, but never reduced scape height. While thrips will cause some enations on the outside of the bud, the flower itself holds up without heavy spotting or damage. Finally, it is extremely fertile both ways and is the mother of many seedlings in my program. 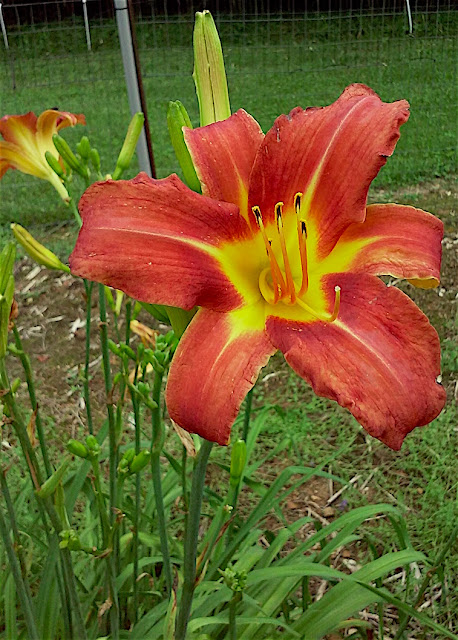 A seedling from my 2011 breeding season, Eos At Dawn has a very interesting parentage, bringing a host of new genetics into the hybrid tetraploid population. Both of the parents are species/species-like base plants in my program. It combines the best of both parents and actually advances several of their best traits, flowering earlier than both parents, with even better late-freeze, rust and thrip resistance. 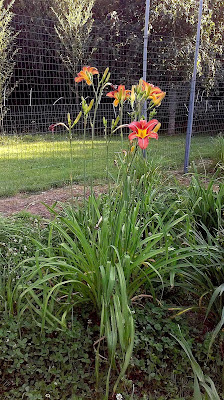 The plant shows attractive foliage of a medium green tone and tall scapes averaging around five and a half feet. The branches average between four to five on mature fans within mature clumps. The new divisions and young fans will tend to have shorter scapes at around four feet and with two to three branches. For an early-early cultivar, its resistance to various problems, bright color and great performance make it a stand-out in the garden. The foliage is senescent and shows dormancy in my garden. The plant has been very hardy, never showing any serious damage from harsh winters or late spring freezes. It is this plant that is responsible for me deciding to go ahead and pursue and early flowering tetraploid program. 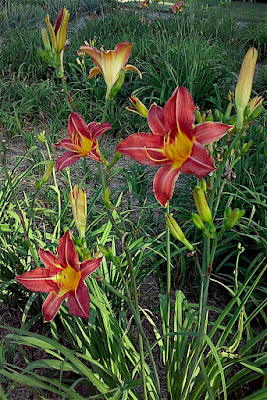 In addition to its excellent plant traits, Eos At Dawn is also an excellent parent. Very fertile both ways, it is an excellent tool in improving early-early tetraploid lines. It shows very good breeding value for both its high rust and thrips resistance, as well as its tolerance to late spring freezes, and it passes its large plant and tall scapes on to many of its seedlings. Below are some if its seedlings in my program.
2022 Update
This year I have the first two introductions deriving from Eos At Dawn. 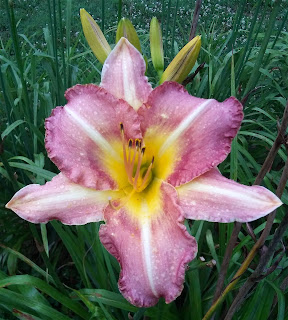 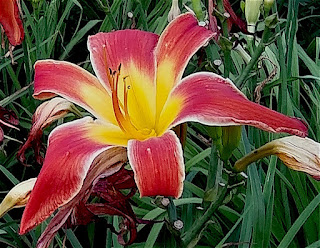 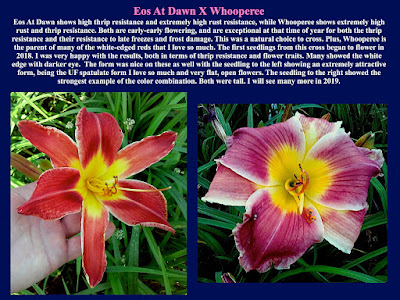 The two seedlings above are from crosses of Eos At Dawn with Whooperee, which is only slightly later flowering that Eos and shows equally high rust resistance with even higher thrip resistance. The results of that cross were phenomenal for resistance to the problems seen in so many of the early cultivars. The flowers show a lot of interest as well, demonstrating that Eos can produce seedlings with more advanced flower traits than it shows. The seedling below is from Eos crossed to Pacific Rainbow. It too is an excellent plant and flower, showing the potential that Eos has for use in early programs with colors beyond red. As of 2022 this seedling is the introduction Astraea. 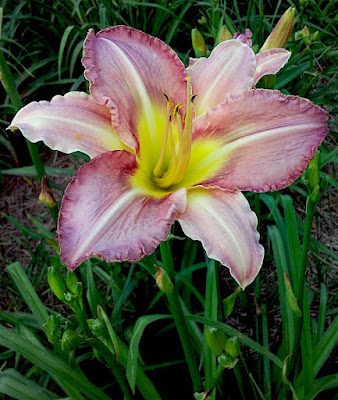 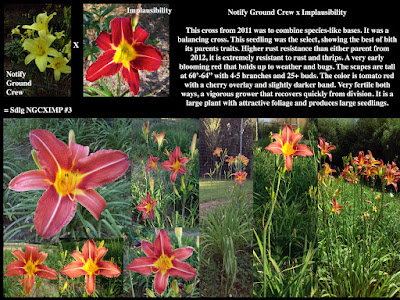 The image above is from my 2018 Monday Night Lights presentation on Facebook (click for larger image). It gives some information about the plant when it was a simple seedling. The bud count mentioned in the image is for the upper end of established clumps. I registered it as less to reflect the average bud count.

The images below show the cultivar over the years in the garden, from 2013 through 2018. It is an impressive display and I think it has a big future for improving early flowering lines for use in cold-weather climates, as well as improving rust resistance in such lines. 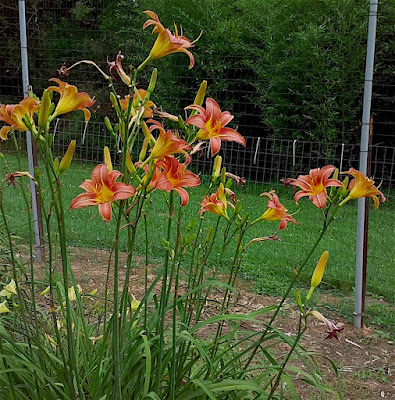 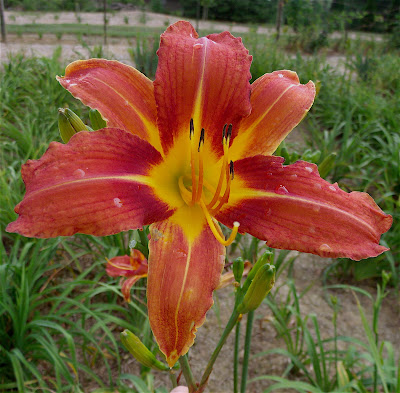 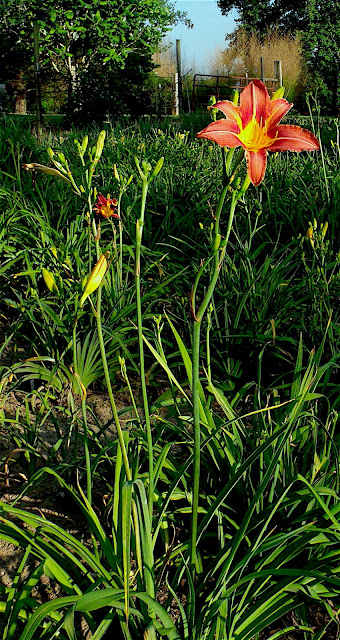 Here you can see the wonderful branching on the scapes. 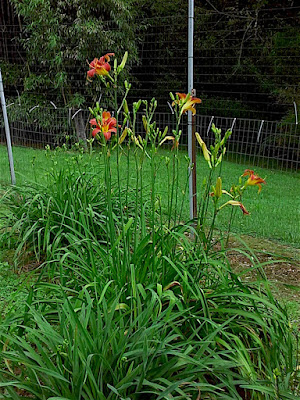 As an example of how early it is, here you can see that Eos is the only cultivar in bloom in my hybridizing garden. 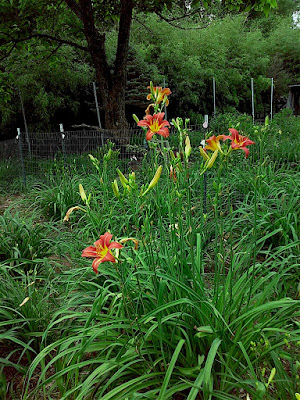 And here it is from the opposite view again showing that nothing else is yet blooming in my hybridizing garden while Eos has already started her show.