Korean Mothers Of Pink and Purple 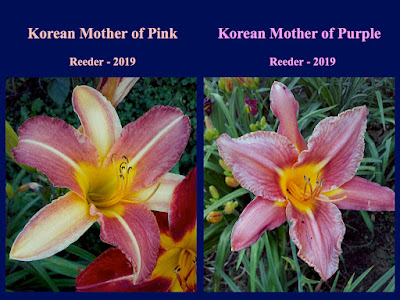 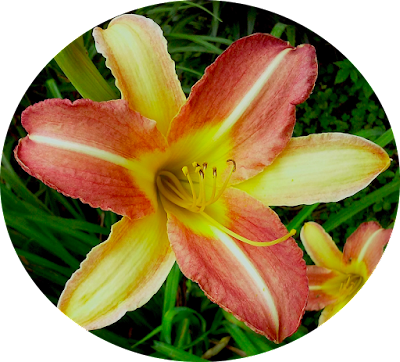 I am listing these two introductions on one page because they are full siblings and much of what applies to one applies to the other. Both are first generation backcrosses of the modern tetraploid cultivar Papa Smurf as pollen parent onto the H. fulva 'Korean' clone imported by Darrel Apps and Barry Yinger in 1984, as pod parent. This fulva clone is a very fertile pod parent with pollen from tetraploid cultivars, and flow cytometry suggests it is a triploid. I registered both of these cultivars as tetraploids because I made repeated attempts to use their pollen on a wide range of diploids with no seed set, and conversely used dip pollen in these from multiple diploids, only to never get a seed. This strongly suggests to me that they are tetraploids. They are both pod and pollen fertile only with tetraploids in my experience. Both show good fertility both ways in my garden. 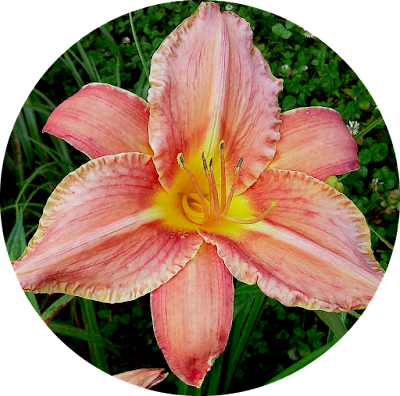 H. fulva 'Korean' is extremely rust resistant, in fact one of the most resistant and most consistently resistant daylilies I have ever seen, and I have reports of it maintaining that extreme resistance (really immunity) in many very rusty locations in the southern-tier states. It also shows extremely high breeding value for rust resistance, consistently producing a high percentage of extremely resistant seedlings. However, many people may be afraid to work with it as it is a fulva and so is rhizomatous. While I find that it can be easily contained in a large planter or by planting it in an area where it can be mowed around, I do understand why people might be reluctant to grow it, especially if they have a small garden. That is one of the reasons I have felt it important to introduce the best of the first generation seedlings I have made with H. f. 'Korean'. In that way, I can get these great genetics out to other breeders to use in their programs. These two are especially interesting, and I think, will offer much breeding value to many programs in warmer, rust-zone areas. 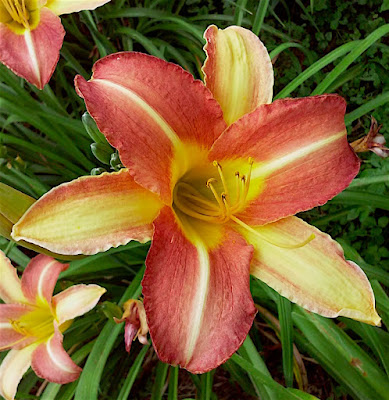 For me, the most interesting thing has been how well these two seedlings combine with pink and purple. KMOPink has a bit more of a pink overlay, producing some really impressive pink seedlings, while KMOPurple has a lavender overlay and produces some excellent purple seedlings. I am very surprised by how well the pink and purple tones come back out in the F2. I honestly didn't expect that! I thought for sure it would be a couple of generations to restore the color, but I would note that H. f. 'Korean' is an extremely clean colored orange, not showing the rustier orange tones of H. fulva 'Europa'. 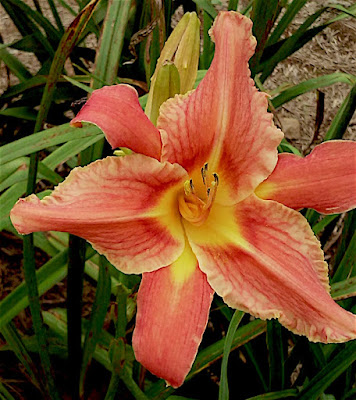 The rust resistance of both seedlings has been extremely high through all five years of my rust screening program (consistent A+ score all five years), and they both produce a significant number of extremely resistant seedlings. For me (in my program and garden) the only drawback is that both of these are semi-evergreens that emerge quickly in the spring and do not show strong tolerance to late spring freezes, making them just a little too tender for my taste, and where I am planning to take my program in the future. However, this trait suggests to me that they will be very useful for people with breeding programs in warm-winter climates, and is a major reason I am introducing them - to get them down south where rust is a real problem and all their good traits (extreme rust resistance, high breeding value for rust resistance, infusion of species genetics, ability to produce very clear colored pink or purple seedlings) can be very useful for warm-winter breeding programs. I would point out though that these are both very hardy here and I have never seen either loose any fans due to winter damage, but they always get hit here by those late spring freezes. I think they will live and maybe even thrive further north, especially where there is significant snow cover throughout the winter and spring arrives late.
Updated 2022
Seedlings from both Korean Mother Of Pink and Korean Mother Of Purple from the 2020 and 2021 flower seasons. These are two selects I have been testing for several years now and I think they both beautifully illustrate how far you can go in one generation when either KMOPink and KMOPurple are backcrossed to pink and purple cultivars. While not every seedling in such a backcross will show the great plant traits coming from H. fulva Korean, a good percentage do, and these two shown below are two examples of seedlings that have shown the high vigor with interesting and beautiful flowers. 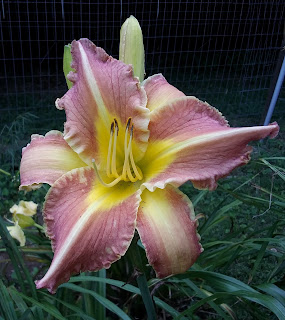 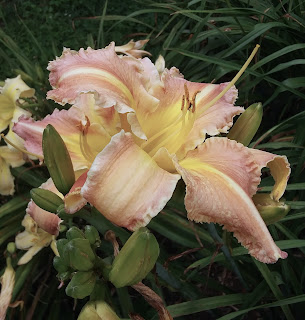 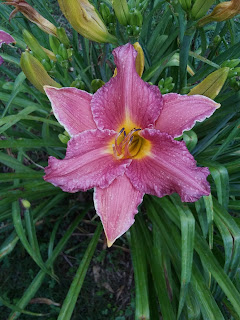 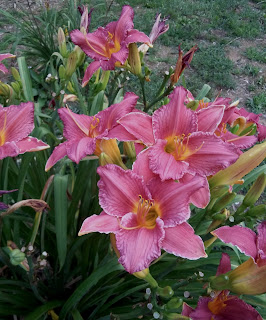 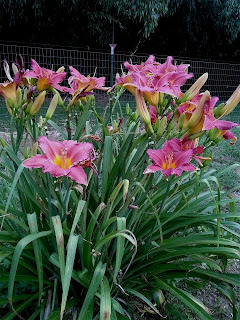 Korean Mother Of Purple x Elizabethan Minerva
To give you some idea of the clear colored seedlings these can produce, and the high breeding value they offer in rust resistance breeding because of that ability, here are two slides from my 2018 Monday Night Lights presentation on Facebook. 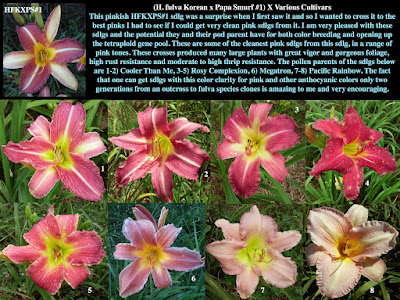 The slide above shows some seedlings from Korean Mother of Pink. These were far more nicely colored than I would have ever expected and were a truly wonderful surprise!
(click on slide for larger image) 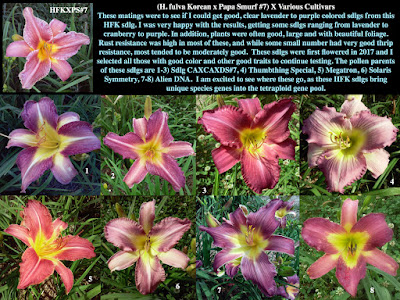 The slide above shows some seedlings from Korean Mother of Purple. These seedlings were an even bigger surprise than those from KMOPink. I have found that H. f. 'Korean' seems to work better in the F1 with pink than it does with purple, so to get seedlings with such clear purple color suggests to me that "pink genes" may be more dominant on the 'Korean' background than are "purple genes", but that both types of genes are easily retrieved in the second generation (F2). 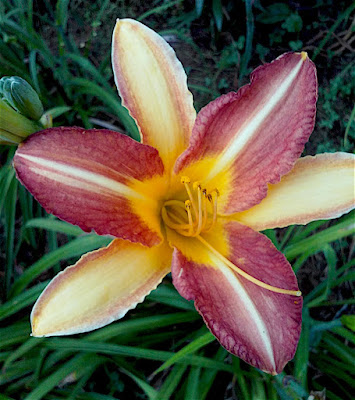 One concern I have heard is that these F1 seedlings from H. fulva 'Korean' is that they will be rhizomatous and so wildly invasive like H. f. 'Europa' (the common ditch lily). I have now grown these since the 2012 season and I have not seen strong rhizomatous behavior. The do show mild rhizomatous behavior, but so far I have never seen the runners go further than a few inches from the main clump, and the plants do form a clump. I suspect these might be more rhizomatous in very light, fertile soil, as my soil is heavy clay and not extremely fertile. If this is a concern, grow these in large planters or plant them where they are mowed around to stop any unwanted spread, or just dig out any fans that go out further than you want. In breeding with these, I see about half the seedlings with no apparent rhizomatous growth and about half with the same slight rhizomatous growth as KMOPink and KMOPurple, so it is possible to move away from the rhizomatous growth gene(s) in later generations. 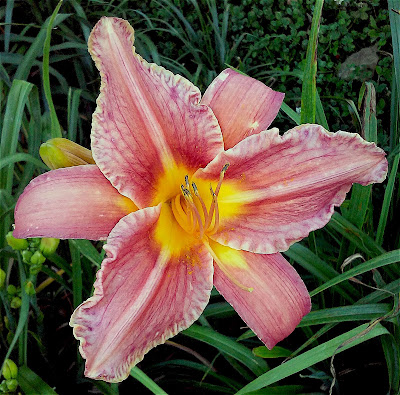 The bud counts can be higher than I registered them on established clumps. The scape-to-fan ratio is good. The thrip resistance of H. f. 'Korean' is only moderate, and that is the same in some of its seedlings. Neither of these two introductions are seriously susceptible to thrips, but they will show some slight damage, especially in a dry spring with heavy thrips infestations. If there have been a lot of damaging late spring freezes, the damage can be even worse. Generally though, these hold up well and the many good traits make these worth working with, especially for warm-climate rust resistance. 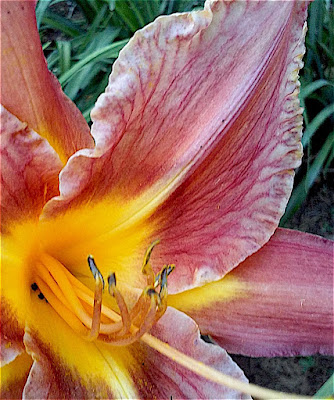 Closeup on eye and lighter edge of KMOPurple