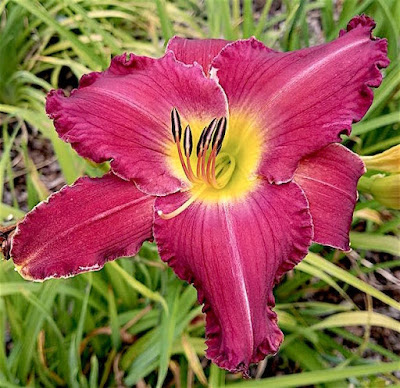 Tyrian purple leaning toward magenta, variable in intensity, with a grape band above a green to chartreuse throat.

Elizabethan Minerva - The Roman goddess of wisdom and peace, and associated with the royal color Tyrian purple, Minerva was another mythical figure adopted as a symbol of Elizabeth Tudor to represent her wisdom and the long peace England had experienced under her reign. Minerva is the Roman equivalent of the Greek goddess Pallas Athena. With her gorgeous purple flowers, her high fertility both ways, her high rust resistance, good branching and semi-evergreen foliage, I believe Elizabethan Minerva will be an important breeding plant for southern breeders seeking to breed for rust resistance and modern flowers with great scapes. 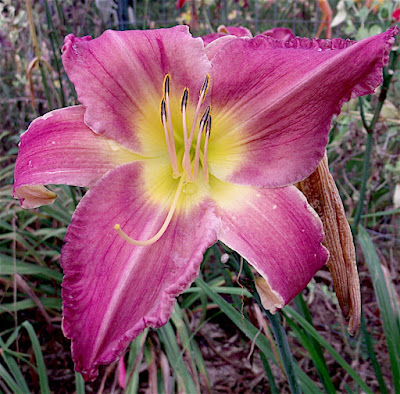 Image from 2014 as a three year old seedling, and the first year I saw flowers
From the first flower, I was excited by Elizabethan Minerva. Hybridized in 2011 and germinated in 2012, I didn't see the first flowers until 2014, when the plant was two years old. But boy was I excited when that first flower opened! The seedling had already gone through rust testing in 2012 and 2013, so by 2014 I was fairly sure the plant was going to show consistent resistance to rust, but I did not expect such a nicely colored, bright flower. When it showed instant rebloom and then late summer rebloom that year, while carrying loads of pods on the earlier scapes, I was over the moon. 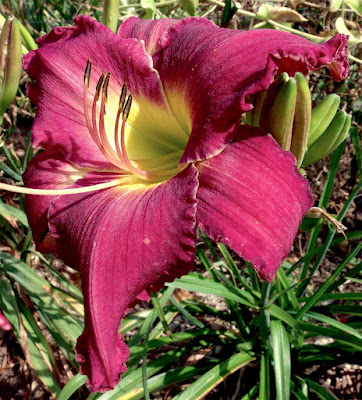 2014 hybridizing garden
The color is very hard to capture and often comes out exaggerated in pictures. I have slightly dulled the colors in all the pictures I am using here to take off the exaggeration caused by lighting and photography. Elizabethan Minerva is always bright and vibrant in the garden, but I didn't want to post pictures here that are deceptively bright, so I preferred slightly duller than in real life to overly-exaggerated colors. Below is the original, untouched version of this picture above, to show the comparison. It is brighter than the flower is in real life, where in real life it is a bright, vibrant color without looking artificial, which I have never caught accurately on film. Robert Anderson's pictures come as close to the real-life flower of any I have seen. 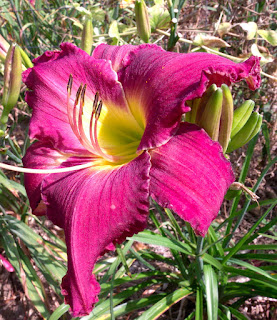 The color of Elizabethan Minerva is extremely bright and is variable. Some days there is a darker band on the petals, other days, the flower is deeply saturated and appears to be a self colored magenta to purple. The color can vary from a fluorescent magenta to a deeper medium purple tone. The bright color was so exciting because this seedling was the first one I produced that had both extremely high rust resistance and a bright, modern flower with great branching. The discovery of its super pod fertility was an added bonus. The color falls within the range of Tyrian purple, because 'Tyrian purple' was not just one tone or shade, but a group of tones and shades within the same color. The particular tone you got with Tyrian purple depended on how long the cloth was left in the dye, and cloth that had been dyed and then re-dyed multiple times would have a much darker tone, appearing richer and more "purple" than those that had been dipped fewer times in the dyed. The lighter shades of Tyrian purple were more what people would call "magenta" or "dark pink" today. 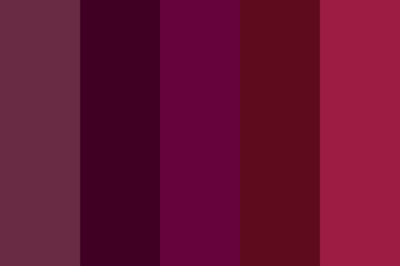 Various tones that could be achieved in ancient times through the use of the dye called "Tyrian purple", made from the crushed shells of the Murex snail. No matter the particular tone or shade that Elizabethan Minerva shows on a given day, it always falls within this range.
The plant of Elizabethan Minerva is a hardy semi-evergreen, though it does show just a touch more late spring freeze susceptibility than I like. However, it is still extremely hardy and I have never seen it lose fans or die out in the center of the plant due to even our harshest winters or latest hard freezes in spring. It has also lived well in the deep south in gardens where I have sent it for testing. The rust resistance was A+ through all five years of my rust screening, and the plant is very fertile both ways. I have produced tons of seedlings with Elizabethan Minerva as pod parent, and she is an excellent breeder for multiple traits, passing rust resistance to a very high percentage of seedlings, along with good branching, hardiness to cold, and bright, vibrant colors. 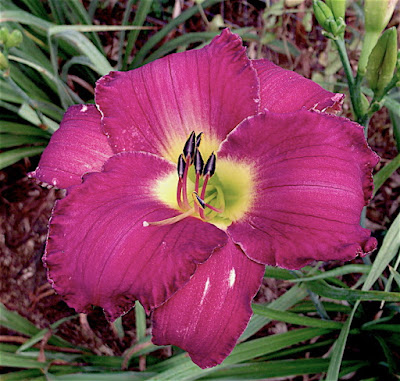 2014 hybridizing garden
The thrips resistance of Elizabethan Minerva is only moderate, and it does produce some spotting and enations in periods of heavy thrip infestation, so to keep the flower perfect, you may need to spray for thrips, if they are a problem in your garden. However, it can breed seedlings with much better thrips resistance when bred to partners with higher resistance (such as Solaris Symmetry). As I never spray for thrips in order to test for resistance to the pests, all of the pictures I have taken that are include here show Elizabethan Minerva in high thrips setting and unsprayed. 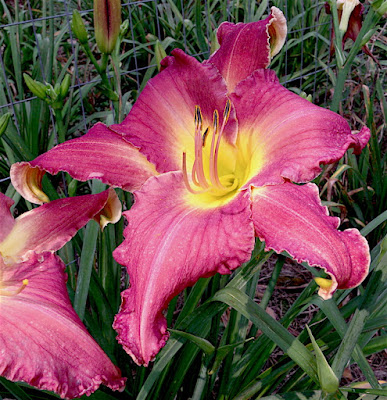 2015 hybridizing garden
The flower of Elizabethan Minerva is a wild-looking open form that can also vary from day to day. In its seedlings there is an interesting range of forms from wild, open forms to unusual forms, as well as rounder forms. I think that Elizabethan Minerva will offer a great deal to any garden, but especially for breeders who want to increase rust resistance in their programs while keeping the bright, modern colors. Because pollen parent Dimensional Shift has a bevy of fancy edge/eye/pattern types in its ancestry, you can see some fancy edges and occasional patterns amongst the seedlings of Elizabethan Minerva. 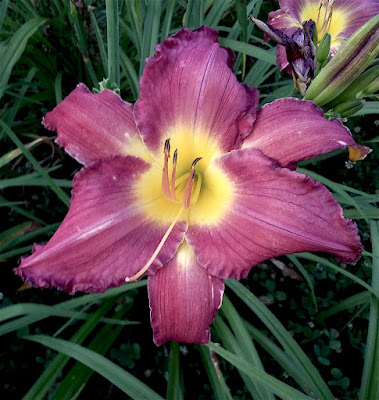 2020 line out garden at sunset
Another nice feature is that the flower doesn't melt during the day and is still attractive by the end of the day. There is also good resistance to rain. In extremely hard rain, you will see some spotting, but in most rain, you don't, as you can see in the picture below. 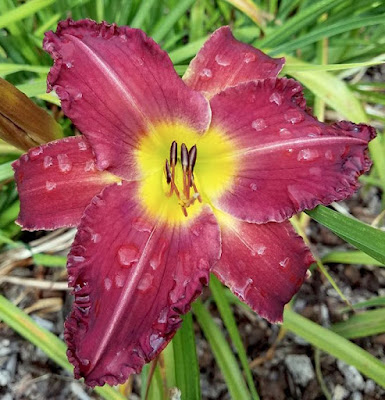 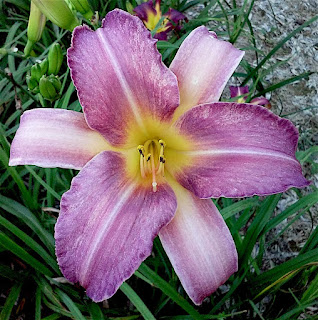 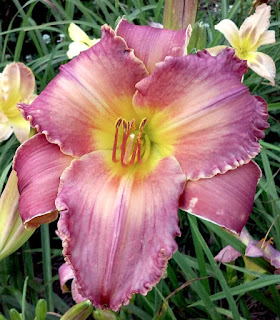 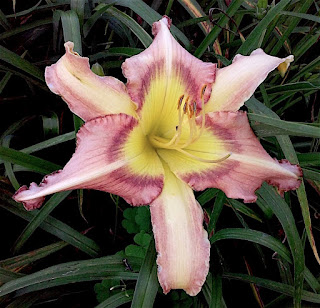 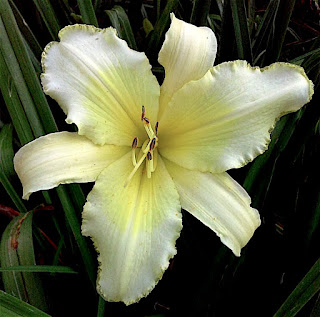 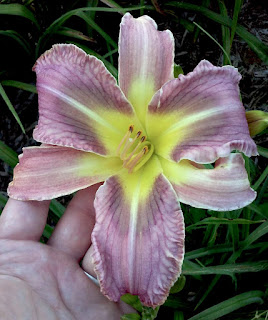 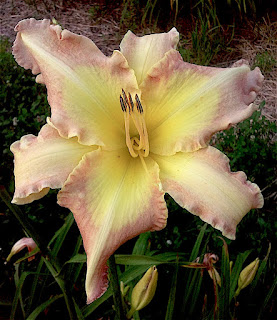 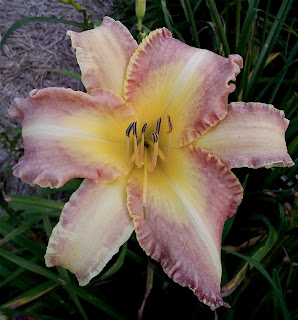 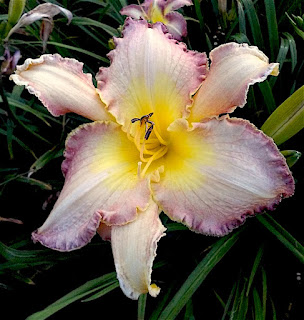 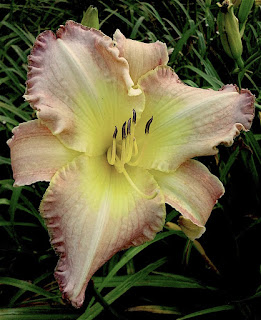 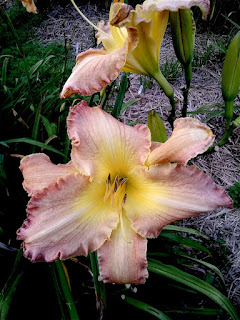 Elizabethan Minerva x (Sherry Lane Carr x Tetra Substantial Evidence)
sdlg 1
With great breeding potential, producing beautiful seedlings with strong vigor, hardiness, rust resistance, great scapes and good rebloom, Elizabethan Minerva is as regal as her namesakes, Elizabeth Tudor, Gloriana of England's Golden Age, and the goddess Minerva, one of the three Capitoline deities of Rome and the goddess of wisdom and strategic warfare, arts, trade, and strategy. Elizabethan Minerva will provide beauty in your garden and will upgrade your breeding program for rust resistance and beautiful clear color. Hardy in the cold-winter northern states, it also flourishes in warm-winter southern garden where its combination of semi-evergreen foliage and excellent breeding value will be a big boon to rust resistance breeding efforts. 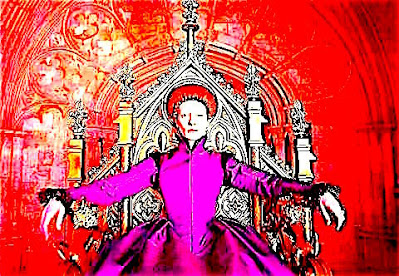 In Elizabethan England, sumptuary laws forbade the wearing of purple by all but the queen herself. Because Minerva was associated with the color purple and the Tyrian purple dye from which it was made in ancient times, this was another association between Elizabeth and Minerva. 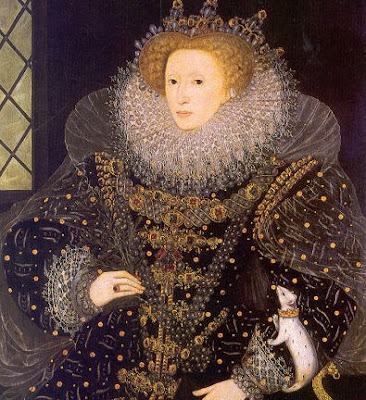 Scans of this portrait of Elizabeth Tudor show that the pigment used in painting the gown was originally a deep, dark purple, now appearing more black or mahogany to the eye due to aging.