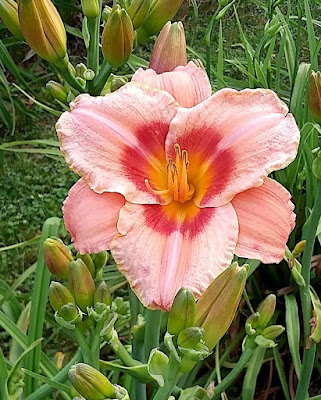 Argus was the hundred-eyed giant who guarded Io in Greek mythology. In the Elizabethan court, Queen Elizabeth adopted many symbols to represent her power. One of those was eyes embroidered on her garments, and you can see this in such paintings as the famous 'Rainbow Portrait'. This symbol was used to imply that Elizabeth (or more correctly, her spies) saw all that was going on in her realm. And when Elizabethan Argus is in flower, it too is covered in eyes and is keeping watch throughout the garden. 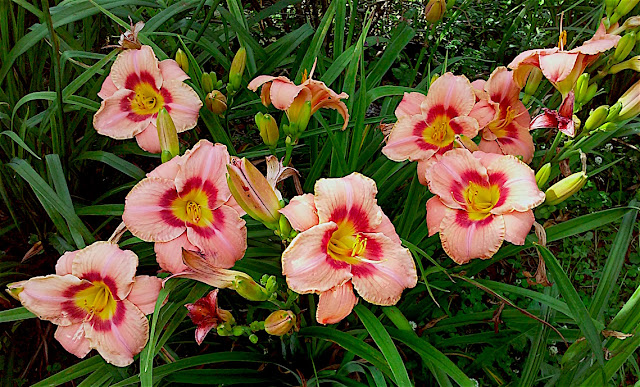 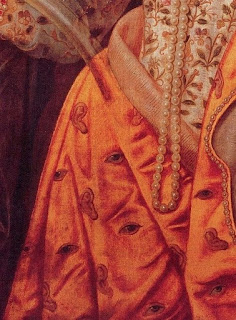 A lovely peach-pink with a peach edge and a big bold eye in cerise-red that shines from a distance. Elizabethan Argus was hybridized in the summer of 2011 and germinated that year. It went through all five years of my rust resistance screening, scoring A+ in each year, and it has produced a good number of rust resistant seedlings in my seedling beds. It also shows very good thrips resistance, with good breeding value for that trait. The foliage is beautiful, green and healthy, but it is the branching that really makes it a standout! 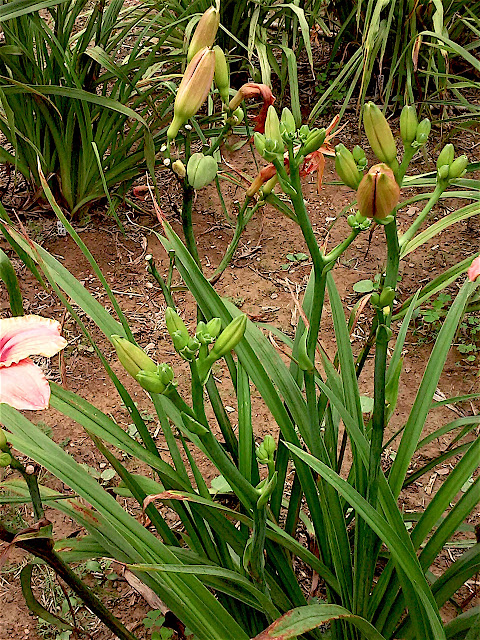 The branching averages five branches, though I have seen up to seven on the occasional scape. The bud count averages 25, but I have seen up to thirty-two on some of the rare scapes with seven branches. As if that were not enough, as you can see in the picture above, Elizabethan Argus shows instant rebloom, creating a long bloom season. I have also seen occasional late summer/early fall rebloom. 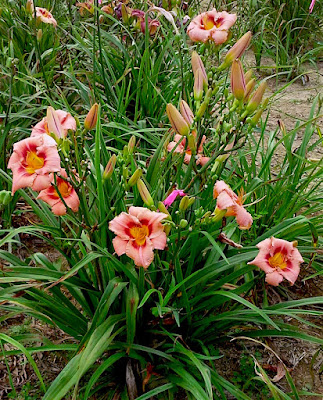 Seedling bed 2015, showing the marvelous performance that Elizabethan Argus has shown from the first year it bloomed 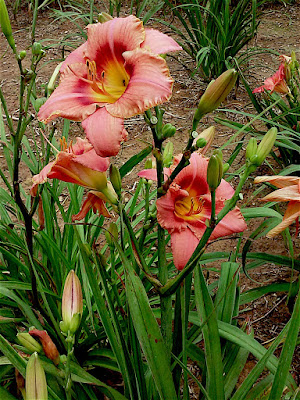 The above picture from the seedling bed in 2015 shows the beautiful peach edge on the lovely peach-pink petals, as well as the great branching
The flowering starts in midseason and lasts for several weeks. The foliage is dormant, but shows no summer dormancy and stays green and attractive until the first hard freeze of the winter, when it dies back and goes fully dormant for the winter. It is also not an early riser, and doesn't tend to emerge during every warm spell that lasts for a few days during the winter. 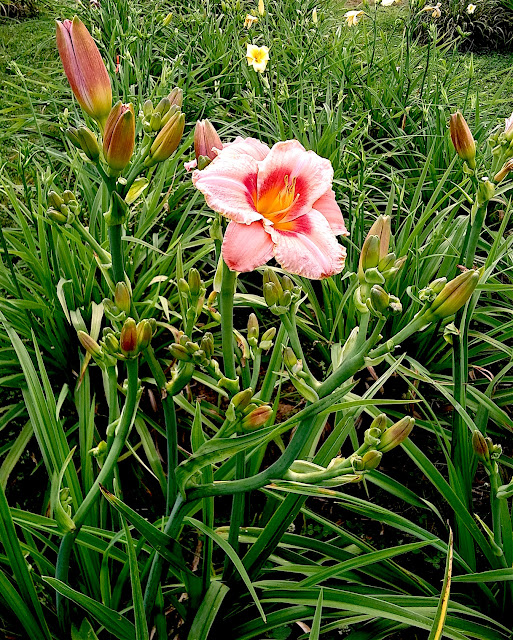 Stunning in the line out garden in summer of 2020

The fertility is very good for both pod and pollen. Elizabethan Argus is a great parent too. In addition to producing a high percentage of rust and thrip resistant seedlings, it also produces a wide range of bright colors, and an interesting range of forms, many with excellent branching. Below are four interesting seedlings from Elizabethan Argus that show some of the types of flowers, the interesting colors and forms, it has produced. 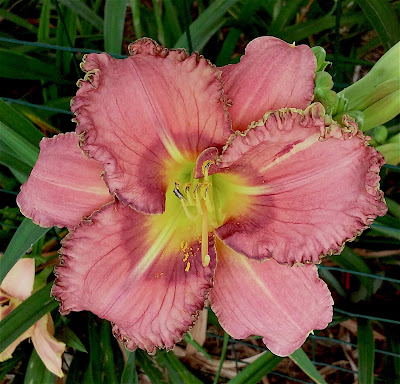 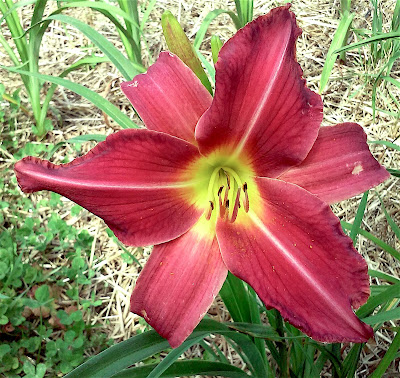 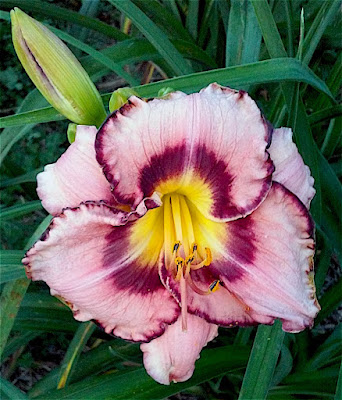 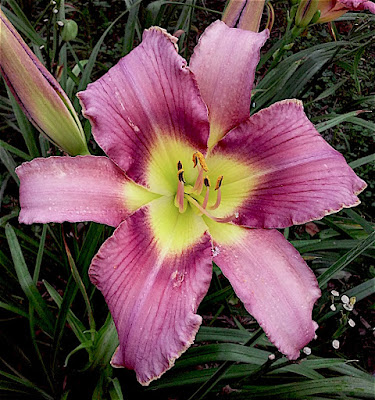 I believe that Elizabethan Argus is an important breeder for rust resistance and thrips resistance. In the past, one of the complaints about some of the plants that showed resistance was that they were either red or yellow in flower color or they showed poor branching. With my breeding work, a major focus has been to select plants with rust resistance that show and/or can produce a wide range of colors and that have excellent branching with beautiful plants. Elizabethan Argus definitely falls into that category. 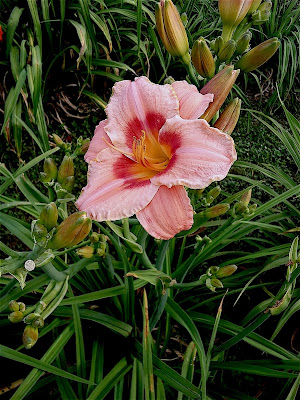 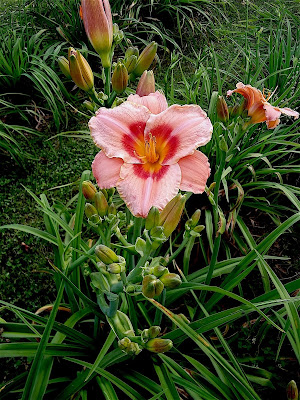 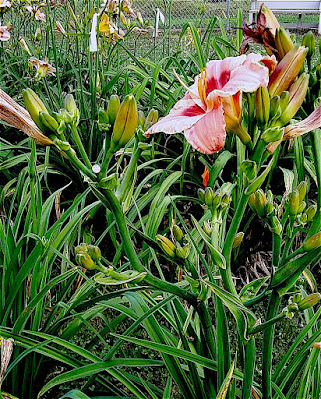