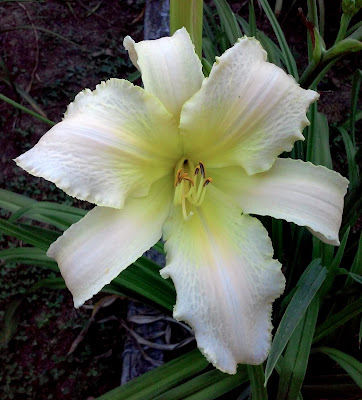 Cream with golden edge and palest pink blush along white midribs on petals and pink blush on sepals above a large green to chartreuse throat.

There was no greater status symbol amongst the Elizabethan nobility than a fine pair of gloves. These luxury items were often made from the finest leather and were richly decorated. One of the most interesting aspects of the use of these gloves as status symbols is that they often were not even worn on the hands, but were worn tucked in the belt where they could be seen. Queen Elizabeth was especially fond of white and cream colored gloves, and these were often given to her as gifts by courtiers jockeying for position at Christmas and her birthday. 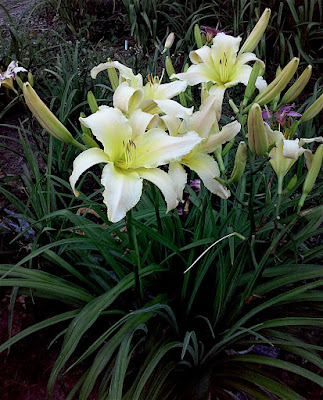 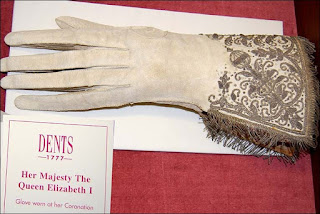 An original Elizabethan glove, showing the fine long fingers and pale creamy-white coloring
I chose this name for this flower for several reasons. The coloring is obvious, but the form is another reason, as Elizabeth Tudor famously had long, thin fingers of which she was very proud. Finally, this is one of the finest white-flowered daylily plants I have grown (though I do now have some seedlings that are as good or just slightly exceed it for plant qualities). 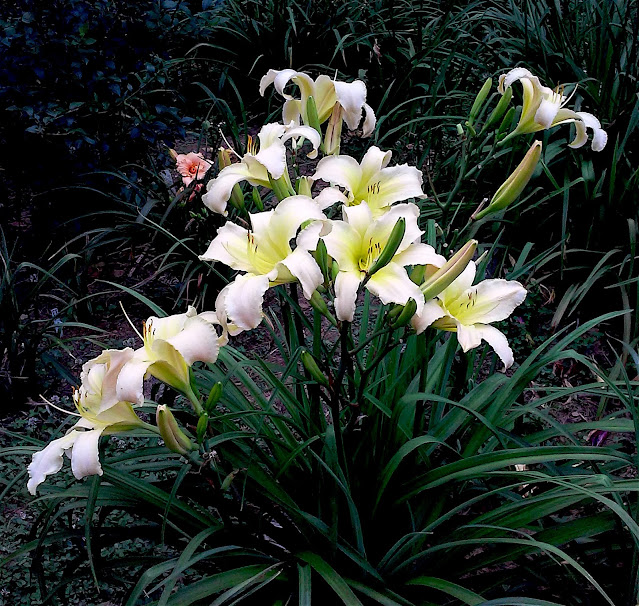 Elizabethan Fine Gloves is the finest white-flowered plant I have grown, now being exceeded only by some of my best near white seedlings. The foliage is gorgeous and the scapes are well-branched with a nice bud count that gives a long season of bloom. The plant is a very hardy semi-evergreen and the increase is good. 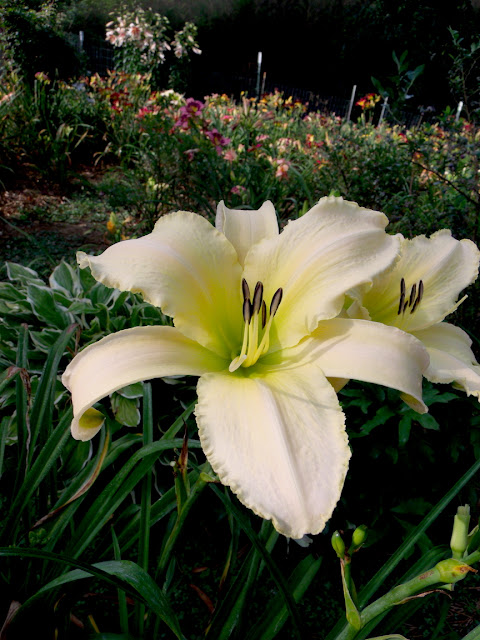 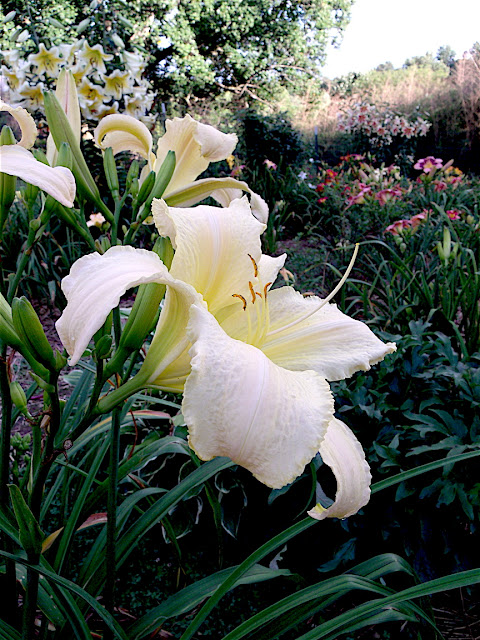 With Gram's Dream as the pod parent, Elizabethan Fine Gloves carries genetic factors for both teeth and pleating, and I have seen both traits appear in the seedlings. While the pollen fertility is very good, Elizabethan Fine Gloves is a difficult pod parent, though I have gotten pods through persistence. The flowers often show mild sculpting traits, and are quite structural, adding nice interest to the display. 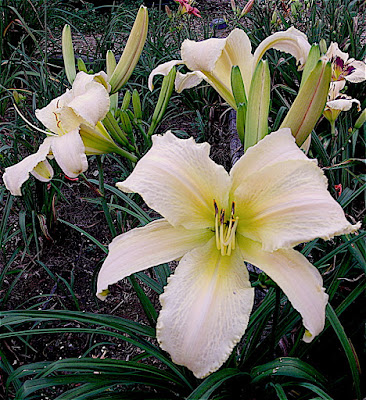 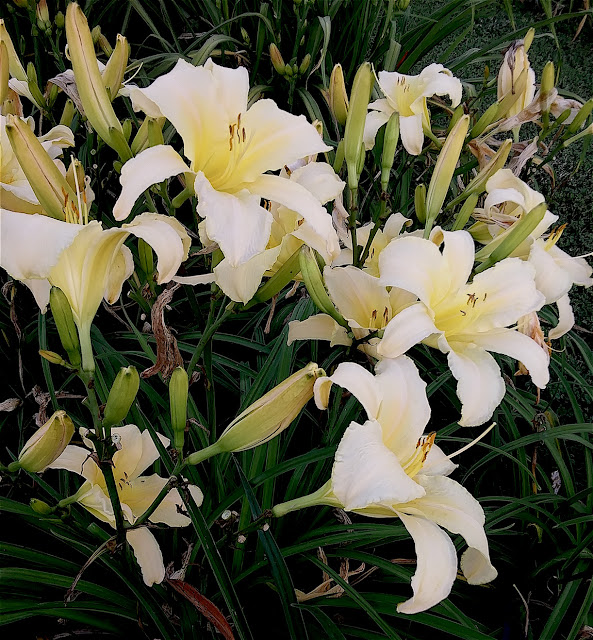 The flowers of Elizabethan Fine Gloves are large and striking in the garden, being a creamy near-white with a pink flush down the middle of the petals, and a considerable amount of green in the throat. The backs of the sepals also show an interesting green and brownish/purple coloring that adds interest to the flowers. 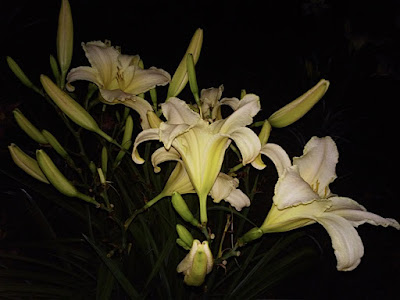 The flowers hold up very well in heat and sunlight, lasting quite late into the evening. Being an extended bloomer, the flowers open early in the morning and go on to give a nice display with good substance throughout the entire day and well after dark, giving Elizabethan Fine Gloves a nice benefit in gardens that are viewed after dark. The bright, light color and flowers that hold up well right into the dark mean the nighttime display is extremely nice. No melted or wilted flowers in this one by sunset! 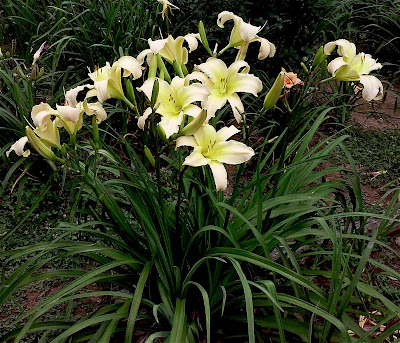 The combination of many fine features makes Elizabethan Fine Gloves a fine garden plant and a fine breeding plant. While the pod fertility has been difficult, and the rust resistant is only moderate, the fine plant makes it outstanding in the flower garden and in the breeding garden. While it can produce seedlings with higher rust resistance than it shows, it can also produce seedlings that show pod fertility, so these issues have not ruled it out as a breeder in my program, and I have gratefully benefited from using it. Below are several example of near white seedlings that I have produced from Elizabethan Fine Gloves. 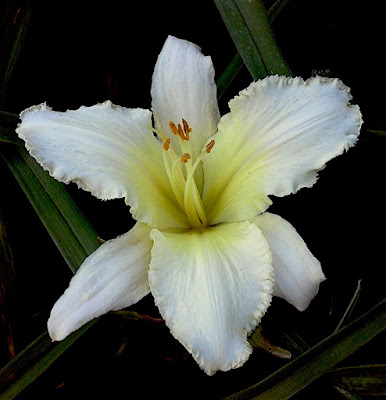 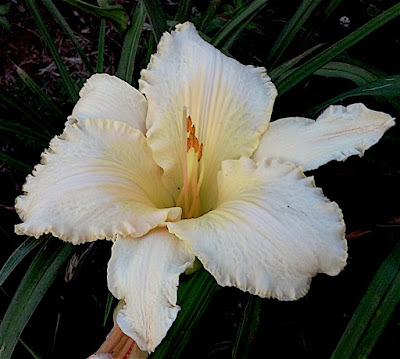 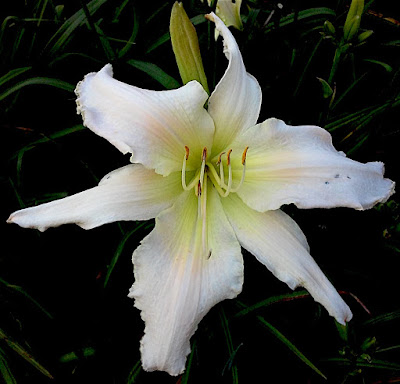 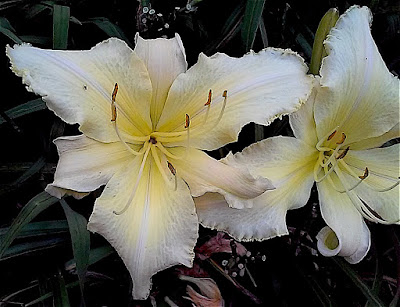 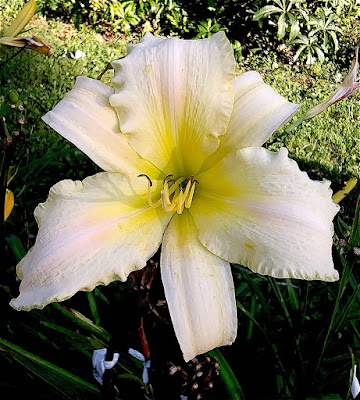 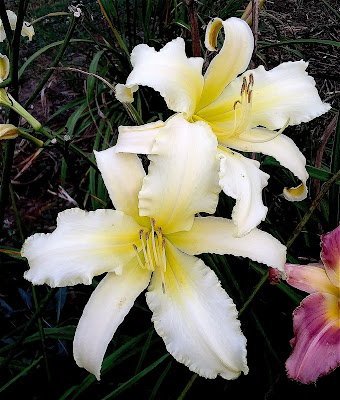 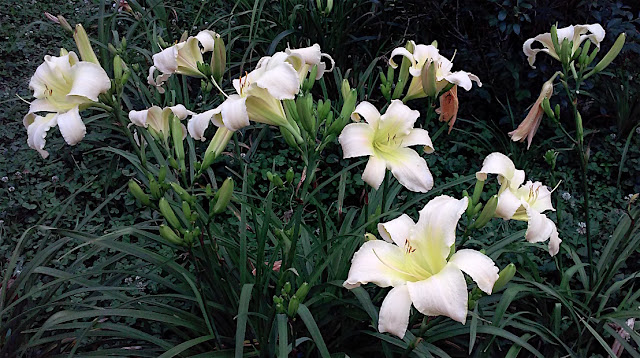