Far Above The World

Far Above The World 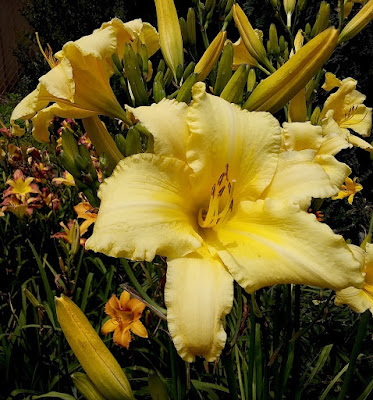 From the first flower, I was excited about the seedling that became Far Above The World. It is so much more than I had expected when I made the cross. The idea was that I would combine Notify Ground Crew with Great White to bring in color lightening genes with tall height. I expected something of moderate height and medium yellow coloring with very simply flowers. I was really shocked to get this tall, pale and modern looking flower in the first generation. My guess, at the beginning, was that it would take two or three generations to get to this point. How pleasant to be proved wrong! 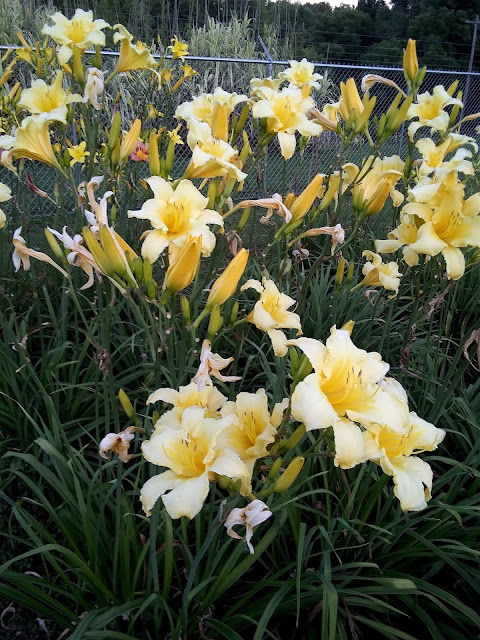 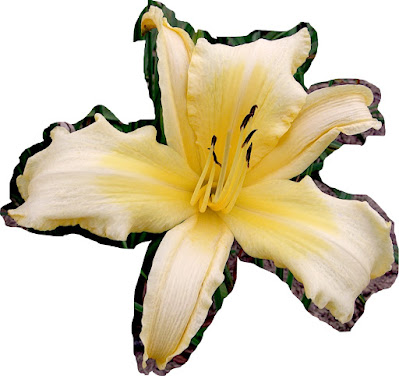 The first year seedling flower, above, was a bit more "unusual" than the flowers have settled on the mature plant, but I do occasionally see flowers with this kind of form and movement.
The scapes reached their mature height the second year the plant flowered, reaching heights above 60" that year. I am registering the scapes at 68", because that is the average height, and with 7 branches, because that is also the average number of branches. In every mature clump there will be a few scapes shorter than the average at around 60" - 65", and with 6 branches and 30 - 32 buds. However, in every mature clump there will also be scapes above the 68" average, some up to 74" and with as many as 8 - 9 branches and 40+ buds. A mature clump is truly a breathtaking sight! 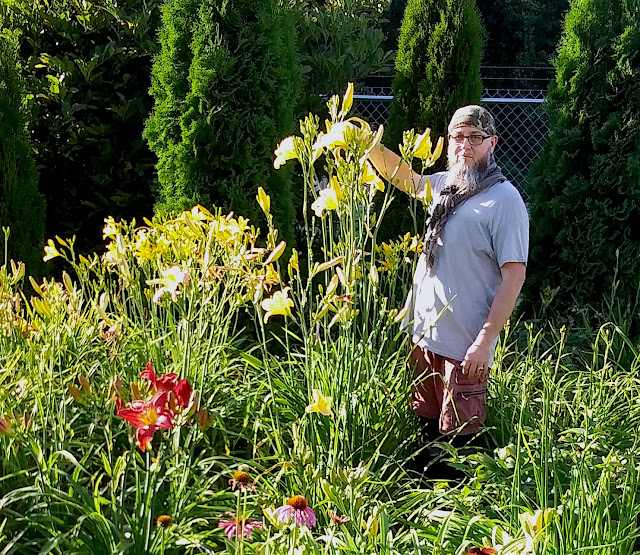 This is a picture of me with the mature clump of Far Above The World in my mother's garden. I am 5' 8" tall (68"), and you can clearly see that the tallest scapes are a few inches taller than I am, with some a bit shorter. The majority of daylilies show some variation in the range of the scapes in a mature clump, even though we pick one number to register.
The thrips resistance of Far Above The World is also very good, as is the rust resistance, and it shows good breeding value for both traits. The foliage is dormant, just slightly semi-evergreen here in warm winters, but I think anyone would consider this a dormant and register it as such. However, I also suspect that the plant will survive and likely flourish in warm-winter gardens because of the bit of above ground foliage I have seen in warm winters. In cold winters, the plant dies back completely and goes fully dormant. I have never seen summer dormancy, a trait I cull against vigorously. The clump remains intact for several years without requiring division, forming a large clump that does not die out in the middle and deteriorate, with scape to fan ratio declining. This allows the grower to leave Far Above The World in place for many years and form a truly imposing display. 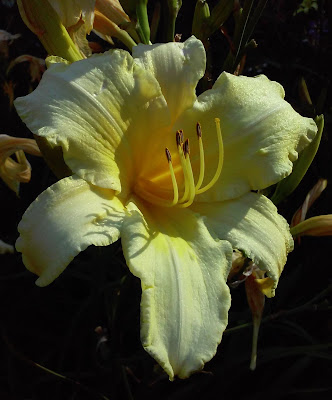 Midday, between the early morning and late evening coloring.

The flowers start the day a bright, light true yellow then fade through the day, finishing as a pale cream with golden throat. The effect is gorgeous - glowing like the sunrise in the morning, then like the bright sunlight at midday, and then cool with a sunset throat for evening. The flower is an extended bloomer, beginning to open after sunset, gradually opening through the whole night, fully open at sunrise and then lasting all through the day and on into the evening after dark. The flower is open over 24 hours. The substance is excellent and it is not damaged by sunlight, rain or high heat. 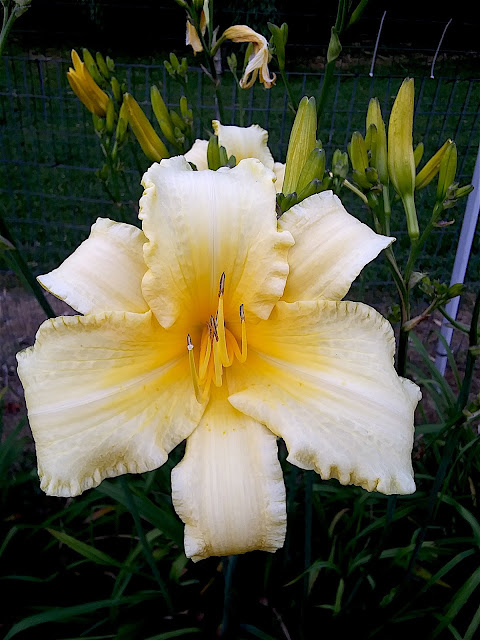 The color near sunset 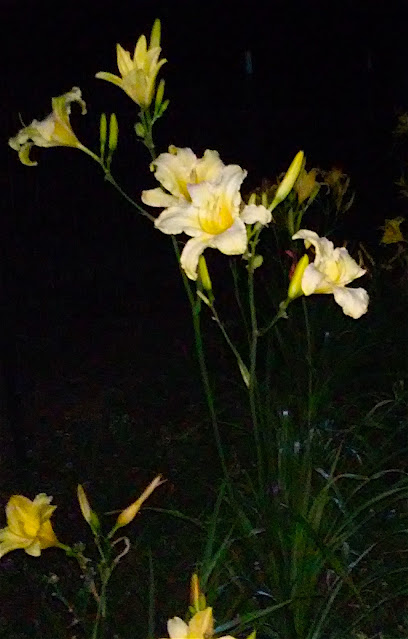 After sunset, near midnight. You can see the flowers from the day still open and intact, and at the top of the picture, the next day's flower in the process of opening. You can also see how the pale flowers reflect the light. It is glorious under moonlight.
The branches are not just numerous, but also widely spaced and carry the flowers at a nice spacing. This helps to create a beautiful display where the flowers are held beautifully and creates an effect where each flower is viewed individually, which is very nice, because with the high bud count, there are times when there are many flowers open at once on a mature clump. 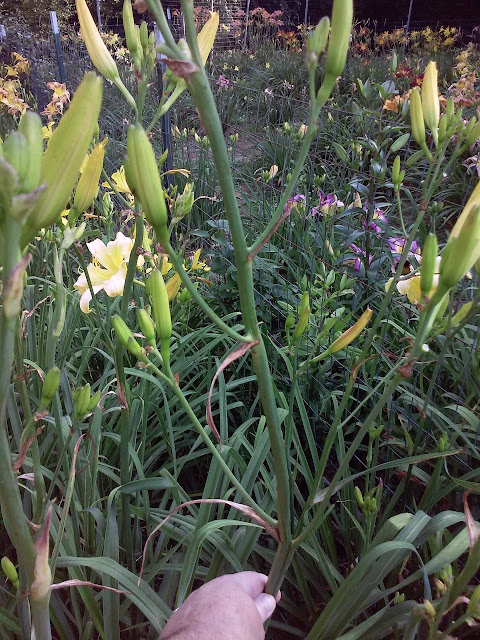 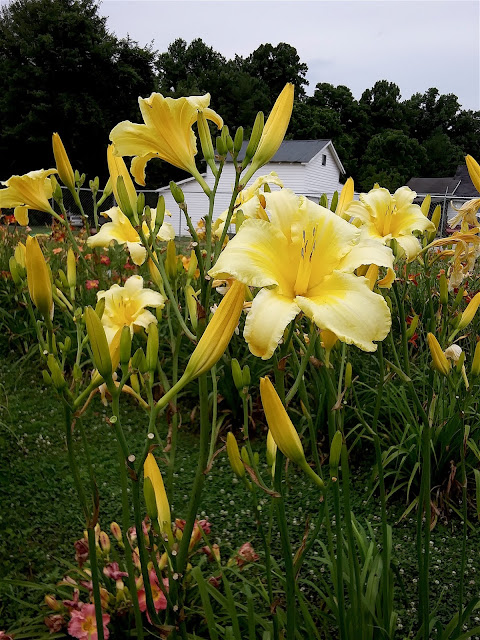 The fertility is very good both ways, with pollen being easier, but I have produced a good number of pods on Far Above The World every year, and have lots of seedlings with Far Above The World as pod parent to show for the effort. It is one of my main mother plants, and one I still breed from in the hybridizing garden every year. My experience is that the later flowers set better than the earlier ones. 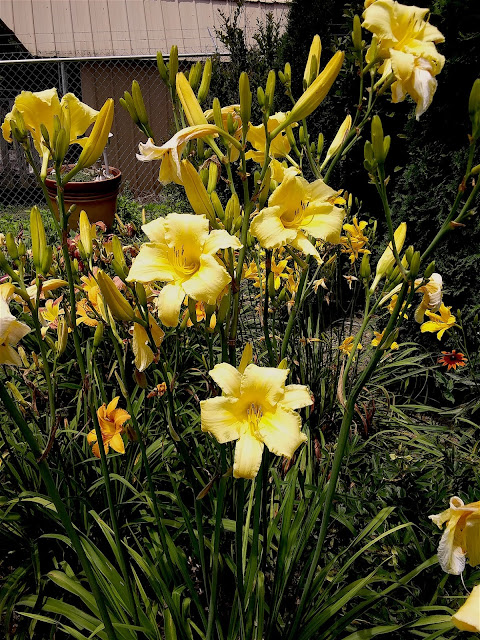 Because of the high bud count there is a long bloom season. Far Above The World starts in early-midseason, and then continues on blooming for a month or more. I have seen occasional rebloom, but not enough that I am including that in the registration. On the rare rebloom scapes, the pod fertility seems to be on par with the later flowers in the first round of scapes. I suspect the energy required to carry all those buds has an effect on the pod fertility of the earlier flowers, with the fertility improving as there are fewer buds to carry. Pod fertility tends to be very good in many of the seedlings. 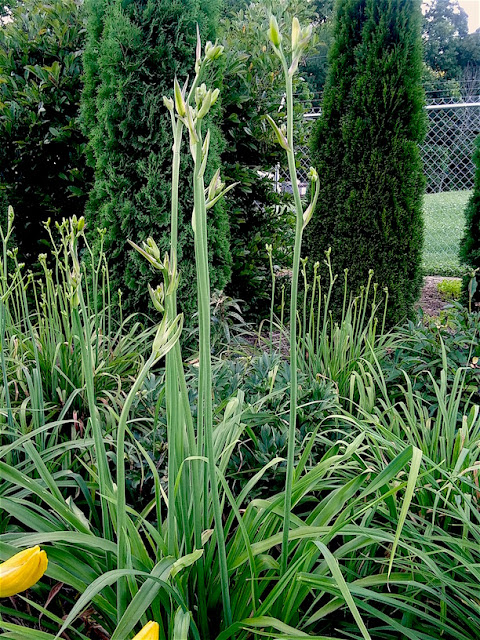 Scapes emerging in the early part of the season, attaining their height before the branches have started to grow out to their full length. 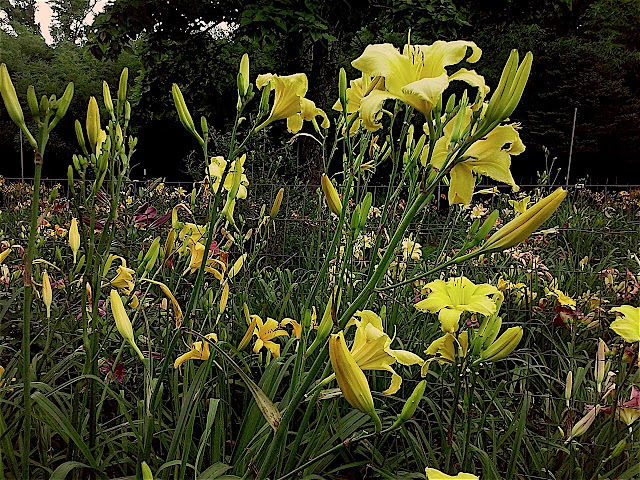 Far Above The World - early morning, glorious in the early summer, at the beginning of its bloom cycle in my hybridizing garden
With the yellow flower, one might just assume that Far Above The World is "just another yellow", but it is anything but that. I happen to love yellow flowered daylilies, so I have grown a lot of them and have a very good range of comparison as to what makes a good yellow daylily. So what sets one yellow apart from another? Well, with so many registered yellow daylilies, there are a number of things that can set one yellow apart from another. Vigor, rust resistance, thrips resistance, garden value, plants that persist for many years without requiring division or dying out in the center of the clump, great scapes with branching and bud count, flower form or style, and breeding value for any or all of these traits are all points I look for in a yellow daylily. When a yellow flowered daylily combines several of these points, that is truly something special, and is definitely not "just another yellow". Another point to consider is the ability of a yellow to breed colors other than yellow. Far Above The World has many of these traits. 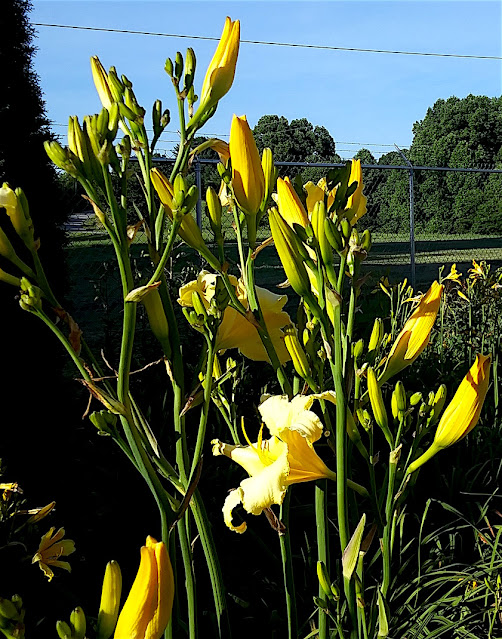 The final aspect of Far Above The World I want to touch on is the breeding ability. One might assume that "just another yellow" won't breed beautiful flowers in a range of anthocyanic tones, but Far Above The World, owing to Great White as pollen parent, is carrying genes that make the melon-based, near-white background coloring that allows for clean, clear anthocyanic colors in pastel tones of pink and lavender, as well as cream and melon tones. Not only are the seedlings showing attractive flowers, but they are also showing the large plants, tall scapes and nice branching and bud counts of Far Above The World. Below are a few of my favorites. 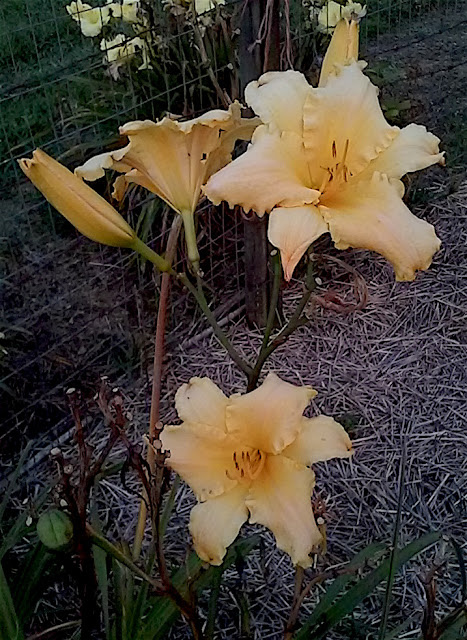 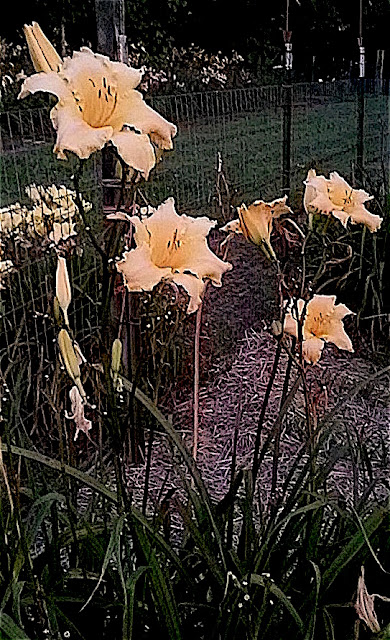 Far Above The World x sdlg, the seedling above is the one on the right. The one on the left demonstrates the height along with the melon coloring and branching 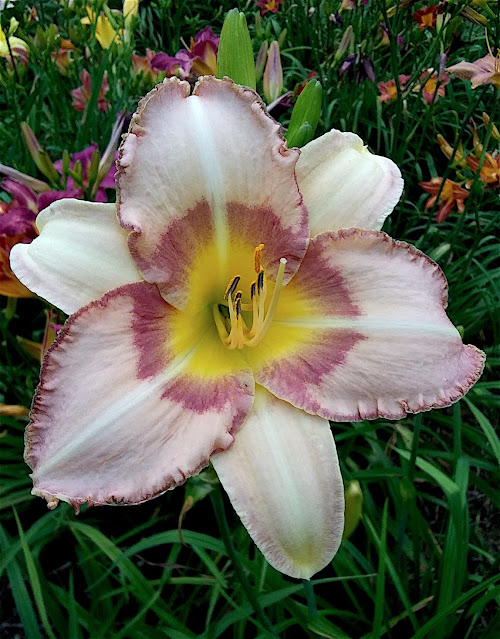 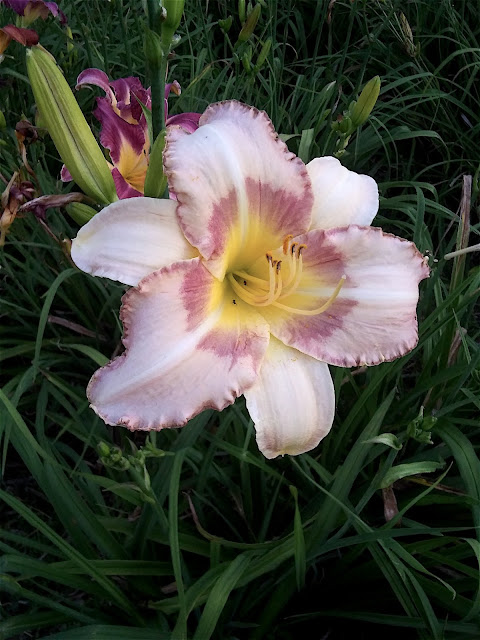 Far Above The World x Solaris Symmetry  - The same seedling  as above, showing the lovely form and beautiful coloring 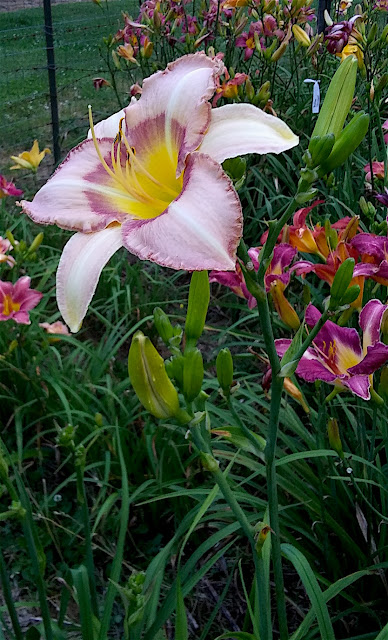 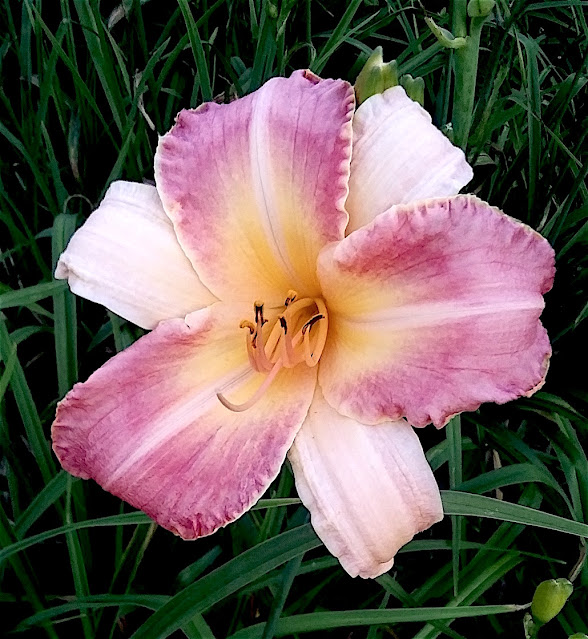 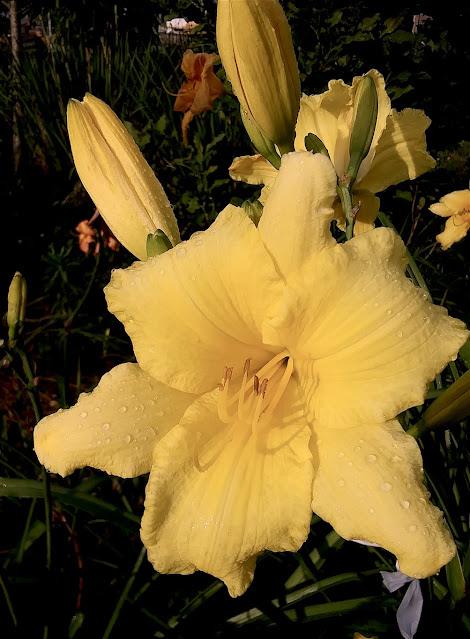 And because, yes, Far Above The World does produce beautiful yellow flowered seedlings too -
Far Above The World x Butter Cream
I think that Far Above The World is a breakthrough plant for tall daylilies at the tetraploid level. I think its combination of height, branching, great plant traits, vigor and resistance to rust and thrips, with high fertility, high breeding value for its many plant traits and the ability to produce a wide range of fancy, modern forms and colors, opens the door wide for tall tetraploid daylilies with all the bells and whistles in terms of flower, and all the hardiness and disease resistance you could want. The hardiness of Far Above The World has been tremendous in my garden and I expect it will flourish both north and south of my zone 6 location. 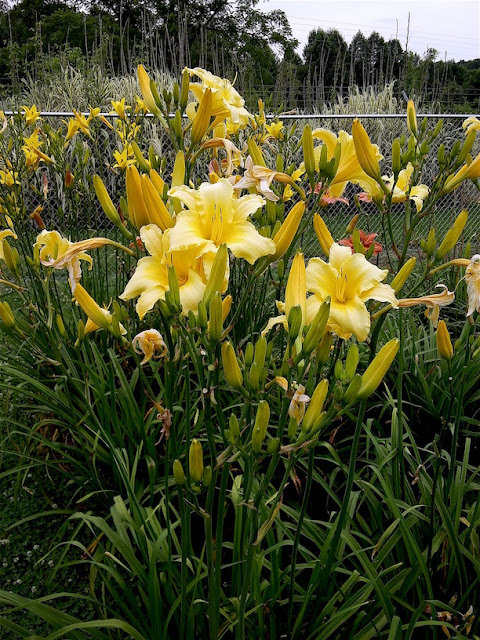