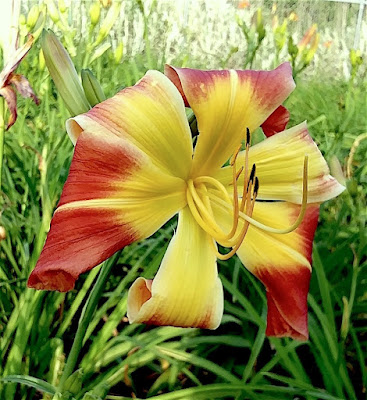 Solar Spiral is a stunning flower and a wonderful plant. I have loved its grandparent Frans Hals for decades, and another of its grandparents, Substantial Evidence, since I first saw it over a decade ago. Its parents are two of my introductions, and both are great plants and very interesting parents. Pod parent Impressionist At Heart is one of the best breeders at the diploid level that I have produced to date, and the fact that I have four new introductions from it this year, the year after Impressionist At Heart was introduced, speaks to it power as a breeder and the level of use I put it to in the hybridizing garden from its first flower in 2014. That paid off, as you can see from the seedlings I am introducing from Impressionist At Heart this year, and Solar Spiral is an exquisite testament to its breeding power. Of course, we can't forget pollen parent Wabi Sabi, who has provided that dose of WOW! that really sets Solar Spiral apart with its amazing, rolling, flat flowers. 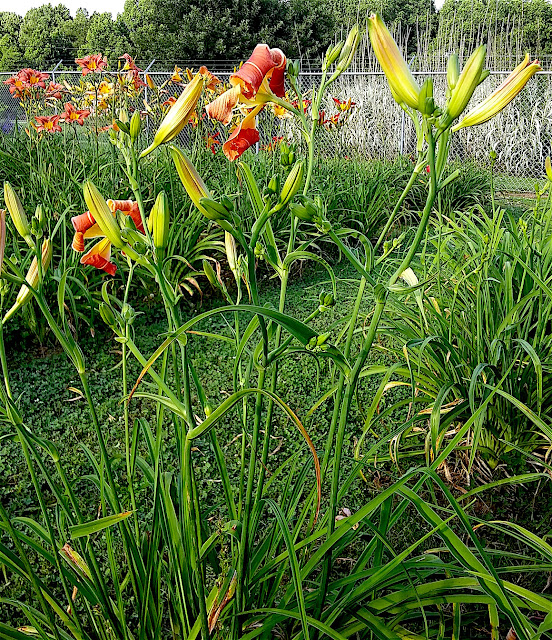 With gorgeous flat flowers that consistently open well, consistently roll and curl, and are consistently eye-catching and unique, Solar Spiral is a marvelous combination of all its grandparents and both of its parents. The coloring superficially harkens back to Frans Hals, with the bitone effect, but I would suggest that the color itself owes grandparent Endless Heart a great debt of gratitude. The clear rosy-red petals and lighter rosy-red sepals give a very bright splash to the garden. 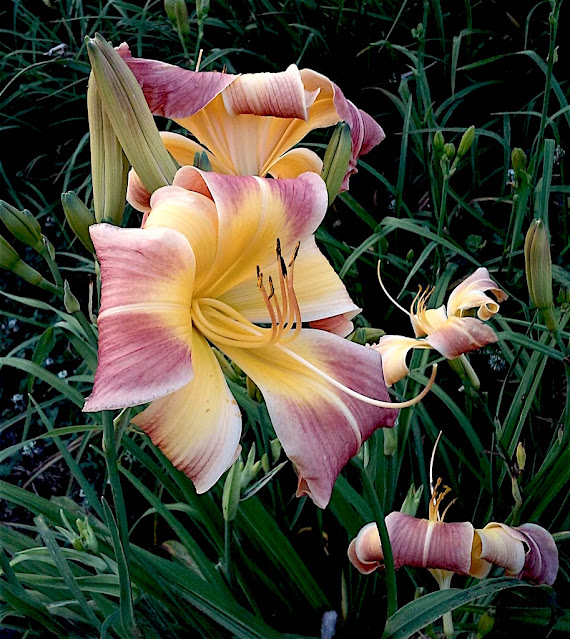 The big throat of Solar Spiral spans so far out onto the sepals that they appear to be yellow from the front, but when viewed from behind, or you unroll the sepals, you will note that they are in fact a lighter rosy-pink than the petals. The pale edge is lovely and really stands out on petals and sepals, giving a striking brightening effect to the already bright flowers. With all the bright color action, they glow! 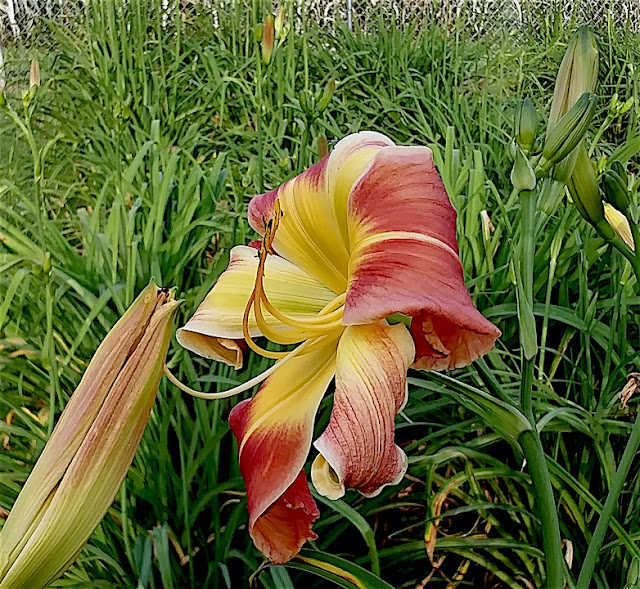 The form of the flower comes from both parents, as Impressionist At Heart is not just a normal flower, being quite flat and often curling and quilling, but it is obviously Wabi Sabi, and its parents Spider Miracle and Substantial Evidence, that have given Solar Spiral that push into weirdness beyond parent Impressionist At Heart. The length of petals, the wide flat openness, the extra curling and spiraling...that is all from Wabi Sabi, which had the 'extra' to combine with the milder versions of these traits in the pod parent and produce this bizarre beauty - Solar Spiral. 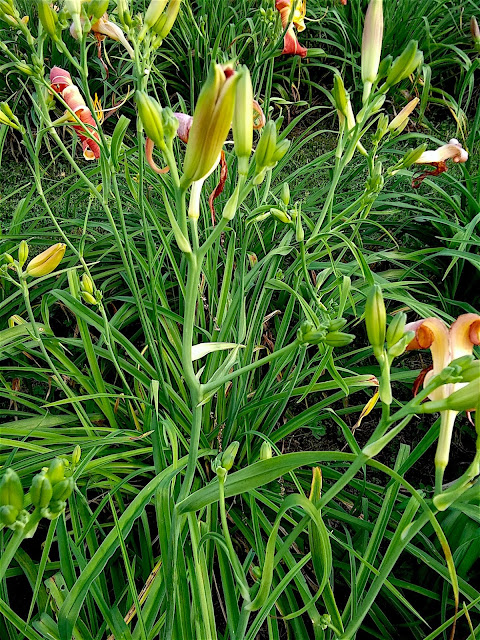 The scapes are a perfect combination of the two parents, with the branching from both, height coming from the pollen parent and scape strength combing from the pod parent. Importantly, the scapes, while a bit shorter than in pollen parent Wabi Sabi, are strong and don't fall or lean as in the pollen parent. This shows that this trait can be corrected when using Wabi Sabi over things with stronger scapes, and it has resulted here in a really fine garden plant. The five branches of registration are the average, and I have seen one or two more and one or two less on mature clumps. I have seen up to thirty buds on some heavily branched scapes. 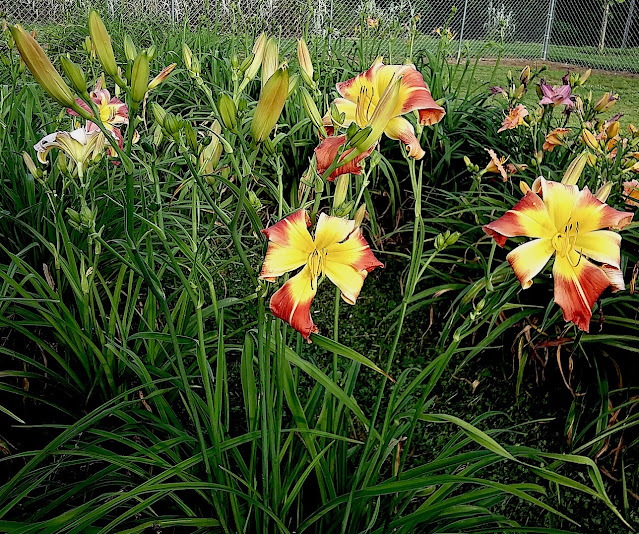 The foliage is a medium green and attractive. Bred in 2014 and germinated in 2015, Solar Spiral went through the last two years of my rust resistance screening, 2015 and 2016, and scored A+ resistance, just like both parents, through both of those years. The thrips resistance has been very good, too, and with the resistance to these pests and the fine plant traits with the gorgeous, unusual, modern flower, Solar Spiral is a very desirable garden plant. 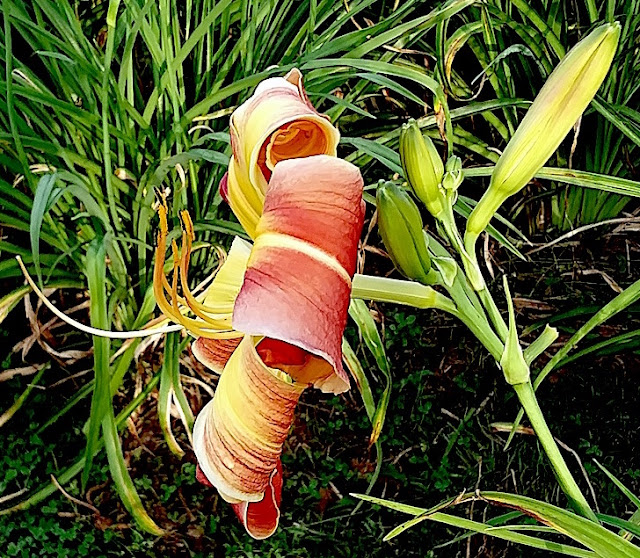 Solar Spiral shows very fertile pollen, but pods are very difficult. I have gotten two during the three years I was attempting to set on it. The pollen is very strong though and will set pods easily, so it is a good breeder and passes many of its good traits to its offspring, producing some gorgeous plants and some gorgeous, weird flowers. 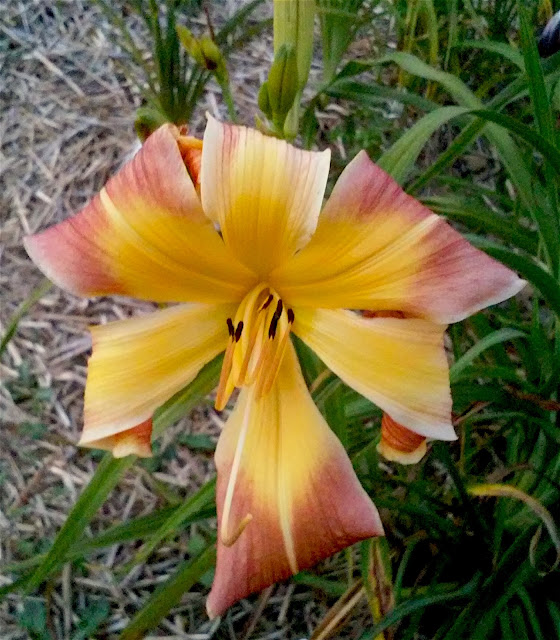 First flower, seedling bed 2016
From the very first flower in the seedling bed, I knew this seedling, which would become Solar Spiral, was something special. As it looked good every day there was a flower open, increased nicely in the very crowded seedling bed, breezed through both years of rust resistance screening and has consistently shown good thrips resistance, I knew this would be an introduction. 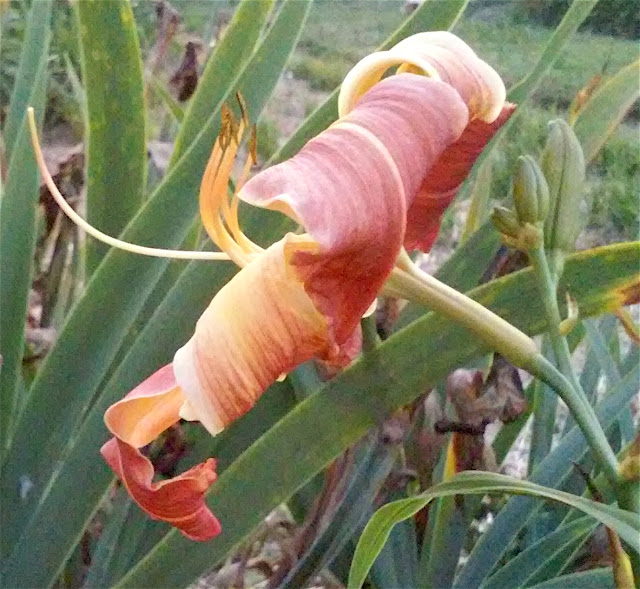 The dormant foliage of Solar Spiral is attractive and does not show summer dormancy, which I cull against heavily and does not occur in all dormant plants (despite what some might say...). The foliage goes dormant in the fall after the first freezes and stays down well until spring. It shows good tolerance to late freezes. I frequently see instant rebloom, and on occasion see late summer/early fall rebloom. The increase is excellent, and the plant has been very vigorous, hardy and recovers quickly from division. I have not seen it die out in the center of the clump after a couple of years, which means it should be able to be left in place for several years before division, for the gardener who isn't concerned with constantly increasing the plant and just wants a big glorious clump. While for those who want to divide and increase with frequency, the fast increase and fast recovery from divisions means that is possible too.
Solar Spiral is a wonderful plant with a gloriously weird flower, and unlike so many unusual form flowers, the plant is attractive and well-behaved. The resistance to pest and disease and breeding ability for its many good traits make it valuable to both gardeners and hybridizers. 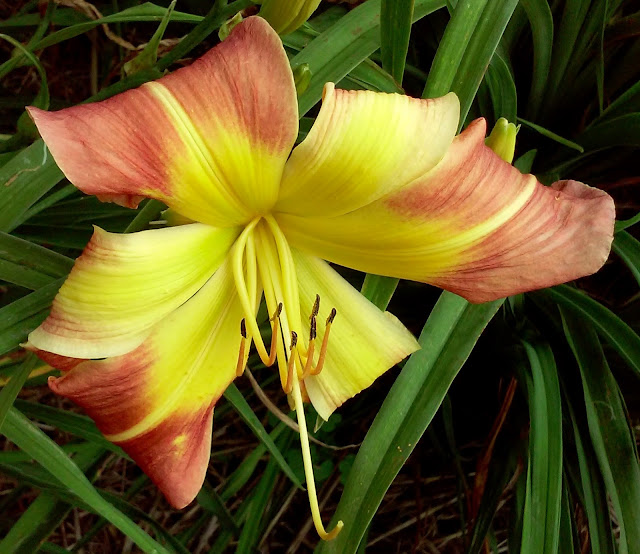