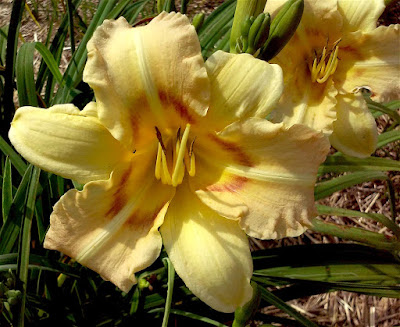 Strongly reblooming bicolor of light cream with petals layered in light pink with  cinnamon band above chartreuse to golden-yellow throat.

Substantial Impressions is another Impressionist At Heart seedling, this one with Substantial Princess as the pollen parent. It shows interesting coloring, and the layering of pink often looks like brushed layers, not unlike the strokes of an impressionistic painting. This little plant has a beautiful flower with good substance and nice form and ruffling, but there is one thing that has set Substantial Impressions apart from its first year of flowering, and that is its rebloom, which has been very strong and very consistent. 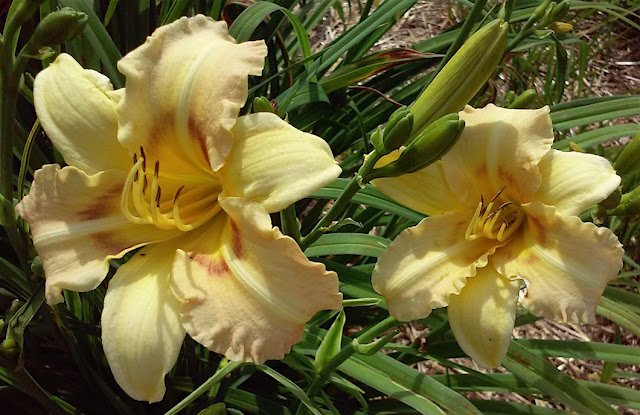 Substantial Impressions has a lovely, flat flower with good substance. The color is cream overlaid by pink with a light midrib and a triangular cinnamon band above the chartreuse to golden yellow throat. The flowers are pastel and cheery and show diamond dusting, but it is the rebloom you will want to grow this one for! 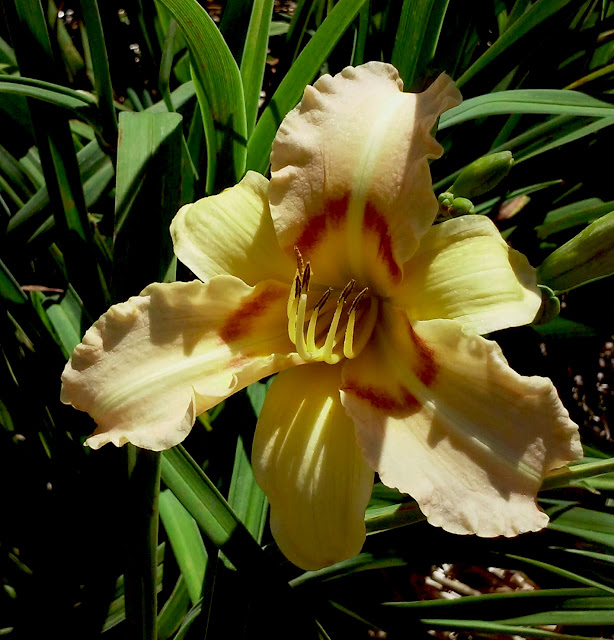 The first round of scapes start in early season, then there is instant rebloom, followed by a late summer rebloom and an early fall rebloom. I have seen it blooming until first frost here every year since it first flowered in 2015. Germinated in 2014, Substantial Impressions went through the last three years of my rust resistance screening scoring A+ all three years. The thrips resistance is very good and the fertility is high both ways. If you are interested in rebloom, then this one brings a host of benefits along with strong breeding value for rebloom. The plant shows attractive green foliage that is dormant and doesn't show summer dormancy. The late spring freeze resistance is strong and I have never seen the first round of scapes knocked out by late freezes. I am very excited by the combination of ancestors in many of my diploid lines, and especially the work I have done that has brought the Substantial Evidence genetic line into the small rebloomers, giving them much stronger substance and more open, flat flowers than had been seen in them previously. 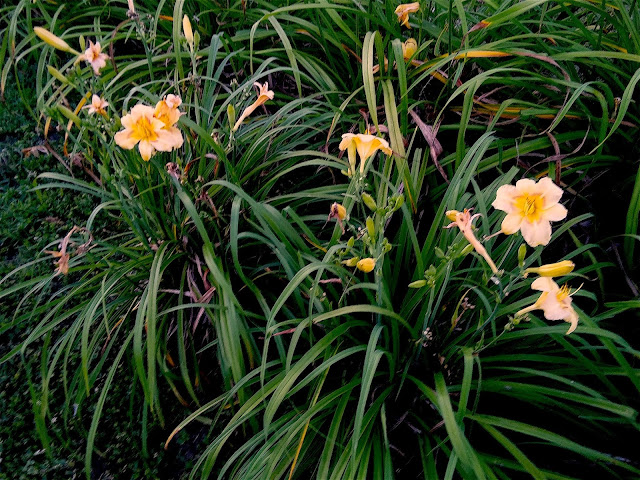 In this picture of Substantial Impressions you can see the first scapes are already dried up and past, while the second phase of instant rebloom scapes are well into flowering while a third set of scapes is rising right behind them. The reblooming has been very consistent in my garden since the first year it flowered.
Click here to go to Daylily BReeder Blog
Click here to go to Sun Dragon Daylilies website
Posted by Brian Reeder at 8:37 PM